The way I remember it, if my seventh grade English teacher caught you chewing gum in class, she’d walk over to your desk and leisurely but purposefully cup an upturned palm below your still masticating chin. You had to spit out your gum in her hand.

Did she think we’d swallow it? Stick it on a wall? Behind an ear? She thought chewing gum made us look uncouth. The word whorish might have been used in a particularly lengthy diatribe about gum chewers in prom dresses. Her gum aversion is what I most remember about her.

Not sure why that had to be a competition, but okay.

Anywho, defending The Lord of the Rings from my English teacher is my first real Tolkien memory. Closely related to it is sitting in a theater watching shrieking Nazgûl chase four frightened hobbits at the Bucklebury Ferry and being so excited to tell Ms. E how wrong she was.

Around that time, I made my first email address: legolas38@juno.com.

I was a fan for life.

Case in point, I started 2019 by rereading The Silmarillion, opens a new window. Chronologically first within Tolkien’s Legendarium but published posthumously (1977), it’s the most difficult of his three main works and more of a history than a novel. There’s a creation myth followed by an explanation of the various Gods and Goddesses of Arda, and then comes the real meat of the book, the story of the Elves. Driven by a vengeful oath, the Eldar leave paradise to wage a tragic and hopeless war on Morgoth, a fallen god. This beautiful and poetic history of Middle Earth was the literary jewel of Tolkien’s eye (simaril pun intended).

According to J.R.R. Tolkien: A Biography, opens a new window by Humphrey Carpenter, Tolkien worked on The Silmarillion’s stories almost his entire adult life. Its earliest incarnations are dated back to 1914. A gifted philologist, Tolkien relished language and derived great satisfaction from creating his own private languages. But he knew language isn’t made in a vacuum, and so he invented a history to correspond with his languages. Things just kinda spiraled out of control from there.

The Carpenter book is the first and (apparently) definitive Tolkien biography, and is a methodical exploration of his relationships, scholarship, and invented languages, and how they shaped Middle Earth. Carpenter reveals Tolkien as an ordinary Oxford don struggling to meet deadlines, a linguistic genius with an incomparable imagination, and bit of a hobbit whose wife and close friends called him Ron. 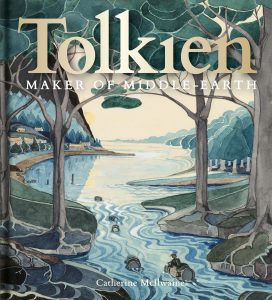 If you’re interested in Tolkien, I also recommend Tolkien: Maker of Middle Earth, opens a new window. Published by Oxford’s Bodleian Library in connection with a traveling exhibition by the same name, it sheds considerable light on Tolkien’s life and includes dozens of high quality images of him, his family, friends, letters, and (most importantly) his art. He was a real renaissance man. Learning more about him has only made me reread the rest of his books for the umpteenth time over.