The memoir Slice Harvester embraids two stories: that of the author’s battle with alcoholism and, concurrently, his quest to eat a plain cheese slice from every single pizzeria in Manhattan.

Self-described punk rocker Colin “Atrophy” Hagendorf began the project on a whim in 2009. He recorded his thoughts on his blog– archived at sliceharvester.com– and began selling a quartlery fanzine that compiled his reviews, all while working a grueling burrito delivery job and getting black-out drunk almost every night. Hagendorf took two years to finish all 362 unique slices that the island had to offer; and now, with the release of his book, you can follow his journey in an afternoon or two. 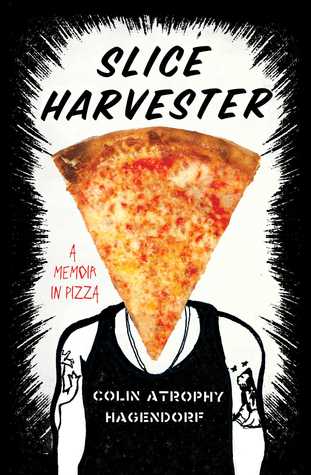 Slice Harvester is an easily-digestible 200 pages, but it’s rich with the stories of New York and the people who call it home. Hagendorf profiles the multi-cultural tapestry of each neighborhood he visits, from the kosher pizzeria Milk ‘N Honey to shops helmed by Indian immigrants in midtown. As I read, I gained a surprisingly in-depth knowledge of the East Coast punk scene, too.

Hagendorf doesn’t shy away from his flaws– he writes with disarming earnestness about his mistreatment of his parents and girlfriend. He doesn’t spare any mercy for subpar pizza either, writing “Pizza like this is ruining America,” of Blue Rose Deli’s slice.

The parallel narratives of pizza and booze are not just a matter of happenstance; ultimately, it’s the pizza that leads Hagendorf to sobriety. The quest to eat every slice gives him motivation to press on with his life, towards a beautiful and  “cheesy” conclusion.

I was hooked by this memoir the second I read the jacket description. The story unfolds quickly, despite taking time for interesting, sincere vignettes.There’s something fascinating about the landscape of pizza and culture spanning New York.  Hagendorf wields brashness coupled with humor and intellect to great effect. The author’s own battles underpin the culinary tale in a way that brings new meaning to each story. The juxtaposition makes perfect sense in its own, New York-kind-of way.

After I put the book down, I was feeling inspired. And hungry. In the spirit of Hagendorf (sans drug abuse), I set out to harvest the pizza of Lawrence.

I collected a plain cheese slice from nine local pizzerias. It’s not an exhaustive list, but it’s pretty close– eating this much pizza is harder than it looks, folks.

Glory Days: Pan-style pizza that takes me back to elementary birthday parties of the 1990s. It’s a little dense, but the crust has a superb crisp to it.

Papa Keno’s: A thin, greasy monstrosity. It’s delicious. There’s a great hit of garlic in the sauce. However, I feel like the minimalism of a plain slice hurts Keno’s more than others.

Pizza Shuttle: Like a slice of Glory Days that went to grad school. The crust reflects a greater level of care; the cheese stands out as a signature– Shuttle is a classic for good reason.

Pyramid: This is a fantastic slice. The ratios of sauce, cheese, and dough are in perfect harmony. The braided crust is a nice touch, too. If pizza toppings went extinct, this would be my salvation.

Johnny’s Tavern: A New York style super-thin crust pizza with an intriguing cheese blend. Is that a hint of cheddar? Or is it the spices in the sauce? Either way, there’s a real punch of flavor here that others lack.

Tad’s: Another New York style; this one is a little bare-bones, being mostly cheese with a scant suggestion of sauce and a wafer of crust. Don’t let appearances fool you: moreso than the other New York style offerings, I feel Tad’s has really embraced the concept and executed it well.

Limestone: Much fancier than its peers, Limestone sports a drizzle of basil-infused olive oil. The crust is on point– exactly what you’d expect from a legit wood-fired oven operation.

Morningstar NYC: Looks like a much bigger version of Tad’s, and tastes pretty similar too. There’s a higher cheese and sauce to crust ratio, though, and the cheese has a nice personality to it. A great slice, but it doesn’t have that X-factor that puts it over the top.

Rudy’s: Here we have one divisive slice. It’s a fine work of pizza craftsmanship, but it’s built like a tank. I actually really enjoy the heft of it, but here’s my beef: it’s way too dry. For the amount of dough, there needs to be basically twice as much sauce. The dusting of herbs on top adds something special, so I can understand the Rudy’s following.

Don’t take my word for it– just go eat some pizza. And read Slice Harvester while you’re at it.