I recently stumbled into the home of a woman who, with no family in the area, left her possessions to the will of strangers. As a visitor peering into her life through the lens of her belongings, I could not help but create a speculative narrative about how she spent her time and interacted with these items. Lazy summer evenings reading in the rays of the setting sun on her luxurious green velvet couch, a cuppa tea steeping in her favorite floral porcelain mug. Saturday afternoons seated at the avocado Montgomery Ward 1964 sewing machine, intermittently getting up to stretch her legs, delight in the sound of the windchimes dancing in the breeze, and flip the record. 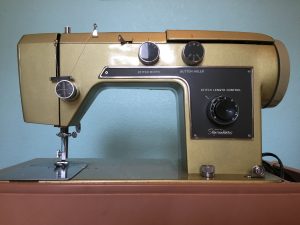 Last week, I spent an entire day procrastinating writing this blog to learn the inner workings of said sewing machine. I remarked at how, at 56 years old, it looks as though it has never been used. As I burned the top of my mouth with piping hot coffee, I noticed that the floral mug, whose inside was stark white just months ago, is now lined with stratigraphic layers of residue accumulated from the countless times I have left tea in it overnight. That remarkably pristine 1950’s era velvet couch? It now holds the unmistakable impression of two butts from the hours that I have logged reading in one corner while my partner plays the ukelele in the opposite corner.

As I procrastinated and sewed, I simultaneously worked my way through the entire series of the podcast The Anthropocene Reviewed. John Green noted that, as an author of fictional novels who now writes this non-fiction podcast, he consistently works to remind himself not to abandon truths just because they do not interest him or suit the version of the story he is telling.

Perhaps the evidence indicates that, in imagining her life and the life of these things, I was projecting a bit? The lack of use-wear on the objects that migrated from her home to mine is likely more indicative of the lives they did not live while in her possession. But that truth did not interest me.

Is it normal to create a story about the objects we stumble upon? To try to understand the past and the events that, while we did not experience, these objects witnessed?

Shannon Downey, who has made headlines for her craftivism and Badass HERstory projects, finds and completes unfinished projects at estate sales. She ran across a box of fabric hexagons, three of which had the birds and flowers of their associated state embroidered on them. Shannon put out a call to her followers to help her finish the work of Rita Smith, a 99-year-old woman. The result was powerful and drew makers from all over the country to convene and finish the quilt. All of these strangers came together because of another stranger's items.

Who knows why Rita only worked on New Jersey, Alaska and Georgia? Perhaps these three states held meaning because she had fallen in love there, desired to visit but hadn't found the time, or lived there. But she is gone. And she left these objects to be interpreted by strangers. We curious folk will do what we think its previous owner would have done with these objects. Whether or not that is in line with reality is anyone's guess. 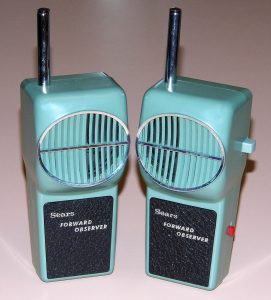 After weeks of cutting cardboard, gluing buttons, and painting the finishing touches on their creations, nine-year-old Jake and his classmates marched around wearing replicas of their favorite item in The Object Parade. This parade was the final portion of an exercise where children learned about the production and history of their object, aiming to create a more informed and conscientious consumer. The author, Dinah Lenney, tells of her attachment as a mother to the giant turquoise replica of the walkie-talkie that her son, Jake, made. Jake, however, would have happily discarded the parade costume and soon after the event he forgot about his love of the actual walkie-talkie.

In another book about reading objects, Fewer, Better Things, Glenn Adamson gives the example of the seemingly simplest of artifacts, two pieces of paper* of the same size and shape, each with one edge torn. Here, he suggests the user intended to tear one larger piece of paper into two smaller pieces of equal size. The person creating these two pieces had the basic skill of reasoning to know that by folding one side to line up with it’s parallel opposite edge, they would create these symmetrical pieces while weakening the fibers so it could be torn more easily. While it is nearly impossible to actually know the intentions of those who previously used the objects we encounter, Adamson shows that, in some cases, we can begin to understand more about the capacity or skill of these users.

For a joyful and welcome creative-fiction spin on the life of stuff, many authors come together in Significant Objects to create short stories about things acquired in flea markets. These objects were written about, photographed, and auctioned off. The proceeds of this fundraiser went to organizations such as Girls Write Now or 826 National. I highly recommend this lighthearted book, specifically starting it by learning about the life of one particular Toy Toaster** written by Jonathan Goldstein. 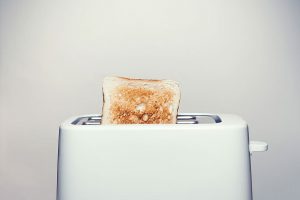 There are many ways of telling stories. Reading and writing about physical objects is one mechanism that allows us to delight in the intricacies, the potential pasts and futures, and the often overlooked or seemingly mundane features of the accumulation of stuff in our society and better understand why that stuff is important to other people. And, more often than not, why it is important to us.

*If folding paper really got you excited, join the waitlist for the next Mindful Crafting on February 8th where participants will make paper art.

**If you have an object in the form of a small machine that is near and dear to your heart but needs a little mending, come to the next Repair Studio at the library on February 28th.