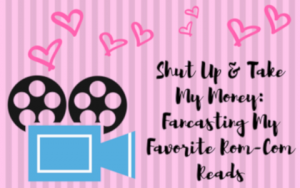 Like many people, I love a good romantic comedy. I’m always in the mood for a meet-cute, a tale-of-friends-to-lovers, a happily-ever-after (or at least for now). Luckily, as a reader of romance, I usually have a stack of rom-coms sitting on my bedside table.

The only downside to my rom-com reading habit is that I would also like to watch many of these stories, and unfortunately, Hollywood no longer seems particularly interested in making these kinds of movies. Recently, though, fellow Book Squad member Kimberly sent me the trailer for Love, Simon, an adaptation of Becky Albertalli’s YA romantic comedy Simon vs. the Homo Sapiens Agenda. I cried watching the trailer, and I cried listening to the audiobook (it’s a comedy, I swear!), and then I almost cried again when I realized the movie won’t be released until March.

Simon Vs. the Homo Sapiens Agenda

With nearly 6 weeks of time to kill before I can cry while actually watching Love, Simon (different trailer, equally worth watching), I decided to round up a few other rom-com reads I think would make amazing big-screen love stories. 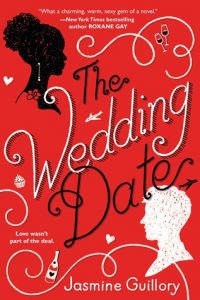 The Book: Jasmine Guillory’s The Wedding Date, an extremely charming new release about Alexa and Drew, who meet when she agrees to be his on-the-fly date to his ex-girlfriend’s wedding…and then the pair can’t seem to shake one another, despite living at opposite ends of California and not being interested in a long-term commitment.

Why It Would Make a Good Movie: It’s about grown-ups who really like each other trying to fit into one another’s lives while also maintaining their own separate existences, and frankly I think we need more romances like that in the world. Also, it actually made me laugh out loud multiple times when I was reading it – always a promising sign for a potential romantic comedy.

My Fancast: In the book, Alexa is described as being a short, curvy African American woman, while Drew is a tall, lean white guy, and I read both as being somewhere between late-20s and mid-30s. What about Danielle Brooks for Alexa and Matthew Goode for Drew?  I would watch them fall in love and eat donuts (an extremely important recurring plot point) every single day and twice a day on Sundays. 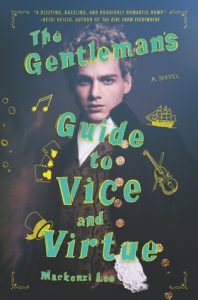 The Book: Mackenzi Lee’s The Gentleman’s Guide to Vice and Virtue, an ever-so-slightly magical queer historical YA novel about upper-class teenager Monty, his biracial best friend (and secret beloved) Percy, and his younger sister Felicity fleeing murderous noblemen across 18th-century Europe…all while Monty tries to hide his feelings from Percy, who he’s convinced doesn’t love him back.

Why It Would Make a Good Movie: Didn’t you read my description of the plot?  It’s about queer teenagers fleeing murderous noblemen across 18th-century Europe, with magic.  WHY AM I NOT WATCHING THIS MOVIE RIGHT NOW?

My Fancast: Look, I don’t know if the cover model can act, but if he can, that’s our Monty – problem solved. If he can’t, Tom Glynn-Carney has the accent and the cheekbones to pull off the role, and Justice Smith has Percy’s sweet, shy smile down pat. I think Millie Bobby Brown could nail Felicity’s serious demeanor, and she actually looks like she be Tom Glynn-Carney’s sister (I hate when actors playing siblings would never pass for related).

The Gentleman's Guide to Vice and Virtue 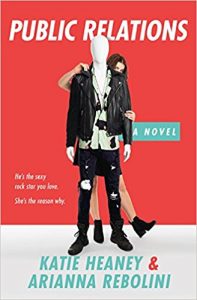 The Book: Katie Heaney and Arianna Rebolini’s Public Relations, a completely wonderful workplace romance about fading popstar Archie Fox and his public relations rep, Rose Reed, who sets out to revitalize Archie’s career by engineering a relationship for him with up-and-coming hipster musician Raya…which actually works great, career-wise, except that Rose falls for Archie herself.

Why It Would Make a Good Movie: This book did a great job of capturing how people in their mid-20s with careers actually talk to one another, and what they talk about; it sounded like conversations I’ve had with my friends. Plus, you get the on-screen contrast of Archie’s seemingly glamorous life with all the labor required to achieve it – very Devil Wears Prada - with an extra helping of “but WHEN are they going to kiss?!”

My Fancast: This was the easiest movie to cast by far.  I think The Bold Type’s Katie Stevens would make an awesome Rose, and I was already imagining Zoe Kravitz as Raya when I was reading the book. As for Archie – well. The authors flatly acknowledge he’s heavily based on Harry Styles, and try as I might, I couldn’t think of anyone else who could be the Archie that lives on the page and in my brain. And he’s known to be a fan of rom-coms!  Someone get him this script, stat!

I can pretty much guarantee that each of these movies would be a money-maker because I would personally see each of them no fewer than eleven bajillion times.

What about you?  What romantic comedies do you wish you could see on the big screen, and who would you cast in them?

- Meredith Wiggins is a Readers’ Services Assistant at LPL.