Do you know anyone who has a ton of interests? Like they dive deep into something they’re curious about, obsess over it, and then the next week, they’re onto something new? I do. His name is Murphy and he’s my twelve year-old nephew. The kid gets dangerously engrossed in things. I use the word dangerously because sometimes the stuff he gets into is suspect. For example, a few months back I was at my sister’s house and I watched Murphy casually walk upstairs to his room with a drill in one hand and a handsaw in the other, and no one even batted an eye. About an hour later, he comes downstairs with these homemade roller skates made out of two skateboards and his snow boots.

Murph started young(er). When he was five, his younger brother was due right around Christmas, Murphy worried the new baby wouldn’t have a stocking holder like the rest of the family. So he made one...out of TRIOs.

If you’re inspired to make your own holiday crafts, try this book.

As you can imagine, my sister is pretty much over replacing the items Murphy “recycles.” So, if one of his ideas goes south, that’s what duct tape is for.

Knowing him, he probably didn’t read a duct tape instructional, but someone like me would.

One of Murphy’s more recent interests is cassette tapes. He started with vinyl records but quickly realized he couldn’t be on the move. He purchased a walkman from Ebay just like the one I had in college. The idea that items I once thought were very high-tech are now selling on Ebay as retro collectibles is a bit heartbreaking, but I just like to pretend I was a trailblazer. 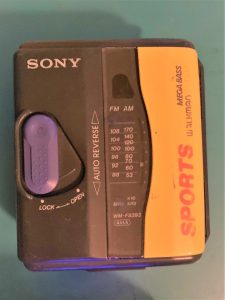 Interested in selling some of your old treasures to this new generation?

This past winter Murphy got super into horror films. He would check them out from the library and watch one a night. And with all the snow days we had this year in Kansas, he really plowed through them. His favorite? The Shining. For his birthday he made a tshirt with the entire script written on it.

Haven’t seen it? The library’s got a copy.

If the whole time you’ve been reading this, you’ve been thinking to yourself… “Now he doesn’t have snow boots for winter!” or “he’s rotting his brain with horror movies” or “Is his Mom at the end of her wit’s with this kid?!” …. I get it! As a parent myself, all of these thoughts have gone through my head. And, yes, my sister does struggle with this kid, but what parent doesn’t? For the most part, I think she tries to give him some room to grow and hopes for the best.

If you, too, have a Murphy on your hands, here are some books that may provide some guidance.

Murphy has picked up quite a few interests in his short life... skateboarding, magic, gymnastics, piano, stop-motion films, steampunk, drums, retro video game systems, cassettes, vinyl, LEGOs, heavy metal, and probably a lot more I don’t know about. But I would say my favorite thing he enjoys doing is coming to the library. If there’s one place that provides space for his running list of interests, it’s here. Check out all the library events and maybe you, too, will find something to sink your teeth into.