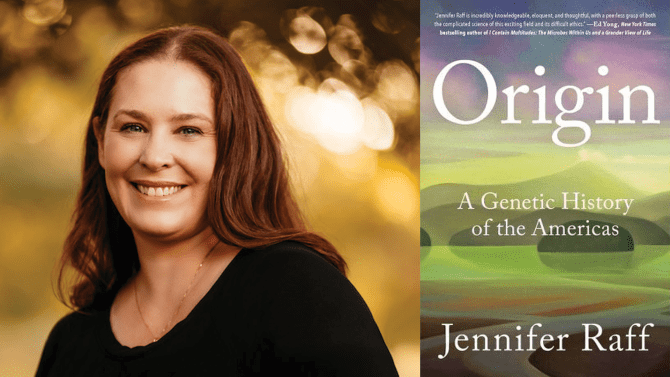 Not long ago there was an "Indian Burial Pit" tourist trap outside of Salina. Times are slowly changing. Origin pleasantly surprised me by starting with ethics, its respectful attention to Native Americans. Could you talk about how that came about for you? Did you face any pushback from publishers?

From the beginning of this project, I set out to write a book that told not only the story of what we think we know about the genetic histories of Native Americans, but how we came to this knowledge. It really is a fraught history, full of stories of harmful and abusive research practices which have led to a very understandable distrust of non-Native geneticists by some tribes. It’s our responsibility to mend these relationships, acknowledge the harms that have been done, and consciously improve our research practices. In telling this story, I tried to point out not only
the bad examples, but the examples of good, collaborative research that has been done: I think both are important to learn from. I’m very happy to count among my mentors and colleagues Native and non-Native scientists who have done this work well for a long time; I have learned so much from them, and I try to put their approaches into practice in my own work and highlight it in my writing.

My editor Sean Desmond, my agent Will Francis, and the entire publishing team at Twelve enthusiastically supported me in this. I am very grateful that they helped me write the story that I wanted to tell, to highlight the work and advocacy of my brilliant colleagues—some of whom are here at KU! I’m also grateful beyond expression to the Indigenous geneticists who served as sensitivity editors in the process of writing this book. I had five different people from several different tribes giving me feedback on content and language, and I can’t thank them enough.

What's the biggest news in the peopling of the Americas that most of us aren't aware of?

I think the White Sands site—the one that’s been dated to 21,000-23,000 years ago—is the most recent and exciting archaeological news. If the dating holds up to scrutiny, it will be really paradigm shifting. There are a lot of archaeologists who have reasonable doubts about the way these footprints were dated, but I find the responses of the excavators to their doubts to be very convincing.

Any guesses of what's to come in the story? What do you expect we'll find next?

From a genetics standpoint I think the next major findings will be coming out from Central and South America. Here at KU, Dennis O’Rourke, I, Lauren Norman, Justin Tackney, Kristine Beaty and our students are working in the Arctic and the Plains with tribes who are interested in learning about their genetic histories. We’re very excited about what we’re finding and hope that we’ll be able to share our results before too long.

Where would you visit if you could, professionally?

I was all set to make a trip to White Sands last year, but unfortunately the site was closed to all but the archaeologists working on it. I’m hoping that I’ll eventually get to go there—I’m truly obsessed with those footprints and what they might mean for human history.

Where would you visit if you could, non-professionally?

Basically anywhere in the world—I haven’t gotten to travel abroad very much and there’s so much I’m curious to see! I’d especially love to visit Rome and see the ancient sites there.

Can you recommend some books on anthropology, genetics, and/or Native American history?

For archaeology in the Americas, the very best book to read is by David Meltzer, called “First Peoples in a New World.” His thinking and writing has hugely influenced me. For more recent history and a discussion of Indigenous issues, my colleague Kent Blansett has a terrific book called “A Journey to Freedom: Richard Oakes, Alcatraz, and the Red Power Movement,” which I highly recommend.

For perspectives on archaeology and genetics written by Indigenous scholars, see “Red Earth, White Lies: Native Americans and the Myth of Scientific Fact” by Vine Deloria Jr., and "The Indigenous Paleolithic of the Western Hemisphere” by Paulette Steeves.

For forthcoming books, I’m really excited about one coming out next January by Caroline Dodds Pennock called “On Savage Shores: How Indigenous Americans Discovered Europe.”

What was your favorite book as a youngster?

I loved Jules Verne’s and Elizabeth Peters’/Barbara Michaels’ books, once I was old enough to read them! I couldn’t choose just one!

What are you reading now?

Can you share some hints on what your next book is going to be about?

It will be about more ancient genomes but I’m expanding the geographic area beyond the Americas.

[Ms. Raff had more to tell us than we had room for, so for those interested, here's a link to the full text of our interview: Full text]