Another great batch of books for children and teens have taken home this year's coveted ALA Media Awards, and we have plenty of physical and digital copies of the winning titles and honor books (aka, runners-up) for each award. A pet peeve of mine in the past has been small numbers of honor books, since it strikes me as a wasted opportunity to feature a few more very good books in each category. This year was a banner year for honor books, and for that I applaud the award selection committees. 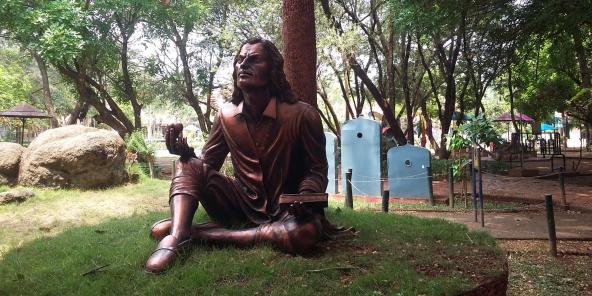 Each year I give out my own imaginary awards, which I call Elpies (because it sounds like LPL), in a ceremony that takes place in my own head and looks exactly like the part at the end of Star Wars: A New Hope when Princess Leia gives out medals to Han and Luke for blowing up the Death Star. Authors and illustrators whose books may not have taken a big award, but are great anyway, make their way up the aisle accompanied by Chewbacca, and Princess Leia is there to hand out the medals, with Casey Kasem to announce them. This year we tried to give out more honors, too. So without further ado, Leia, Casey, Chewy, here are the envelopes. Take it away.

Best Biography of a Tree

Trees have always been a thing in children’s books, but there has been a boom since Peter Wohlleben’s The Hidden Life of Trees revealed just how much chitchat is going on in the forest. This year saw the release of several non-fiction children’s books about specific trees, and since I am drawn to this subject like a flying squirrel to a woodpecker hole, let’s kick it off with a tree-related category.

The Gravity Tree, by Anna Crowley Redding, illustrated by Yas Imamura, recalls the life of the apple tree that, like the song says, beaned Newton good. Only it turns out the apple didn’t actually hit him. The tree is still there, though, so if you’re trying to come up with a good idea, you could take your chances and stand beneath it if you’re ever in Woolsthorpe, England, visiting Isaac Newton’s childhood home, where he was sent during a Cambridge University lockdown to avoid the Plague in 1665 (some good actually has come from remote learning, after all). Albert Einstein visited, and Stephen Hawking, and a piece of the tree even travelled to the International Space Station in 2010. The Gravity Tree is full of stuff like this, and you don’t even have to like apples or science to get into it.

Honor books in this category include not one, but two books about the same tree. This Very Tree, by Sean Rubin, and Branches of Hope, by Ann Magee, illustrated by Nicole Wong, commemorate the 20th anniversary of the World Trade Center attacks by telling the extraordinary story of the Survivor Tree, a Callery pear saved from the rubble, nursed back to health, and replanted at Ground Zero to serve as a tribute to all who were lost and survived.

The Hidden Life of Trees

THE GRAVITY TREE: THE TRUE STORY OF A TREE THAT INSPIRED THE WORLD

Best Book about a Chicken Circumnavigating the Globe

Who would have thought it possible to give an award in this category four years running, and to have two runners up this year? Children’s books really do make dreams come true.

The title of this year’s winner, Mr. Watson’s Chickens, is a nod to Richard Atwater’s 1938 classic, Mr. Popper’s Penguins, the original way-too-many-animals-in-the-house book, and it should find a place alongside other standards of the genre like Millions of Cats and The 101 Dalmations. Jarrett Dapier’s protagonist starts, “like any sensible person,” with three chickens, but soon has a houseful, doing stuff like playing banjo, riding unicycles, tossing pizza dough, swimming in the bathtub, and gelling their feathers into mohawks. Andrea Tsurumi’s jam-packed illustrations of these activities steal the show, and irresistibly draw in kids who will notice new things every time. In a bit of chicken ex machina, the proprietor of a travelling fair in need of a chicken choir takes the flock off Mr. Watson’s hands, and they head out of town, clearly on their way to circumnavigate the globe.

This year’s honor book is Gladys the Magic Chicken, a mythological sendup by Adam Rubin, illustrated by Adam Rex, in which a hen makes her way around a Princess Bride-esque world occupied by travelling merchants, bandits, swordsmen, princesses, pirates, and shepherd boys.

Another honor book bears mentioning, even though it was published for adults. A Sailor, A Chicken, an Incredible Voyage: The Seafaring Adventures of Guirec and Monique, is the memoir of adventurer Guirec Soudee’s 3,400-mile journey around the world on a sailboat with his pet chicken Monique, the same journey made famous in the pair's first book, The Hen Who Sailed Around the World, which won this category back in 2018.

The Hundred and One Dalmatians

A Sailor, A Chicken, An Incredible Voyage

The Hen Who Sailed Around the World

Not much explanation needed here, or perhaps so much we wouldn’t have room anyway.

The winner is Something’s Wrong by Jory John, illustrated by Erin Kraan. What’s wrong is that a bear named Jeff has forgotten to remove a recent gift from his grandma--a pair of tightie-whiteys--after trying them on. The rest of the animals in the forest, naked as the day they were born, are too polite to tell him, although he can sense something is not quite right, until a rabbit named Anders is friend enough to explain. Instead of giving him a hard time, though, Anders puts on some undies of his own, and next thing we know, they have started a forest fashion trend. Is this a tale about friendship? A parable about the importance of honesty? An allegory of existential dread? Propaganda put out by those who believe animals should be fully clothed? We may never know.

No honor books in this category. Or honor, for that matter.

Best Book with a Title So Good, Why Bother to Write It?

I love it when a title is so perfect the story seems almost unnecessary (think Hiccupotamus, or How Martha Saved Her Parents from Green Beans). The cleverest title I heard this year was Stroller Coaster, by Matt Ringler, who, lucky for us, did keep going. Illustrated by Pura Belpre Award-winner Raul the Third and his wife Elaine Bay, this frenetic picture book turns a familiar situation–a parent pushing a bored toddler around town–into the amusement park ride it can sometimes be. As the pair travels down steep inclines, past vendors, and through pedestrian tunnels, I couldn’t help but remember pounding the pavement around some of Lawrence’s own best stroller coaster-ing spots: the sidewalk along Indiana St. leading down the Hill from the campus of KU, the Lawrence Farmer’s Market, and the Pinckney pedestrian tunnel below 6th Street.

Best Book That Will Make You Cry

I admit, I’m quick to cry while reading or watching a movie, especially if my kids are around so the tables are turned and they can comfort me for a change. This year, the best book for this purpose was Twenty-One Steps, written by Jeff Gottesfeld, and illustrated painstakingly (to match its subject matter) by Matt Tavares.

At age 10 I was irreverent about almost everything, but even I stood awestruck and speechless when my parents took me to the Tomb of the Unknown Soldier at Arlington National Cemetery, where I watched a soldier take 21 steps in one direction, pause for 21 seconds, make a 180 degree turn, and do it again. That was over 35 years ago, and the tomb has not seen an unguarded moment since, for a sentinel keeps watch, 24 hours a day, 365 days a year, in all weather, forever, over this unknown comrade who made the greatest sacrifice, and has come to represent all those who have done so. Twenty-One Steps puts the reader there and explains the history of how a place dedicated to the nameless, faceless lost became one of the most famous monuments in the world.

An honor book in this category is The Lost Package, by Richard Ho, illustrated by Jessica Lanan, an homage to the U.S. Postal Service (see, I told you it’s easy to make me cry) by way of a story about a lost package and its unlikely journey across the country.

Ah, bedtime. A warm blanket, a soft pillow, a bedtime book, kids jumping around the room, starting new craft projects, refusing to help look for precious items suddenly lost, or just totally ignoring you. Might as well read them a book about kids walking around all night instead of sleeping, right? Maybe reverse psychology will kick in. Isn’t it pretty to think so?

This year’s winner is Moon Pops, by Korean author/illustrator Hui-na Paek, a dreamy tale of a night so hot the moon melts, and no one can sleep until grandma makes popsicles out of its glowing juice to cool them down. Paek’s photo illustrations of tiny dioramas lit by points of moonsicle light conjure a magic rarely seen in picture books.

Two runners up in this category are The Night Walk by Marie D’Orleans, and The Midnight Club, by Shane Goth. Night Walk tells of a family’s hike up a small mountain in the wee hours, illuminated by wondrous moonlight until the surprise arrival of sunrise. The Midnight Club reveals the premeditated late-night wanderings around the house of a pair of young kids and their cat. These are both great books, but check them out at your own risk. I can’t in good faith recommend anything that encourages kids to ask their parents to take them hiking in the middle of the night, or to sync their sleeping schedules to that of the family cat.

Well, there you have it, the 2022 Elpies are in the books. Until next year, for Princess Leia, Casey Kasem, and Isaac Newton, may the Force be with you, keep your feet on the ground and keep reaching for the stars, and remember, you don’t need an apple to fall on your head to have a good idea.  Oh yeah, and Chewy says, MMMGRAAAAAAAAHHH!