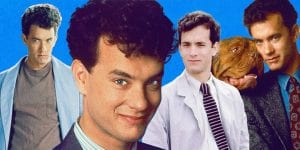 Have you ever wondered what it would be like in the 9th realm of Hell? I imagine the first order of business is being forced to watch the movie Punch Line on a loop, where Tom Hanks and Sally Field play struggling stand-up comics while being the least funny people on earth. The corny and exhausted bits on repeat for eternity will leave you wishing you’d repented your sins. The demons surround you, their stretched-out faces thrown back in laughter, like a puppet from Genesis’ Land of Confusion video.

“But none of this is funny!,” you’ll think to yourself for 60 billion thousand years. Why is everyone laughing when you want to cry or possibly throw up? Were you an extra bad person? It sure seems like it because your punishment also includes an eternal scene of Sally Field and Tom Hanks attempting some sort of romantic chemistry that goes nowhere and leads to nothing (except for the wasted talent of John Goodman who plays Sally Field’s jealous and cantankerous husband).

Never in my 46 years on this earth have I hated a movie as much as I hated Punch Line, and I watched BACHELOR PARTY just a few months ago! This is how part two of my Year of Hanks began: like I’d been launched into the depths of hell. (If you're new to this, you can check out Part 1 of my Year of Hanks here.)

Now that we’ve gotten Punch Line out of the way, we can move on to the movies that won’t make you feel like you’re being punished.

OK, admittedly there is a slight feeling of punishment with this one but at least Hanx isn’t trying to kiss his Forrest Gump mother, Sally Field! Nothing in Common stars Jackie Gleason who plays Hanks’ ailing, insufferable father. Gleason's character is thrown into an existential crisis after his wife leaves him and he has to rely on help from his estranged son. He's got health problems, a bad attitude, and suffers from the ailment known as Toxic Masculinity. Personally, I’m a little tired of movies about mean, old men who we're supposed to find endearing at the end, but that’s what so many films were like back in 1986.

I’m guessing everyone knows the plot of this movie but a quick synopsis is this: 12 year old Josh Baskin puts a coin in an unplugged Zoltar genie machine and wishes he were big. He wakes up the next morning as an adult. At one point he jumps on a giant piano thing in FAO Schwartz.

Big was the movie that gave me the most anxiety, worrying it wouldn’t hold up to my adult, now-a-parent-to-a-teen eyes. My main fear was the relationship between adult Josh Baskin (Hanx) and Susan (Elizabeth Perkins). Would it feel creepy and inappropriate, since “adult” Josh Baskin is actually 12 or 13 years old on the inside? I’m not sure how they managed to pull it off so it didn’t feel that way, but they really did. ("They" being Hanx, Perkins, and director Penny Marshall.) There are some questions about Big you may find yourself asking such as, "Why don't the parents have a police detail outside of their house at every given moment now that their son has gone missing?," and "Would a 12 year old truly find a 30 year old, uptight, smoker sexy?" But these are questions we must ignore if we want to enjoy Big, and frankly, I am willing to ignore them wholeheartedly. This film is a classic for a reason. Tom Hanks is charming beyond belief as the new hire for a toy company where his childlike innocence and genuine love of toys gets him promoted at record speed. He spends all of his paychecks on things like candy, bunkbeds, and trampolines. Elizabeth Perkins will jump on said trampoline in a tutu-esque dress in what will become one of the most iconic scenes in film ever. Five stars.

I jumped ahead in the order a bit because I was on a plane and Sleepless was offered as in-flight viewing. This is another classic Hanks film that barely needs a discussion because it’s part of the fabric of our lives now. But, I would like to say that despite its flaws, I love this movie. It’s cheesy, stalkery, completely unrealistic, etc. But, it’s sooo cute and Tom Hanks plays a grieving dad who’s ready to move on with his life perfectly. Also  Meg Ryan is so preciously Meg Ryan-ey here. When she sings Christmas carols alone in her car and says, “harses” instead of horses? I want to meet her at the top of the Empire State Building and give her a hug. Rosie O’Donnell portrays the best friend / sidekick of Meg Ryan’s with vigor. Do I think a radio DJ should manipulate your son and invade your privacy to try and get you to go on a date after your wife has died? No. Well, maybe. I mean, it makes for a good rom-com!

Joe Versus the Volcano: WE ARE DEEP INTO THE MEG RYAN YEARS HERE, PEOPLE. Tom Hanks plays Joe who has a boring, clerical job on Staten Island that seems to be killing him. His doctor tells him he has a brain fog and only a few months left to live. The adventure ensues from there. This movie is so weird with Meg Ryan playing three characters and Abe Vigoda playing Tobi, Chief of the Waponis on the island. It goes from a quirky Sisyphean vibe in the beginning to a quirky Indiana Jones vibe at the end. I loved it!

Turner and Hooch: Oh, no. No no no. I did not expect to like this movie and was fully prepared to write a similar review for this one as I did for Punch Line. But, oh god, I actually thought it was cute. I mean, it’s a buddy movie with a dog. No one should like this. But I did. I will not elaborate further and I will accept no questions at this time.

The 'Burbs: IMDB’s description of The 'Burbs is perfect: “An overstressed suburbanite and his neighbors are convinced that the new family on the block are part of a murderous, satanic cult.” The cast includes Bruce Dern, Carrie Fisher, and Corey Feldman when he was going through his Michael Jackson phase. I don't really understand why so many directors and costume designers allowed Feldman to wear his MJ garb in their films, but they did and now we have this wacky sub-genre of cinema where a Michael Jackson jacket is worn for absolutely no reason. In 1989, Feldman was popping up in films dressed as Jackson and we just accepted it. We didn't know any better. The '80s were wild.

Coming up next in My Year of Hanks - Tom Hanks Part 3: The Oscar Years! The road to '90s Hanks has been long and paved with good intentions but the films we are really waiting for are coming up just around the corner. Stay tuned for my commentary on Forrest Gump, Philadelphia, Saving Private Ryan and more. No Michael Jackson jackets required...or allowed.