“So she sat on the porch and watched the moon rise. Soon its amber fluid was drenching the earth, and quenching the thirst of the day.”  ― Zora Neale Hurston,  Their Eyes Were Watching God 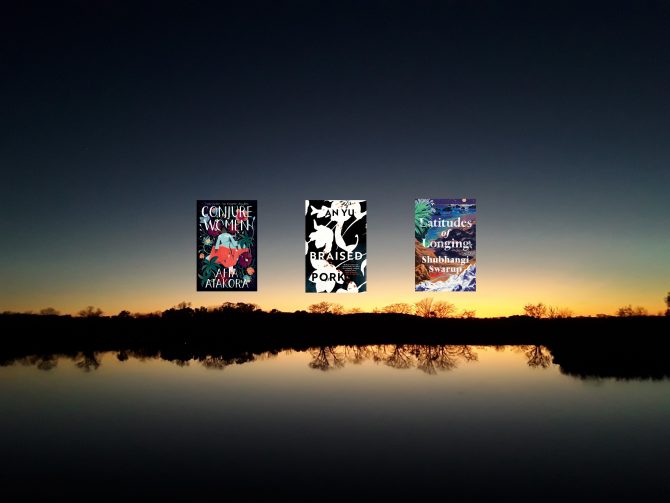 By good fortune, I’ve gotten to read three new diverse novels which infuse magical realism in the natural world. In addition to Earth-bound mystical elements, each author is debuting her first book and presenting resilient characters in immersive & evocative tales. Read on to find out about these new books, followed by my own recent transcendent nature revelry!

Conjure Women by Afia Atakora is lyrical and character-wise with Rue at the center of this story; she’s coming-of-age and learning to be a midwife from her mom, May Belle. They are the Conjure Women on the southern plantation where they are enslaved. Including homage to folklore—mysterious natural elements are revealed in vivid scenes as Rue searches for medicinal wild plants and foxes wonder the woods. With suspenseful shifting timeframes, inspiring and compelling insight into human nature, community and the heartbreaking eras before and after the U.S. Civil War (antebellum and reconstruction), this is a highly engaging story. Conjure Women was just published April 7 by Random House.

Author Afia Atakora was born in England, but grew up in New Jersey. Her parents immigrated from Ghana. Random House shared an Interview with Afia Atakora, opens a new window that includes much insight, printed in Library Journal October 14, 2019; Random House gave me permission to share an excerpt from this interview.

Q) Who do you see as likely fans of this book? What do you most hope they will take away after reading it?

A) Conjure Women, as the title suggests, is certainly about women, plural. Be they black, white, mothers, daughters, young or old, I tried to encompass a variety of female experiences that feel as true to the 19th century as they do today. I hope that the novel itself feels like a vivid experience, one that needs to be talked about and considered and shared and to that end it will appeal to book groups of all types. My writing background is as much “literary” as it is “cinematic,” appealing to fans of historical fiction and psychological thrillers. With Conjure Women I aimed to focus as much on the rich language as the intricacies of a moving, entertaining plot which marks the novel as well suited for a grad student’s syllabus as it is for a drug store spinning rack. Lastly, Conjure Women is very much a project of this fraught, self-reflective time in history we seem to have landed ourselves in. America is taking a look at itself, its triumphs and its sins, all the things that need to change, or the things we thought we’d changed and haven’t yet. I hope I have written Conjure Women as an exploration of race and gender, of lies and truth that is just as complicated and multi-faceted as the people that will read it.

Find more mystical and haunting tales with connections to the antebellum era of slavery by Black, African diaspora and African American authors in this list in the Library’s catalog: Conjure Women by Afia Atakora --- What to Read Now, opens a new window.

The second new book with magical realism is very different from the first. Braised Pork by An Yu features Jia Jia, a young Chinese artist, as she explores the elusive mythology of a half fish and half human creature sketched by her husband just before he died. A cinematic & melancholy yet hopeful journey into watery symbolism, Tibetan mythology and contemporary life in Beijing, China finally leads Jia Jia to discoveries with relationships, family secrets, and facing grief. I was not expecting the surreal revealing connections at the end, but I'm grateful! Author An Yu grew up in Beijing, but studied in New York and writes in English. Braised Pork is officially released on April 14, published by Grove Press.

Author An Yu grew up in Beijing, but studied in New York and writes in English.

Weike Wang, author of the candid and funny PEN/Hemingway Award winning debut novel Chemistry, opens a new window said about Braised Pork: “Yu is a fantastic storyteller. The prose is sly and controlled, yet page after page, I found myself spellbound by a story that does what all writers hope to do, which is to make the familiar unfamiliar.”

Also unique from the previous books, Latitudes of Longing by Shubhangi Swarup is place-based eco-fiction which emphasizes Earth’s powerful forces, including earthquakes, monsoons and more—in remote parts of India and more of south Asia following India gaining independence from the U.K in 1947. Relationships between eccentric and charismatic people and also human connections to nature are prominent in this novel of linked stories. At the opening of the book we meet the newly married Chanda Devi—who communicates not only with ghosts, but everything of the Earth and her husband Girija Prasad, a scientist. Reading of their romantic connections is as beguiling as watching flowers blossom in the best time-lapse video.

Latitudes of Longing publishes in the U.S. on May 19 by Random House; when first published in India in 2018 this book won the Tata Literature Live! Award for Debut Fiction. As a journalist, author Shubhangi Swarup has also won awards for gender sensitivity in feature writing. She lives in Mumbai, India.

If you're inspired to explore these nature-infused, magical reads I believe you will also find yourself enchanted and transported within their stories!

Finally, I feel compelled to share a couple of my own recent moments with Earth-bound magical realism. I crave being in wild open spaces and visiting the places where land and water meet have a magnetic draw for me. Encountering wildlife can be an enchanting or mystical experience. By good fortune, during a recent walk at the Wakarusa Wetlands I arrived as so many red-winged blackbirds were all chattering at once their song resembled a loud waterfall! And when I visited again the following day I looked up as hundreds of very large birds were flying over—heading southwest. If I hadn’t looked up I wouldn’t have seen them because they were completely quiet in their ethereal & synchronized flight! When I shared my photo with several friends afterwards I learned the birds were American white pelicans.

I am also inspired to acknowledge traditional Native lands. In our region near the Kansas and Wakarusa Rivers, I want to honor the Dakota, Delaware (Lenape), Kansa (Kaw), Kickapoo, Lakota, Osage, Sac and Fox, Shawnee, and actually hundreds more tribes who find connection here with Haskell Indian Nations University. As Ken Lassman (author of Wild Douglas County, opens a new window and Kaw Valley Almanac, opens a new window) noted: “Haskell Indian Nations University is the United Nations of tribes, with members of hundreds of tribes coming here over the lifetime of its existence.”

My gratitude to each of the authors and publishers for sharing advance review copies of each book.

Thanks to Kimberly Lopez, Book Squad teammate, for recommending that I read Conjure Women.

Appreciation to Denise Low, opens a new window for helping me make sure I acknowledged each Native American tribe by their preferred name.