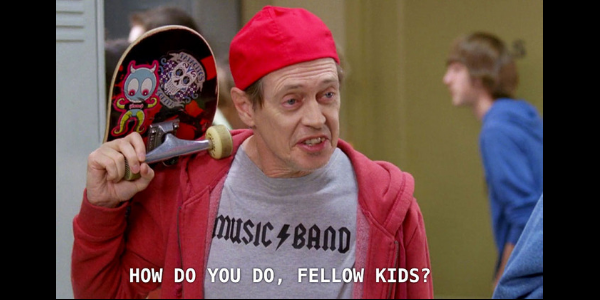 2018 was kind of a stinker. Personally, nationally, globally.

It was also the year I turned 30. All of a sudden, Hyvee cashiers are calling me sir.

And even though a majority of my brain KNOWS that 30 isn't old, part of me feels ancient. And it's only going to get worse!

A couple of years ago, a friend of mine went to a Kendrick Lamar, opens a new window show. Before the concert, he posted that it’d be the first time he’d see an artist younger than him play live. This year, I had a lot of similar moments. Here are some of my favorite people who made me feel old in 2018.

Snail Mail, AKA Lindsey Jordan, was just 18 (!!) when she released her debut album, Lush, opens a new window, last year. A smart, confident, and achingly earnest album, it collected rave reviews and more than a few early Liz Phair comparisons and quickly became one of my most listened to albums of the year.

Next up? Tillie Walden, age 22. On A Sunbeam, opens a new window, her webcomic turned handsomely published graphic novel, appeared on my radar thanks to an Atlantic article, opens a new window claiming that her “science-fiction universe of queer love, crumbling ruins, and magical forests[…]might piss off the genre’s purists.” Color me intrigued! And apparently not a sci-fi purist, because I loved this heartwarming found family adventure. Walden’s Miyazaki-esque artwork is tremendous as are her limited color palettes and stunning visions of space.

A duo of actresses who starred in 2017 movies are my next twenty-something talents—I know this is supposed to be a 2018 list, but I didn’t see these movies until 2018, so I’m counting them.

Twenty four year old Saoirse Ronan played a strong willed, lovable, trying-to-figure-it-all-out high school senior desperate to get out of her hometown in Lady Bird, and Margot Robbie, age 28, gave a standout performance in the titular role of I, Tonya, one of the funniest and stupidest and surprisingly humane movies I had the pleasure of seeing last year. I was only six when the whole debacle went down (1988 birthday, remember?), so the whole movie was pretty much news to me.

Now to the small screen. I’ve already written plenty, opens a new window about how much I love the recently-ended Adventure Time, opens a new window, but I want to reiterate my undying appreciation for voice actor Jeremy Shada. Shada, age 22, has been voicing Finn, the tween to teen protagonist of the show, for almost ten years now. Listening to him grow up before our ears really added an extra layer of character to one of TV's most charming young heroes.

Noelle Stevenson, opens a new window, age 27, branched out from comics, opens a new window to TV this year with her reboot of She-Ra and the Princesses of Power for Netflix. Once again, as an ‘88 baby, I missed both She-Ra and He-Man in their heyday. If we’re being honest, apart from a really wonderful (noncanonical) youtube video, opens a new window and “By the Power of Greyskull,” I didn’t know a lick about Eternia, the Masters of the Universe, opens a new window, or any of it. Now for the first time, I’m interested. Sign me up for another season of Stevenson’s generous, fun loving, and big-hearted show.

Last, but not least, I want to highlight Matt Thorson, age 29, who made one of the best games I played all year. Celeste, opens a new window is a tough as nails platformer about scaling a mysterious mountain. It features a terrific chiptune soundtrack, a gorgeous 16-bit aesthetic, a compelling message about self acceptance, and most importantly, a jump and dash mechanic to die for. Not bad for a guy who’s yet to see his third decade.

So that’s that! In case any +30s are still reading and feeling left out, my favorite album last year came from none other than the nearly septuagenarian Boss himself. The Roxy July 7, 1978, opens a new window is an official recording of the the heavily bootlegged LA show Springsteen played...wait for it...when he was 28!