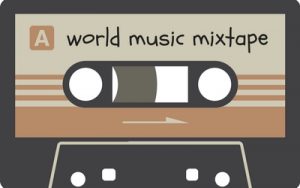 Hoping to make up for lost time, I asked my coworkers to share some of their favorite albums from our World Music collection. Here are their responses:

Dom La Nena’s Ela is a hauntingly beautiful debut that combines elements of classical string music with subtle samba beats to create a unique form of cello pop. Her melancholy vocals, sung in Portuguese and occasionally Spanish, reflect emotional sincerity and depth that aren’t always so easily conveyed by such young artists. Admittedly, nearly all of the lyrical meaning is lost on me, as I don’t speak either language, but that doesn’t impede my appreciation of her gentle, flowing vocal delivery. And while each of these songs could stand as solo pieces, I can’t help but listen to the title track “Ela” on repeat. The raised heartbeat rhythm, gradual introduction of strings accompanying Dom’s cello, and her breathy vocal delivery leave me gasping for air by the song’s end.

Julieta Venegas, Mexican singer-songwriter, comes for your heartstrings in her fifth album, Otra cosa, with a delicate balance of home, memory, rejections, and love. It’s a mish mash of all that is forlorn and sweet about the intimacies that we carry with us long after they have ended. A worthwhile listen while you’re on your way back to yourself after heartbreak, even when self-initiated. “Ya Conoceran” is one of my favorite songs, full of lyrical aches and triumphs.

Do you realize how impossible it is to pick just one World Music artist? Stymied, I choose a true master, a man who was active in the global music scene for over sixty years. A giant in his native land, his reach ranged from classical violinist Yehudi Menuhin to Philip Glass, from The Beatles to The Byrds, from the stage at Woodstock to the Oval Office. He could be heard on Hollywood soundtracks and just up the road at Lawrence’s Lied Center.

Sitar master Ravi Shankar, of course. Listen and be transported.

Funky horns and infectious guitar lines abound; Fela Kuti‘s Zombie is a fabulously orchestrated example of Afrobeat from the pioneer himself.Threaded between the vibrant instrumental sections are Kuti’s Nigerian Pidgin English lyrics, which build and eventually culminate into catchy melodic chants. It is worth noting the political fervor behind this record, with Kuti’s lyrics being particularly critical of the Nigerian government and military (so much so that he saw an unfortunate reaction from the government). Music that causes political reaction, to me, is inherently cool. It is powerful. Funky, empowering, and endlessly groovy, Zombie is a must-listen for funk music lovers new and old.

The distinctive sound of Paul Simon’s 1986 album Graceland , opens a new windowowed much to the backing vocals by South African male choral group Ladysmith Black Mambazo. Three decades later, the group’s newest album for children, Songs of Peace & Love for Kids & Parents Around the World, was nominated for a Grammy. The album contains songs about racial and gender harmony, a tribute to Nelson Mandela, even a Zulu version of “Old MacDonald Had a Farm.” That the group makes interesting a song most American kids have heard hundreds of times is a testament to the transformative power of exposure to a culture different from one’s own via music. Plus, it’s just plain fun to learn the Zulu words for the sounds that dogs, cows, goats, and pigs make.

Thanks to everyone for sharing. Do you have any favorite world music albums? Is the library missing any seminal works? What else should I be checking out?

Oh, and in case you’re wondering, apart from Who is William Onyeabor, opens a new window?, one of my very favorite albums in our world music collection is French-Chilean rapper Ana Tijoux’s Vengo. Its unapologetic feminism and confidant progressivism goes hand in hand with its stylistic diversity. Triumphant trumpets and badass pan flutes (who knew?) abound, but pale in comparison to Tijoux’s fantastic multifaceted delivery which manages to be simultaneously ferocious, optimistic, and a dozen other emotions all at once.