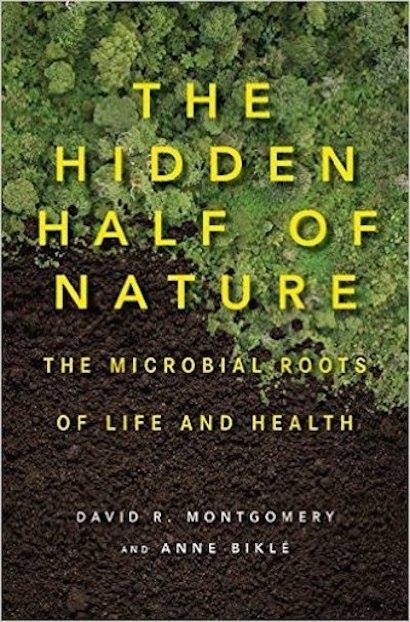 While waiting for signs that winter is in fact waning and that it’s time to dig my hands in the dirt, pruning fruit trees is one of my favorite activities. As I thin and train branches, I ponder recent discoveries of tree health: how soil bacteria and fungi spread and exchange nutrients, how to encourage them, and how they even spread all the way up and around the outside surfaces of trees. Michael Phillips’ The Holistic Orchard, opens a new window  has much more on this.

But now that spring has arrived, it’s time for veggies. A few years ago we moved our garden to a new spot and since then have added loads of mulch and compost to try to get the soil life thriving— only to see the amendments disappear. Where does it all go? There’s been a noticeable increase in the populations of earthworms, beetles, and bugs, and yet…

Well, I just unearthed the newest book by David Montgomery, co-authored by Anne Bikle. Montgomery is a geologist who I heard speak a few years ago about his previous book, Dirt: The Erosion of Civilizations, opens a new window., opens a new window  In his new one, The Hidden Half of Nature: The Microbial Roots of Life and Health, opens a new window he relates similar new-garden experiences and asks the same question. The answer, in a word, is microbes.The Hidden Half of Nature is an enjoyable read, not at all too scientific, and Montgomery is a dexterous writer who’s not afraid of incorporating some real-life experiences and subtle word play to keep it lively. I really enjoyed this book, which continually surprised me by calling to mind old connections. His book Dirt could have been lifted from the sustainable agriculture curriculum I once studied. Some of the same ideas and actors reappear as he lays the groundwork at the start of his new book. The subsequent discussions of microbe-human interactions in The Hidden Half of Nature brought to mind Rob Dunn’s book, The Wild Life of Our Bodies, opens a new window, which I reviewed a few years ago.

But reading it took me much further back, to when I attended a big-deal conference on biodiversity that took place before most had even heard the term “biodiversity.” James Lovelock and Lynn Margulis of Gaia fame were there, and Margulis in particular plays a role in Montgomery’s new book. It was she who suggested that the cells we are made of started as the symbiotic union of different kinds of bacteria. I wasn’t the only one in the crowd who was fascinated by this notion – many scientists were, too, and not a few were skeptical. In the years since she has been proven right.

Montgomery does an admirable job of fleshing out the history of our knowledge of microbes that led to Margulis’s insights, from Anton van Leeuwenhoek and his rudimentary microscopes to Louis Pasteur, Alexander Fleming, who discovered penicillin in the soil, and Jonas Salk.

Pasteur’s advances shined a new light on bacteria, but Montgomery points out that after Fleming and Salk’s successes, research tended to “isolate and destroy particular pathogenic microbes” with anti-bacterial drugs and vaccinations, rather than strive to understand the processes of the vast microbial world. Just as with the natural history of larger flora and fauna, description preceded ecological study. It took some time for us to realize, as Montgomery says, “I am not who I thought I was. And neither are you. We are all a collection of ecosystems for other creatures.”

Montgomery then moves to scientist Selman Waksman’s study of the collections of ecosystems in soil and considers industrial agriculture and the widespread use of pesticides. From there it’s a quick jump down the gullet and into the human microbiome, studies of which have exploded in just the last few years. The parallels are many– Montgomery talks of the “inner soil” of our guts affecting nutrient uptake, for example, how adding fiber to our diet is like adding organic matter to our gardens, and how antibiotics can, like herbicides in the soil, act against us in unpredictable ways.

Grab The Hidden Half of Nature and dig the latest dirt on the microbes that live within you and the earth. Dig your hands in the diverse ecosystems of your garden. Recalling Margulis’s point that your cells are symbiotic microbes, embrace some personal rewilding.