I’m not exaggerating when I say that Marvel’s Spider-Man (2018) for the PS4 is the best Peter Parker has been written in over a decade. I may go so far as to say that this game has the most solid portrayal of Peter Parker in any Peter Parker-centric story. Now, I know that’s a big claim. Peter Parker as Spider-Man has had seven different solo films from 2002 up until the present day. Even though each different Spider-Man film catches different facets of the character, I would argue that Tobey Maguire, Andrew Garfield, and Tom Holland don’t quite encapsulate everything I love about the character. Tobey Maguire’s Peter is nerdy, Andrew Garfield’s Peter is snarky, and Tom Holland’s Peter is young and relatable. The Peter Parker of this game is all those things in perfect balance.

As a game, Marvel’s Spider-Man is an exciting romp with solid mechanics and a good story. You follow Peter as Spider-Man following the arrest of Wilson Fisk, the Kingpin of Crime. After Fisk’s arrest, other gangs swarm to fill the void and take control of New York. Now, the main plot is fun, but the side missions where you get to breathe and explore the city are where you get to really spend time and learn to love this characterization of Peter. 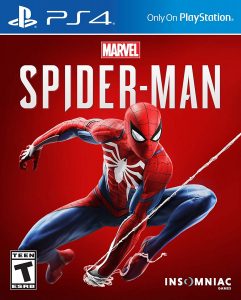 One of the first side missions that lets Peter shine and lets you as the player learn to love the city around you is one where you find old backpacks Peter hid around the city during his early years as Spider-Man. Each backpack has a unique item in it that tells a story about Peter’s past without pulling the player away from the main story. You find big, action related items like a vial of the Lizard’s blood or a piece of Shocker’s costume. You also find an apartment application filled out by Peter and Mary Jane, a flower from senior prom, and a menu from the first date Peter and MJ ever had. I really loved finding all the backpacks because it provided a more fleshed out vision of who this game’s Peter Parker is. He’s sentimental, loving, forgetful, and kind of a mess. Peter, why do you own so many backpacks? This gives the player a sense of what this particular Peter has been through over his years as Spider-Man. If you want a similar eclectic tour of Spider-Man, I would recommend the Amazing Spider-Man Omnibus, which explores the Web-Slinger’s early days.The Amazing Spider-Man Omnibus

The other two side missions that really solidify this Peter Parker in my mind as the best version of the character come a little later in the game. As a penniless graduate student myself, I HEAVILY relate to this Peter Parker. He’s broke, constantly late, and trying his hardest. He has so many responsibilities to balance and he doesn’t always get it right. Of course, Peter is late to work because he stopped a mugging and I’m late to work because I overslept. This game heavily explores how being Spider-Man impacts Peter’s private life. At one point in the game, Peter is so busy saving the city that he forgets to pay his rent. During different missions, you get calls from Peter’s landlord reminding you that rent is overdue. Unfortunately for Peter, supervillains don’t stop to let you go pay bills. Eventually, Peter gets the call that he’s been evicted from his apartment and that all his belongings have been thrown away. You have to call the sanitation department to track what route the garbage trucks are on in order to  retrieve some of your Spider-Man tech. This sort of thing would never have happened to either Andrew Garfield’s Spider-Man nor Tom Holland’s. People who write the Web-Head often forget or omit that part of what makes Peter relatable is that he comes from a lower income household. Being Spider-Man puts a genuine strain on Peter’s life both personally and financially but he does it anyway.

Knowing that Peter’s actions as Spider-Man impact his private life puts much more weight on everything he does. Later on in the game, Spider-Man encounters a man who was also just evicted from his apartment and is now homeless. The man’s landlord let out all twelve of his pet pigeons which are now lost around New York. Spider-Man, in the midst of all the chaos of the plot, takes time out of his day to find each lost pigeon and return them home. For this Peter Parker, taking care of his city doesn’t just mean punching bad guys and saving the world. Sometimes, being a superhero is much more mundane.

In a world saturated with high production superhero films, having a side mission where you save pigeons could come across silly and unimportant. Small as this side mission might be, it reignited my love for Peter Parker as a character. It shows that great responsibility and great characterization doesn’t require you to go to space, travel across the world, or fight supervillains. This game shows that sometimes you don’t always get things right. Sometimes, balancing responsibility incorrectly comes with consequences. In the end, I think this game and these missions capture what makes Spider-Man important. He’s just a guy from Queens who’s trying his best. To me, that’s perfect.