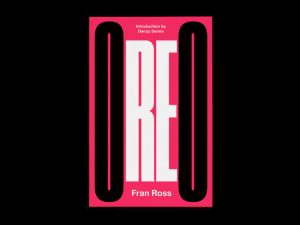 There are a handful of books I have re-read several times because I found some deep, emotional connection with the characters, and each read is like a conversation with a dear old friend. (I have a dear new friend who revisits To Kill a Mockingbird every year for similar reasons and to see how his opinions on the text change over time.)

Then there are books I have re-read because I just know that I didn’t catch everything the author was throwing down the first time. And I’m here to tell you, folks, that Fran Ross’s Oreo is the queen of those books. Oreo’s heroine’s journey to find the “secret of her birth” had me laughing aloud and wrapping my brain around awesome word puzzles the entire time.

Though originally published in 1974 (more on that later), Oreo was re-printed by New Directions in July of this 2015, and I was lucky enough to grab it right off our shelves.

Oreo is so witty, so hilarious, so sharp, that I’m pretty sure it’ll take a dozen re-reads (and a lot of Googling) for me to catch everything. Through third-person narration – peppered with footnotes, asides, bulleted lists, and occasional charts – the author jokes in a combination of Yiddish, African American Vernacular English, Français, Standard English, mathematical equations, thick southern accents, and a weird language invented by a child.

The complex style is completely appropriate for the protagonist: a smart, confident half-Jewish/half-black adolescent girl in Philadelphia named Christine, nicknamed “Oreo” (long story). As Oreo uses a bizarre list of hints from her estranged father to locate him in New York City, she encounters a ridiculous cast of characters and situations. Armed with an enviable vocabulary and her own personal brand of martial arts moves, Oreo delivers the occasional one-liner, “hed-blō,” and/or “but-kik,” as necessary.

When Oreo was published in 1974, it received very little attention and fizzled quickly. In the introduction to this release, Danzy Senna states that the book “got a few amused and somewhat confused reviews in Ms. Magazine and Esquire but apparently didn’t speak to the wider cultural landscape of the moment.”

Just two years later, Alex Haley’s novel Roots: The Saga of an American Family got extensive praise and became one of the most acclaimed novels of the decade. Both fantastic stories dealt with race, but in completely different ways. With the recent re-release, it seems Fran Ross may have simply been ahead of her time. Featuring a sharp, self-assured bi-racial character who holds her own against a variety of obstacles without ever feeling like a victim, this novel may have been too groundbreaking even for the political climate of the 1970s.  In fact, this book feels so relevant to American culture today, I had to continuously remind myself that Oreo was published a decade before I was born.

I can’t wait to re-read Oreo (although there are a few holds on the library copy, so it may be a minute). I know I’ll catch more subtle references and jokes with each time around. This book makes me feel both smart (for figuring out some things) and totally ignorant, but in a productive and motivating way. I only wish Fran Ross, who passed away in 1985, could be around to see her protagonist and writing get the recognition they deserve.