“You know what happens to nosy fellows? Huh?” asks the original water knife in the movie Chinatown, opens a new window. Roman Polanski’s California thug is pretty sharply-dressed compared to the flak-jacketed New Mexico henchman and title character in Paolo Bacigalupi’s new book about water wars in the American West; thug life has changed with the times.

Ex-gang member Angel Velazquez is plying his trade in a drought-ravaged near future as a “water knife” who keeps the genetically-engineered arcologies of the 1% thriving for Catherine Case, the unquenchable queen of the Southern Nevada Water Authority. Case is doubtlessly modeled on the ruthless Pat Mulroy, Nevada’s real-life (and self-described) Water Witch, just one of the many ties to the present that give this book an authentic feel.

Case sends Angel to Arizona, where he crosses paths with Maria, a dirt-poor immigrant (fleeing Texas, not Mexico – a nice touch) and Lucy Monroe, a prize-winning reporter known for stirring up dust. Mix in upstream monkey wrenching, downstream manipulating, barrios, evangelists, torture, lawyers, guns, and missing documents, and you’ve got a swirling dust-devil of a story, only a few decades from today’s news. 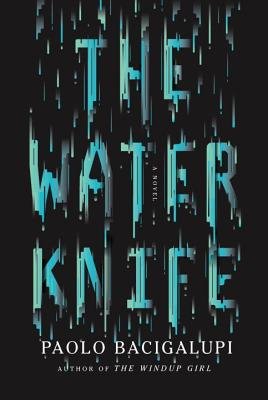 I’ve long been intrigued by the American West as a living space, to borrow Wallace Stegner's, opens a new window phrase. Back in high school, my friend Pete told me about a friend of his dad’s named Ed, and recommended a book that this guy had written called The Monkey Wrench Gang, opens a new window. I had never even been west of Ohio at the time, so I had little context in which to place Ed Abbey’s enjoyably-radical tale of ‘70s water wars, but it often popped up as I later moved in new directions. Over the years I’ve explored the territory via roadtrips and lots of books.

It could be argued that Euramerican water appropriation and distribution in the arid West is but a long story of water knives, some official and some not so much. Marc Reisner’s classic book, Cadillac Desert, opens a new window, is the go-to history (it even surfaces in The Water Knife). But there are books to read before Reisner’s to get a feel for the West, the first being Wallace Stegner’s biography of John Wesley Powell, Beyond the Hundredth Meridian., opens a new window

Powell studied the West and was the first to float the Colorado River in 1869. He went to D.C. encouraging a watershed-based perspective and insisted that the region was too dry for agriculture. Big business shut him down.

Surprisingly, famed Bureau of Reclamation director Floyd Dominy also embraced a watershed-based perspective. In Encounters with the Archdruid, John McPhee’s portrait of Dominy floating the Colorado River through the Grand Canyon with environmentalist David Brower, McPhee writes: “Dominy begins to talk dams. To him, the world is a tessellation of watersheds… He does not see nations so much as he sees rivers, and his imagination runs down rivers building dams.”

You can hear what Powell said 80 years before bouncing off the canyon walls: “I tell you, gentlemen, you are piling up a heritage of conflict.” The Water Knife, though science fiction, shows the lasting truth in Powell’s words.

Paolo Bacigalupi studied the West near the Rocky Mountain source of the Colorado River, working for a newspaper called High Country News, a great place to learn about the region. Readers of that paper learned of factors like climate change and reduced snowpack long before they were cause for concern farther downstream. As HCN’s webmaster, Bacigalupi also had a foot in the cyber world, a sure enough foot to support his many award-winning Fantasy/Science Fiction short stories and his first novel, The Wind-Up Girl, opens a new window, which won him both the prestigious Nebula and Hugo Awards. There’s now a relatively-new genre termed “cli-fi”, short for climate fiction, and with The Water Knife he’s sure to win a large cut of whatever awards cli-fiers give out.

And deservedly so. Though I read little speculative fiction, I thoroughly enjoyed The Water Knife. It will be interesting, to say the least, to see which directions cli-fi writers go as a new destiny becomes manifest.