I’m a big Bob’s Burgers, opens a new window fan. It’s a top ten show for me. I own all the seasons (and the delightful soundtrack, opens a new window to boot). We quote it (and often sing it) almost daily at my household. Heck, this isn’t even the first time I’m writing about it.

An all time great episode is the fifth season, opens a new window’s “Hawk & Chick.” The central plot involves the Belchers reconnecting an aging actor with his estranged daughter and co-star of the chanbara (“sword fighting” movies) series Hawk & Chick where they played a wandering father-daughter monster slaying samurai barber team.

It’s as wonderful as it sounds. One of many highlights in this heartwarming episode is the handful of scenes from Hawk & Chick. They’re ridiculous, and every time I see them, I can’t help but wish there were real movies behind them.

The good news is that there (kinda) are. 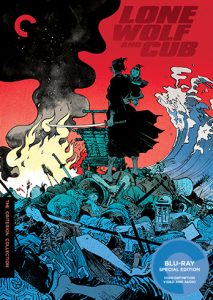 It turns out Hawk & Chick is a loving homage to the 1970’s chanbara series Lone Wolf and Cub, opens a new window, six films starring Tomisaburo Wakayama as Ogami Itto, the Lone Wolf Assassin. While there aren’t any monsters (or barbers), there’s plenty of over the top action, a ridiculously high body count, iconic hot pink jets of blood galore, and one of the weirdest, eclectic, and best soundtracks this side of Cowboy Bebop, opens a new window. It’s a thoroughly entertaining ride (despite its flaws—more on that later), and a fairly faithful (and sadly incomplete) adaptation of the epic 28 volume manga of the same name, opens a new window,penned by Kazuo Koike (who also wrote the scripts for the films) and drawn by artist Goseki Kojima.

Kozure Okami (Lone Wolf and Cub) is a revenge story set in Tokugawa-period Japan (1603-1868) that follows Ogami Itto and his son, Daigoro. After a rival clan betrays Ogami in order to obtain his post as the kōgi kaishakunin (the shogun’s executioner) he swears to not only uncover their motives, but to travel the path of meifumadō (the road to hell) exacting bloody vengeance on the way. As a rōnin assassin for hire, Ogami—young son in tow—treks across Japan eliminating his marks while inching closer to retribution. 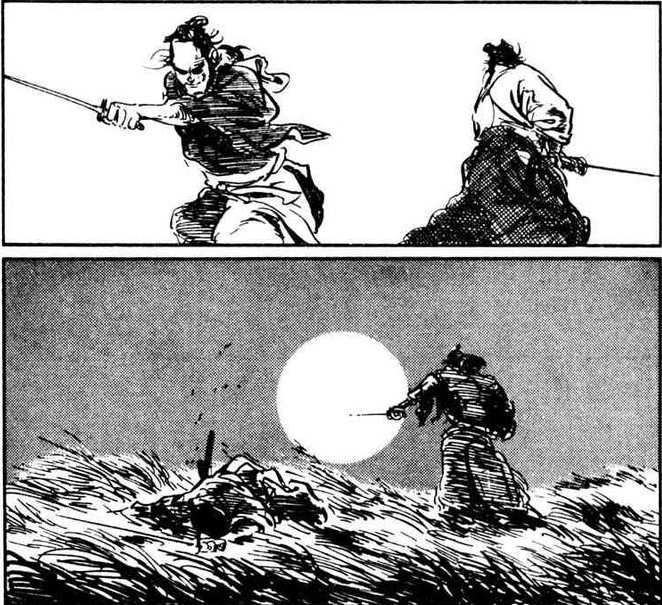 Lone Wolf and Cub’s attention to historical detail isn’t confined to the artwork. Yes, this is first and foremost a pulpy avenging samurai tale, but the vagabond nature of its protagonists allows Lone Wolf and Cub to explore myriad aspects of life in Tokugawa Japan. To supplement that interest, each volume comes equipped with a glossary defining quotidian terms, bushido ethics, and Buddhist philosophies that liberally appear throughout the work.

With spectacular art direction and a meticulously researched world, it should surprise no one that Lone Wolf and Cub is a multiple award winner in the US. It’s also a phenomenon in Japan spawning at least seven films, four plays, two TV series, a sequel, and more since its creation nearly 50 years ago. Frank Miller (Ronin, opens a new window, The Dark Knight Returns, opens a new window) cited it as an inspiration, and created cover art for the manga’s first US editions. Quentin Tarantino, another stand out admirer, alluded to Shogun Assassin (the American release of the first two Lone Wolf and Cub movies) in Kill Bill: Volume 2, opens a new window. 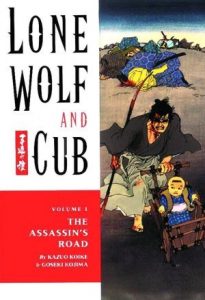 The manga—and film series—is not without its flaws, however. A consequence of Ogami Itto’s unparalleled martial prowess is that there are few moments of real tension for him. His near invulnerability is strikingly removed from the perilous scenarios that the series’ female characters constantly confront. Sexual harassment and rape may have been common in Tokugawa Japan, but in a narrative where a solitary man can best hundreds in combat and go toe to toe with the shogunate, it’s depressing, it’s gratuitous, and frankly it’s unimaginative that women can’t escape sexualized violence. Unsurprisingly, the only consolation the road to hell offers its abused women (as well as Ogami Itto) is grisly revenge.

This is not an uplifting story. As a hired killer on the run, Ogami crosses blades with men, women, friends, and old allies. It can get pretty heavy, but what else would one expect from meifumadō? The cyclical nature of violence and vengeance comes to a foregone conclusion in one last battle between Ogami Itto and his nemesis, Yagyū Retsudō. It’s a magnificent showdown, and even though it’s not nearly as sweet as a Bob’s Burgers episode, the unforgettable duel provides a tremendously satisfying ending to one of the most impressive and influential mangas out there.

-Ian Stepp is an Information Services Assistant at the Lawrence Public Library.