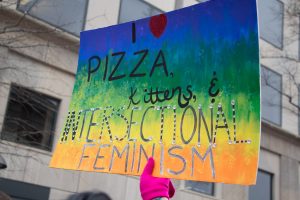 in·ter·sec·tion·al·i·ty
/ˌin(t)ərsekSHəˈnalədē/
noun
What happens when forms of discrimination combine, overlap, and intersect

Merriam-Webster marked intersectionality as a “word we’re watching” in 2017, but the term was coined thirty years ago by Kimberlé Crenshaw, law professor and social theorist.

"Intersectionality is a lens through which you can see where power comes and collides, where it interlocks and intersects. It’s not simply that there’s a race problem here, a gender problem here, and a class or LBGTQ problem there. Many times that framework erases what happens to people who are subject to all of these things."

Thinking about these big concepts can be a little overwhelming at times, and in times like these, I look to food for guidance. Luckily, Akilah Hughes is here for us with Intersectionality and Pizza:

(Found through an article by Francesca Ramsay, which includes video transcript)

When we read for information and inspiration, it’s crucial to look at the larger picture and pay attention to whose voices we’re hearing, to which pizzas we're celebrating. While shelving at the library, I’ve come across some amazing new resources that can help us make this Women’s History Month more inclusive.

-- Reclaiming Our Space by Feminista Jones: Social worker/activist Feminista Jones breaks down how black women are coming together to carve out spaces and make their voices heard, both in person and through social media platforms. She looks at the power that things like hashtags have in creating awareness and spreading information.

-- Chicana Movidas, eds. Dionne Espinoza, María Eugenia Cotera, Maylei Blackwell: This anthology brings together a wide array of activists, historians, and scholars to bring to light narratives of Chicana activism in the 1960’s and 1970’s, voices that are largely left out of Chicano movement histories.

-- An Indigenous Peoples' History of the United States by Roxanne Dunbar-Ortiz: The ultimate re-telling of U.S. history. A must-read for everyone, but especially of interest in Lawrence and other communities that celebrate Indigenous Peoples Day. (Note: audiobook available without holds on Hoopla)

-- Ask, ed. Kitty Stryker: 'Consent' is another term that has gained attention in recent years, and Ask is here to explain how this concept applies not only to sexual and romantic encounters, but to all aspects of our life.

-- All the Women in My Family Sing, ed. Deborah Santana: The number of topics and experiences covered in this collection is astounding, but all of the essays share one thing – they are all written by women of color, which is revolutionary "in a time when 80% of people who work in publishing self-identify as white" (Lee&Lo)

-- Can We All Be Feminists?, ed. June Eric-Udorie: Feminism has not taken an intersectional approach throughout its history, leaving many women uncomfortable with, or even disdainful of, the label. This anthology asks bold questions about how feminists can do better in the future for the good of all.

-- Sissy by Jacob Tobia: Dubbed a 'coming-of-gender' story, Tobia uses their hilariously bold voice to tell their own story of coming out as genderqueer and also show how the gender binary is just as harmful for people within it as those on the "outside."