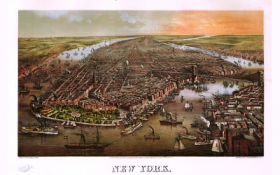 Once upon a time, I stumbled across a quiz that asked, “Where You At?” Despite, or perhaps because of, its sloppy grammar, the question has stayed with me. My interest in natural and cultural history, and even my fascination with infrastructure, surely dates to this time, as evidenced by the real estate that writers like Henry Thoreau, Wallace Stegner, and Barry Lopez occupy on my bookshelves.

About the time Barry Lopez released his short story collection Light Action in the Caribbean, I discovered another writer whose take on “where you at?” I would come to appreciate immeasurably. First through her essays, and later through her books on subjects as diverse as walking, the wars of Yosemite and Nevada, and the life of photographer Eadweard Muybridge, I grew to eagerly anticipate each new book by Rebecca Solnit.

By then, my personal geographic center had moved from east coast to west coast. Lopez, from Oregon, ranked among my favorite authors, for his understated blend of natural history and place-based stories. Those stories, while fictional, were so grounded that they were often, in effect, verbal maps.

Maps are key to his Light Action story “The Mappist,” in which the narrator discovers a series of guidebooks seemingly written by different authors but with such “depth and integration” and “distinctive layering” that he is convinced they are products of the same mind. A map he happens upon confirms his hunch, and eventually he tracks down the elusive writer – a cartographer named Corlis Benefideo. 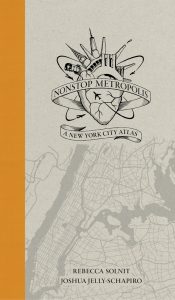 Rebecca Solnit also writes deep and integrated guidebooks of a sort, so imagine my surprise when in 2010, life imitated art, and she spearheaded a collection of maps. Entitled Infinite City, it is an atlas of her hometown of San Francisco. Collected within are twenty-two wonderful maps on different themes, drawn by different artists, each accompanied by a distinctively layered essay that is stellar in its own right.

She has since coordinated two more atlases. Not too surprisingly, the North American Cartographic Information Society has awarded Solnit their Corlis Benefideo Award for Imaginative Cartography.

Following Infinite City came Unfathomable City, New Orleans, growing out of the mudboots-on-the-ground research she did for her important book A Paradise Built in Hell. She and her tri-coastal tag-team of contributors wrapped up the trilogy with New York City, in Nonstop Metropolis, which just won the 2017 Brendan Gill prize.

I’ve never lived in those cities, but I’ve been lucky enough to have visited each at least a couple times. Unfathomable City was the most fun to explore, since I know New Orleans best. I was going to say that it comes with a virtual soundtrack – it is New Orleans, after all – but then I remembered that Nonstop Metropolis does too, described in the very first entry, “Singing the City,” and alluded to in several other maps.

Revisiting the three cities as presented in the atlases has been a real joy. From the SF start to the NYC finish, the juxtaposition of themes explored are nothing short of genius. A few favorites: Monarchs and Queens: Butterfly Habitats and Queer Public Spaces. Dharma Wheels and Fish Ladders: Salmon Migrations, Soto Zen Arrivals. Oil and Water: Extracting Petroleum, Exterminating Nature. Repercussions: Rhythm and Resistance across the Atlantic. Harpers and Harpooners: Whaling and Publishing in Melville’s Manhattan. Black Star Lines: Harlem Secular and Sacred.

The contributors are erudite and eccentric, and their essays will blow your mind, especially once you consider the research involved in each (seventy total for the three atlases). The accompanying maps display similarly inspired artwork and cartography. The overall feel of the books (especially the street map impressed hardcovers) is lovely. Additional sketches and photos are sprinkled throughout. Even the introductions are meaty and inspiring.

The approach to mapping that Ms. Solnit has taken is of course the opposite of Corlis Benefideo’s solo efforts. Infinite City lists her as its sole author (though others helped with the essays), Rebecca Snedeker co-edited Unfathomable City, and Joshua Jelly-Shapiro co-edited Nonstop Metropolis. All three atlases draw on a huge roster of artistic and writerly collaborators, and continuity is provided by a handful who worked on more than one.

All in all, the infinite, unfathomable, nonstop atlases please and inform on every level. Except, intentionally, one: there’s no app. You can’t discover “Where You At?” staring at a little screen. Corlis Benefideo could have been speaking of Rebecca Solnit’s expansive atlases when he said, “These maps reveal the foundations beneath the ephemera.”