This October, the anime Yuri On Ice!!!, made its debut and has since taken the internet by storm. It begins with “a dime-a-dozen Japanese figure skater,” Katsuki Yuri, who struggles with  anxiety and self-confidence issues. Following a defeat at the Grand Prix Final and the eventual loss of his coach, he returns to his hometown of Hasetsu in Kyushu, Japan. Shortly thereafter, Yuri’s figure skating idol Viktor Nikiforov appears in Hasetsu to take Yuri on as his student.

One of the immediate appeal factors of Yuri On Ice!!!, without a doubt, is Yuri’s relatability as a person, such as with his family and his friends. Another factor is the realness and quality of the writing. To be honest, I have not been this entranced by a television show in some time; since they’ve wrapped their first season, here are some titles that share similar qualities to that of the history-making Yuri On Ice!!!

Check Please!, a webcomic that has a following in its own right and is as unique as Yuri On Ice!!!, is certainly worth mentioning for its genius relating to sports anime. The narrative begins with Eric “Bitty” Bittle, who hails from Georgia and is a freshman at Samwell University in Massachusetts. Bittle, a video blogger, baker, and a former figure skating champion, wins a scholarship, as well as a place on the school’s ice hockey team. Having a new town, a new sport, and new teammates brings inner turmoil as he wrestles with his own sexuality after developing a crush on Jack, the team captain.

Days is an anime, as well as a manga, that concerns a young man, Tsukushi Tsukamoto, a freshman at Seiseki High School. Here, he joins the school soccer team despite being a complete novice. Tsukamoto deals with shyness stemming from repeated bullying, yet is still polite and extremely honest with his feelings, sometimes to the point of overreacting. To compensate for having a low skill set when it comes to soccer, Tsukamoto tries to maintain the role of peacemaker between his teachers and classmates.

Prince of Stride: Alternative involves a team comprised of six players in a sport called Stride: a combination of freerunning, city marathon, parkour, and relay. This anime begins with two freshmen, Takeru Fujiwara and Nana Sakurai, as they recruit members for their Stride team. Their collective objective is to win the ultimate competition known as the “End of Summer” that showcases only the best school teams in Japan.

Haikyū!!, similar to Days, is an anime as well as a manga. It’s safe to say that the premise does not involve an extreme poetry competition; rather, this “haikyū” is literally Japanese for volleyball. Shōyō Hinata, who, after viewing a match on television, sets his sights on becoming the next “Small Giant” by joining his junior high volleyball team. Hinata and his teammates battle their way through tournament after tournament, occasionally crossing paths with rival Tobio Kageyama, aka, “King of the Upper Court.” If entering high school wasn’t stressful enough, Kageyama not only ends up Hinata’s classmate, but he becomes his teammate upon graduation. 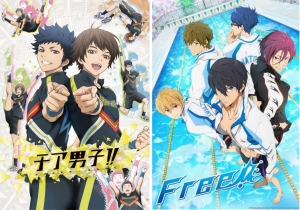 Cheer Boys!!, also known as Cheer Danshi!!, is an anime based on the novel of the same name by Ryō Asai and debuted this year in manga form. Cheer’s main protagonist Haruki Bandou is a shy former Judo martial artist. He creates Breakers, a men’s university cheerleading team when invited by his childhood friend, Kazuma Hashimoto. Cheer Boys!! follows their trials and tribulations as they create an unprecedented squad while breaking the cultural norms of college athletics.

Free!, based on High Speed! by Kōji Ōji, is an account of lifelong friends: Haruka, Makoto, Nagisa, and Rin. Since growing up in Iwatobi and swim training together, these friends had since parted ways, only to reconnect again in high school via the sport that brought them together. Now reunited, they strive to recreate the swim club of their youth using their school’s derelict outdoor pool. The situation suffers a backstroke of bad luck when teammate Rin breaks away only to become their toughest competitor.