Brother in Ice is a recently-translated novel by Catalan writer and artist Alicia Kopf; at once, it is also decidedly not a novel. To appreciate the apparently quantum state of the book, we’ll need to start to thinking about ice.

It’s cold and solid, but used to be (and might again be) a totally different form in water or vapor. We encounter it, typically, in small amounts, but we recall that there are worlds of ice bookending the globe. Kopf has spent much of her adult life analyzing these facets and countless more, searching for inlets to meaning—the concept of ice functions as her organizing principle.

All the insights she’s drawn out coalesce into Brother in Ice, a narrative layered with the authors honest memoir, imaginative storytelling, and, of course, plenty of research notes on the properties of ice and the history of polar exploration. Reading it as a novel feels natural, yet the individual textual elements at hand resist that form.

Kopf recounts her family history, arranged around—but not necessarily directly focused on—her autistic adult brother, to which the book title and central metaphor refer. His everyday experience is a kind of stasis:

The doctor told us about a problem with the neurotransmitters that make him unable to hug us or ask how we are. It means it takes him at least half an hour to tie his shoes. It means that he might stop in the middle of closing a door. (He) stutters, as if there were also snow between one syllable and another.

For Kopf, this evokes sympathy and affection, as well as a frustration with her own stasis. She confronts career, family, and romance struggles that keep her feelings turning back to the 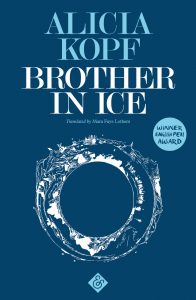 It becomes clear: for her, applying the metaphor to her life fosters understanding, but there is also a separate significance to be gained in the idea of ice itself, left unapplied to a figurative target. Of course, the line between these two concerns blurs at times as she finds herself reflecting more and more about ice and her own life, separately or in concert.

With the eye of an artist, Kopf comments especially on the early photo documentation of these voyages, adding yet another layer of media to the book; the grainy, black and white photos, with their devoid backgrounds and weary subjects, really do underscore Kopf’s reflections on social uncertainty.

She struggles with a tenuous relationship with her mother—who must still care for her adult brother full time—as well as dating an elusive on-again off-again boyfriend. Perhaps, she wonders, she grew up too fast the first time, preemptively settling into a routine of just-scraping-by independence, in both emotional and economic senses. Her own quest, mirroring that of the ice explorers, centers on a kind of second coming of age. At the pole lies a promise of something mythical and transformative.

In its final section, the book morphs once again, becoming a travelogue as Kopf actually takes a trip to Iceland to investigate her own “inner geology.” As mercurial as Brother in Ice’s genre at any given point can be, this powerful conclusion argues for its status as a novel. As the author steps into a lava cave barely inside the Arctic Circle, there is a complete trajectory of thought traced from the opening pages.

Her story alone is an intriguing, vulnerable account worth reading. The greater structure of this work then challenges us to consider the power of metaphor and how we interpret the elements surrounding us—both natural and personal. A metaphor expanded to the macro scale of a life, such as with Kopf’s connection to ice, can be both distancing and penetrating.

Brother in Ice is simultaneously an unconventional yet effective novel, a cross-genre diary and research melange, a book about ice, as well as a book about Alicia Kopf and her brother. No matter which phase it may take when it’s in your hands, it is an original undertaking that demands consideration.