What a strange thing it is to be an American today. Sometimes we may feel as if we are literally dodging bullets while simultaneously posting fake jubilance to social media, attempting to appear happier than we really are. Yesterday, I shared to facebook a think-piece on North Korea and then about two hours later, a filtered picture of my cats (who are adorable, by the way, but just needed that extra pizzazz the Nashville filter brings). Guess which one got more comments.

It is no wonder this environment can leave us feeling frazzled (and only frazzled, if we are lucky) and looking for solace and escapism. The news is chock-full of tragedy– terrorism, wars, Nazis– Actual Nazis have taken over the news cycle.

People are always yelling at other people not to be distracted. The idea of caring about too many things is worrisome to a lot of folks.THIS IS JUST A DISTRACTION. We are always warned of distractions in all caps.

The logical reaction to all of this is to log off of social media. But, what are we supposed to do if we’re not mindlessly scrolling through our ex-of-20-years-ago’s vacation pics? I mean, how is he affording that boat, anyway? Some will turn to books, of course. For others, films or unhealthy vices. Maybe you’re the kind of person who hits the gym and works it out. I always try to be a gym person but, in reality, I’m more of a wine person. What I’ve come to realize lately, though, is that when it comes to tumultuous times, what I’m not is a book person.

But what I am is an empath and when the future seems grim, I can barely concentrate on printed words. So, what is there to do at night when books are daunting and you don’t want make the trek to the liquor store? For me, the answer is to watch TV.

TV gets a bad rap for being a veritable wasteland devoid of intellect and unworthy of meaningful discourse… Well, thank God for that! I don’t know what I would have done these past few months if I hadn’t had the opportunity to sit, slack-jawed, in front of that gorgeous, flickering light while Richard Hatch swam, fished, and manipulated his way into the title of First Survivor Winner. (Yes, I just watched Survivor for the first time this summer. Only 33 seasons to go!)

And how about those people on Cutthroat Kitchen who, after Alton Brown hands them the $10,000 in cash they could potentially win, (which at least half of them sniff resulting in my daughter and myself always yelling, “Another money sniffer!”), they have to cook a Thanksgiving dinner in that tiny, cast-iron pan?! I live for this brainless entertainment. 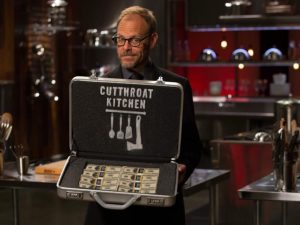 When I want something a bit more intellectually stimulating than “reality” television (but without diving completely into “prestige shows” like Game of Thrones, The Handmaid’s Tale, or House of Cards), I’ll turn to some of my favorites from the past several years and some I’ve only just discovered, like the USA version of The Office. Up until recently, I was a UK purist when it came to The Office. But, I decided to give the American version another try. Steve Carrell’s Michael Scott is an easier-to-take (although still cringe-worthy) boss than Ricky Gervais’s David Brent. Brent will always have a special place in my heart (and, of course, Michael Scott would cease to exist without him), but he puts me on edge, which is the opposite of what we’re trying to do here.

Similar in style and humor to The Office is, of course, Parks and Recreation. Leslie Knope can bring joy into the hearts of everyone who encounters her, but my favorite characters are those she surrounds herself with. Just as The Office could not thrive without Pam, Jim, and Dwight, Parks and Recreation would not be the same if it weren’t for the supporting cast. I mean, do you want to live in a world without Ron Swanson? Me neither. 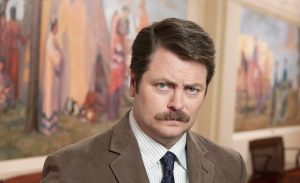 By now, you may be asking yourself if I’m familiar with any television shows that have been released in the past decade and the answer is yes! Straight out of Parks and Recreation fame came Aziz Ansari in what will surely be deemed one of the best shows to hit our screens in modern times, Master of None. What is it about this show that is so special? For one, contrary to what shows like Seinfeld, Sex and the City, Friends, and a multitude of other shows set in New York will have you believe, NYC is not made up of 8,000,000 rich, straight, white people.

This is not the point of the show but it doesn’t need to be to get the point across. The writing is sharp and maintains a wonderful balance between hilarity and poignancy. Season 2, Episode 6 entitled, “New York, I Love You,” has spawned a hundred articles written about its brilliance and deservedly so.

You’re no doubt hearing people tout the importance of “self care” these days. It’s a relevant message for those of us who have the privilege of taking some time to ourselves. I would imagine that for some, my suggestion of turning off your brain and reveling in the day-to-day activities of Dwight Schrute’s beet farm is not exactly what they had in mind. But, I’m here to tell you that since it’s your self you’re taking care of, you can do it however you please. Maybe tomorrow will be the day you crack open Tolstoy’s War and Peace. But, as for me for me, tonight? I’ll be basking in the glow of that dim television light.