“There is no success like failure, and failure is no success at all.” So sayeth Bob Dylan. What does it mean? Who knows?  But it does cause me to reflect on how subjective the concepts of success and failure are – especially when it comes to art.  And, to be honest, sometimes there is nothing more gratifying then a total cinematic train wreck.

But what about those projects that fall apart before they even come to fruition? I, for one, have always enjoyed stories of massive failures, abandoned projects, and total meltdowns. I know I’m not the only one as evidenced by a few recent books that have crossed my path like the mock Biographical Dictionary of Literary Failure and  The Greatest Albums You’ll Never Hear. But the one that truly caught my attention was The Greatest Films You’ll Never See, which compiles tales of unfinished films. It seems that from as far back as Chaplin until the present day, every single director will end their career with at least one film that broke their heart.

By far the most fascinating entry, as well as the subject of the captivating documentary – Jodorowsky’s Dune, is the story of the little known Chilean director Alejandro Jodorowsky and his 1974 effort to adapt Frank Hubert’s Sci-Fi epic Dune.  Known for his insanely psychedelic films which contain, still to this day, some of the most bizarre images ever put to film; Jodorowsky saw himself as more than just a film director, but something akin to a shamanistic spiritual guru. With his acute sense of intuition, and some assistance from cosmic chance, Jodorowsky embarked on a country-hopping spree gathering collaborators, whom he likened to “spiritual warriors”, to create what was to be the greatest film of all time. 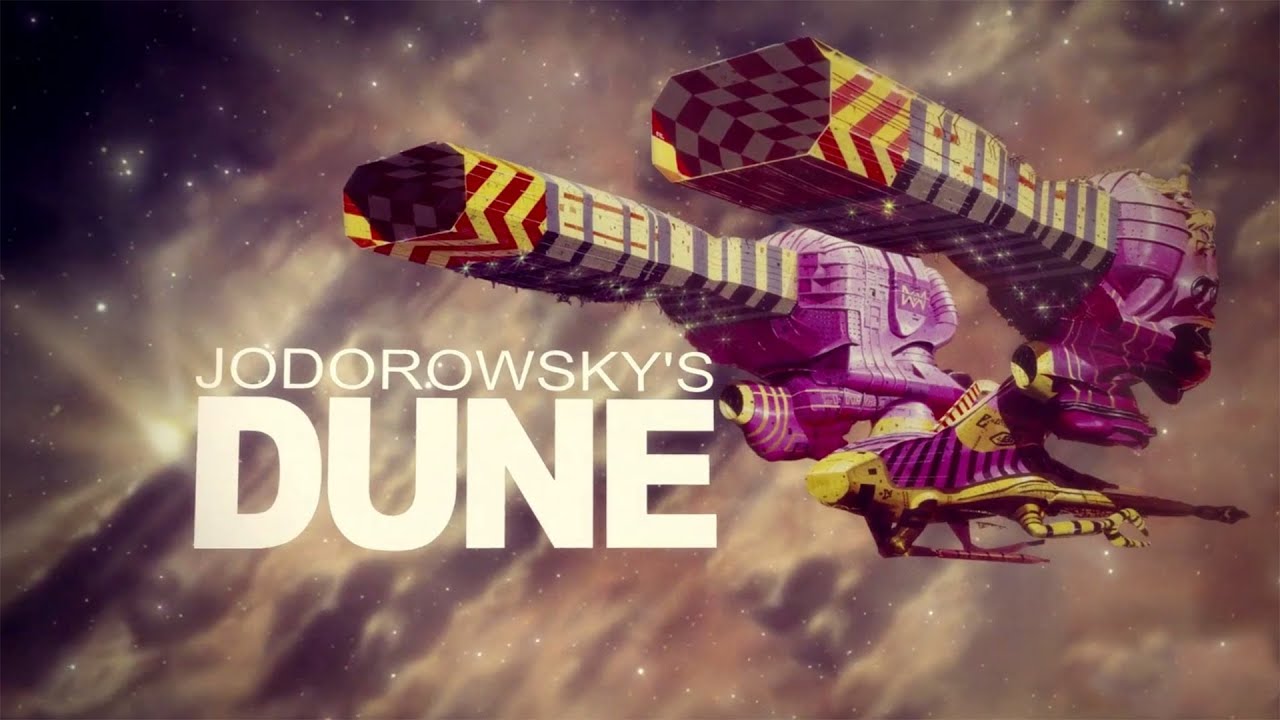 By the time he was done he had assembled a next level team of artists and designers, including future icons H.R. Giger and Moebius, and an all-star cast featuring David Carradine, Mick Jagger, Udo Kier, Pink Floyd and greatest of all – Orson Welles (with the promise of a personal gourmet chef), and Salvador Dali (with the promise to be the highest paid actor (per minute) ever. Also, adding to the religious fervor, Jodorowsky sacrificed his own twelve-year old son, casting him in a central role that required him to undergo daily martial arts training six hours a day for two years! After two and half years of development, and the creation of a gigantic book filled with detailed storyboarded images and elaborate costume sketches, everything had fallen into place.  Now all they need was a studio to cough up some more dough. And, of course, this is where it all fell apart.

Jodorowsky would fade back into obscurity and Dune would eventually be adapted by David Lynch in what is considered to be his worst film.  Remarkably, for the rest of the creative team, the years of sacrifice and hard work would not be a total waste. Connections were made, and ideas were generated, that would help lead to the outstanding success of Alien. And, as many experts love to point out, just about every sci-fi film that came in its wake owes their existence to the work they did.

It seems likely that there is a lot of hyperbole going into the creation of the Jodorowsky Dune myth, but I don’t really care about that. What I do care about is that this story of failure actually turns out to be incredibly inspiring.  Jodorowsky, now a very youthful 86 years old, seems not to look at the experience as a failure, but as a defining experience that shaped his, and his “spiritual warriors” lives. My big takeaway is that one should disregard concepts like success and failure, and fear mediocrity instead. Perhaps, as Jodorowsky’s attitude illustrates, the proverb stating that “hard work is its own reward” might actually be true.