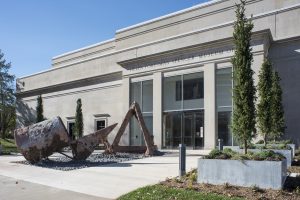 The Spencer Museum of Art recently underwent a transformative renovation that lasted eighteen months and celebrated with a grand re-opening weekend in October. This reinvigoration was more than cosmetic; it was necessary. The museum upgraded nearly 30,000 square feet —further details can be found on their website.

After dedicating great energy to time and space, the Spencer is prepared for their new exhibition, Temporal Turn: Art & Speculation in Contemporary Asia. The museum offers an eloquent summary: “Temporal Turn explores a rich mosaic of ideas about time and history from a generation of contemporary artists grounded in what has been dubbed the ‘Asian Century.’” It incorporates an impressive cohesion of works of 26 different artists from Asia, four of whom were in residence at the Spencer: Rohini Devasher (India), Jaeyoung Park (South Korea), Sahej Rahal (India), and Tomoko Konoike (Japan).

There are five themes to the exhibit—Pulse, The Edge of Infinity, Mythopoeia, Human/Posthuman/Inhuman, and Anthropocene—that unify this collective effort and its multiple literary references. The Spencer’s expansive catalog for Temporal Turn also contains two contributions from KU: short story “The Empress Jingū Fishes” by Kij Johnson, Assistant Professor of Fiction Writing, along with the piece “Time, Space, and Physics” by Philip Baringer, Professor, Department of Physics and Astronomy.

Not only do these works deal with ideas and concepts associated with time, but some interact on a physical and temporal level. Visitors are greeted by Temporal Turn with a site specific work outside the museum by Sahej Rahal, Children of Days, inspired by Eduardo Galeano’s book of the same name. The installation is a large scale amalgam consisting of rummaged material found in Lawrence, ranging from church pews to chicken wire.

Rahal, an unashamed science fiction enthusiast, transfigures these everyday objects into something altogether dystopian. Through the application of clay mixed with iron oxide, their new collective meaning evokes possible “ruins from the Future,” potential “forgotten war memorials,” or the fallen “pieces from the Death Star” found in George Lucas’ Star Wars saga, the artist notes. 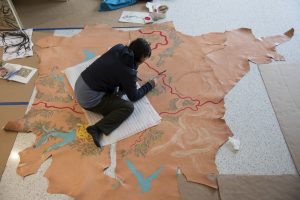 Inside the Spencer’s Central Court is another locally generated installation by Tomoko Konoike: Mythological Map of Kansas, a geographical reinterpretation of Lawrence and Kansas City. A cowhide is painted with subtle reference to a buffalo head and is held together by vibrant red leather stitchings that mirror the roadway system. Snakes of varied sizes represent the respective metropolises, and the singular eye of the buffalo houses a tornado.

Konoike’s works maintain an aesthetic that evokes imagery found in folklore and fairytale, such as Grimm’s Little Red Riding Hood, and Princess Monoke, in particular. This can be seen in the mirrored, multipede wolf in Donning Animal Skins and Braided Grass and the narrative within the video-projection piece mimio-Odyssey. While maintaining this imagery, there is a visceral resonance of the five senses through the materials she uses. This felt all but confirmed when at a recent artists’ talk, Konoike stated, “When we acquired language, we became human.”

Hur Unkyung’s work is influenced by environmental issues—specifically, by the use of GMOs in food, which is of great concern in Korea, where she lives. This knowledge combines with the imagery of creatures found in H.G. Wells’ War of the Worlds, Ridley Scott’s Alien, even Steven Spielberg’s E.T.in Unkyung’s Unknown Creatures; intriguing at first, it takes on an insidious undertone. Her use of gilding alters the perception of unidentifiable forms because, she says,  “beautifulness embraced ugliness” and because it makes them appear “precious,” as well as captivating. 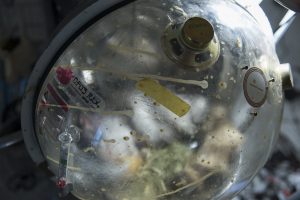 Jaeyoung Park’s contribution to Temporal Turn, the Kansas Bokaisen Project installation, is a laboratory shrouded in supernatural mystique. Movies and novels that continue a narrative of urban legends, real or imagined, are the inspirational source material behind his process. Here, Park resurrects an urban legend from 1500’s Japan, a creature known as Bokaisen. He encourages museum visitors to incorporate the mythological creature into the present zeitgeist through modern technology, via Instagram or handmade posters displayed around town.