I have a new mantra. Here it is: Welcome to your old age, Randi. Okay. So it’s more of a mantra phrase, but still, it’s the repetition that gives a mantra its calming mojo. I use it whenever I feel a twinge where I’ve not twinged before, whenever an injury doesn’t heal quite as quickly or neatly as it used to, and whenever there’s some change in my overall sense of myself—of the me I have grown used to over the years.

Naturally this line of thought makes me think of books, specifically books that deal with aging. Not one of those books on how to age (as if we needed instructions), or how to fight aging (as if it were a battle), or how it’s the best time of your life (it’s not). I mean novels about aging.

The queen, in my opinion, of writing novels about aging is Anne Tyler. She writes about us with sweetness and quiet humor and familiarity (she’s 74 herself). She reveals with love the failures and fears that accompany getting older at the same time that she reveals the concomitant freedom and wisdom that can also follow. There’s no pity in her portrayals of humans grappling with the recognition of the inevitable, by which I mean, of course, death.

Her stories are about aging people realizing something about their lives and dealing, in their own idiosyncratic ways, with the effects this revelation has on themselves and their families. The revelations aren’t necessarily

thunderous—no voice on high suddenly reveals a universal truth or the existence of a heaven—they’re more about the way memories suddenly permeate the present, about a surprising perspective on the way things turned out and the way they didn’t, about the way our perception of what it means to be an adult changes as we age. Not thunderous, no, but nonetheless potent.

My favorite of Anne Tyler’s books about aging people is Back When We Were Grownups (2001) whose maincharacter, Rebecca Davitch, is dealing with the reality of being in her fifties and having become, as she laments, “the wrong person,” a thought, I imagine, that has hit all of us upside the head at some point.

Tyler tells Rebecca’s story in gentle prose and with gentle humor. The writing is lyric, and the character population is human, and Rebecca is endearingly flustered as she attempts to go back to resurrect and follow the path that she believes would have led her to become the “right” person, the person she believes was meant to be.

Additionally, Tyler’s novel A Spool of Blue Thread (2015) is quite simply a perfect book. It’s perfect. 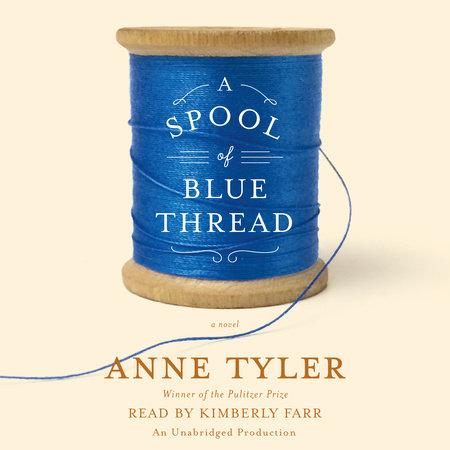 The main characters are in their 70s, dealing with aging, with children who are less than perfect and still needy, with the stories we tell ourselves about our lives, and with the loss of self and the touch of dementia. The Whitshanks are a charming, flawed family, and Tyler acquaints us with them in words that are realistic but not dramatic, hard-hitting but not injurious and always affectionately humorous.

And so, if you are facing your own graying (or the graying of someone you love), may I suggest turning to Anne Tyler for a perspective adjustment? Her grace and her honesty can shepherd us all to a place where we can say with at least a wry curl of the lip and a knowing shake of the head, “Welcome to your old age, YOUR NAME HERE.”