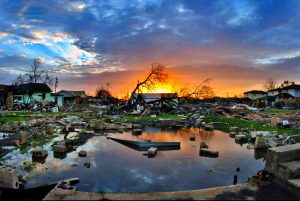 Esch lives in Bois Sauvage, a dilapidated town on the Mississippi bayou, and she’s the powerful protagonist in Jesmyn Ward’s novel, Salvage the Bones.

Esch’s mama is dead, and she lives with her drunken daddy and three brothers who are each trying to figure out how to be men without having role models. Though her brothers love her fiercely, Esch gets most of her attention and physical connection by offering her body to her brothers’ friends on the dark, marshy earth. Her only other solace is in the world of Greek mythology, whose women act as her compass: 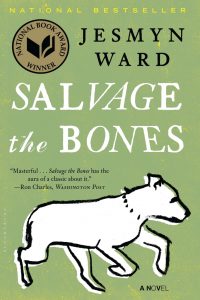 [T]he trickster nymphs, the ruthless goddesses, the world-uprooting mothers. Io, who made a god’s heart hot with love; Artemis, who turned a man into a deer and had her dogs tear him cartilage from bone; Demeter, who made time stop when her daughter was stolen.

These goddesses become her mama, and she looks to them as she navigates unrequited love and mounting confusion over the treacherous world both in and outside of her body.  In her head, Esch is Medea. Her love, her Jason, put a baby in her but doesn’t want it, and she’s learning how to exist while staring down a storm.

Salvage the Bones takes place over the twelve days leading up to and just after Katrina hit. It intensely combines poetic phrasing and visceral imagery to deliver punch after gut punch. I came to Esch’s story this summer, four years after its publication, and could not put it down. Jesmyn Ward transported me into the eye of the storm and the depth of the flood, much like Zora Neale Hurston’s Their Eyes Were Watching God. 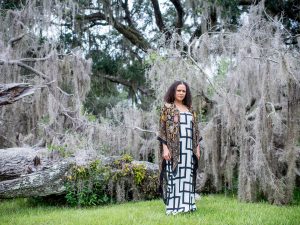 Ward lived through the hurricane herself, a storm that “had unmade the world, tree by water by house by person.” She wrote Esch’s story to provide a much-needed narrative, as very little fiction has been written about Katrina despite the  devastation it wrought.

Ward had been – and likely still is – “dissatisfied with the way [Hurricane Katrina] had receded from public consciousness.” Salvage the Bones won the 2011 National Book Award for fiction and still sits as one of the very few fictional accounts of Katrina. In 2010, New Orleans native Josh Levin stated: “Five years later, Katrina’s legacy seems less tangible than I’d imagined it would be,” and perhaps the lack of representation in fiction could be partially to blame.

But why is there such a scarcity, especially compared to other American tragedies? Is it because natural disasters are less “glamorous” and politically charged than, say, a terrorist attack? Or because many of the victims in Katrina were poor people of color, who are often overlooked in fiction altogether? Or is there another explanation altogether? Regardless of the reason(s), in the now ten years since Katrina hit, some of us are forgetting, and authors like Jesmyn Ward and characters like Esch are crucial in preventing that from happening.

Beneath A Meth Moon

Another Kind of Hurricane