With 2018 winding to a close, librarians and book lovers everywhere are reflecting on another joyful year of reading. The curated best of lists are rolling out or are in the works — stay tuned! — and readers get to think back on the titles that will stick with them for many more seasons to come.

It’s never too early, though, to start looking ahead. Even with holidays and hindsight catching all the attention, the inexorable spring of new book hype keeps flowing. The slate of upcoming 2019 reads is already looking quite robust. To give you a head start on your 2019 to-be-read list, here’s a forecast of some of the most intriguing science fiction hits in the making — because, at the turn of the year, what could be more apt than focusing on the genre with the untold potential of the future?

March 2019: ONCE & FUTURE by Amy Rose Capetta and Cori McCarthy

Things are kicking off in March with a doozy: a genderbent, space opera entry into the Arthurian Legend. Once & Future isn’t exactly a retelling; it can function as a proper sequel, set in a distant future. The book follows Ari Helix, an intergalactic immigrant fleeing a cutthroat corporation. She crash lands on “Old Earth” and finds the mythical sword Excalibur, soon meeting none other than Merlin himself.

With her status as the reincarnation of King Arthur established, you can imagine what happens next… or can you? This epic young adult adventure will stand on its own merits thanks to the wildly creative imagination of its authors. 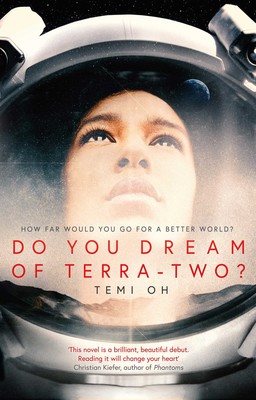 With a decidedly Philip K. Dick-esque title, Temi Oh’s Do You Dream of Terra-Two? immediately catches the eye. The premise also draws on classic science fiction stock — a dying Earth must send a crew of astronauts on the way to a relatively-nearby habitable planet, a new home for humanity. The team consists of four veteran astronauts and six teenagers who have been training most of their life for this mission.

They’ll have to spend 23 years together on their journey, which sounds like a recipe for strife even without the constant perils of space travel. Though it may seem like familiar ground, this sort of story has never been told by a writer like Temi Oh, a neuroscientist-turned-creative writer with a blazing intellect. This is her debut novel, and I can’t wait.

June 2019: The Lesson by Cadwell Turnbull

The Lesson emerges as a powerful story that expands the domain of science fiction as we know it. It’s the first book in the genre ever set in the U.S. Virgin Islands, which may sound trivial at first; however, this choice is key to author Cadwell Turnbull’s discussion of colonialism and its legacy. The territory has becomes the site of first contact when a ship of Ynaa — a superadvanced alien race — lands there to begin a mysterious project.

The Ynaa are typically benevolent, but subject the people of the Virgin Islands to moments of disproportionate wrath when challenged. Five years after contact, the tension has reached the point of no return for these groups. Turnbull deftly renders an original, page turning sci fi tale while speaking volumes on the ramifications of colonialism.

July 2019: This is How You Lose the Time War by Amal El-Mohtar and Max Gladstone

Of course, the book I’m easily the most excited for will arrive last of the bunch, nearly seven months deep into the future. This is How You Lose the Time War is special in many ways. It’s a collaborative mash up of two award-winning writers on the rise, a veritable SF super duo. Amal El-Mohtar and Max Gladstone tell the story of two time-travelling factions, each hellbent on finding a way to survive in a depleted world.

When a soldier finds a letter on the battlefield from a counterpart on the other side, the two begin a tenuous correspondence as the time war rages around them. Their bond grows, becoming a force to be reckoned in its own right, and their love might just change the world. Don’t miss this incredibly unique sci fi romance — you might be seeing it a year from now on the best of 2019 book lists.