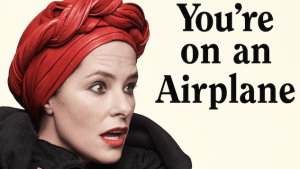 Well, it's happened—I've turned into one of those people who talks fondly of their formative years through the rose-colored tint of vintage sunglasses popular in the 90s. I never wanted this to happen. The plan was to change with the times and never grow old. Obviously. I suppose a lot of us approaching, or in the throes of, middle-age are feeling this way, and independent film star Parker Posey's new memoir, You're on an Airplane, shows she's no different from the rest of us (at least as far as nostalgia is concerned).

Posey became a sort-of hero of mine in 1995. I was 19 years old and working at the Johnson County Library. My life revolved around my ever-growing vintage clothing collection, becoming an actress and / or a Lawrence, Kansas socialite, and working just enough to finance the aforementioned hobbies. My family seemed confused by my inability to keep up my grades, but what they didn't understand was that there were, like, a lot of parties to go to. Something had to give, and that something was Algebra. Anyway, that year when the movie Party Girl came out it was like LOOKING IN A MIRROR. Parker Posey as library clerk by day and, ya know, party girl by night was my LIFE. Except my life wasn't happening in New York City—that wouldn't occur for another decade—but the basics were there. It is truly bizarre when something captures what you think is your own unique essence and a movie is made of it.

You're on an Airplane, Posey's "self mythologizing memoir," begins as if she were sitting on a plane talking to a stranger about her family, her dog, her career... all the while interrupting her own story to ask the flight attendant for tea or coffee. It's quirky, as she is.  It is also probably my least favorite aspect of the book. Fortunately, she relies on this device less and less as the stories move on, and we get into the real reasons we are here... To have our questions answered! What on earth could her family be like? Did she wear her own clothes in her films? How much of Waiting for Guffman was improvised? She answers these questions and so many more with stories that feel like hanging out with an old friend.

As an aspiring actor, I was in love with Posey's career. The Christopher Guest-directed movies she stars in are still some of my favorites, and they are the types of films I would have given anything to be a part of. Actors watch films differently than non-actors. We are looking at beats taken between dialogue, actor choices vs director choices, what's improvised and what's scripted... Sometimes we aren't fun to be around in a movie theater. Posey is a delightful actor to watch; I saw an interview with Christopher Guest once where he said she acts "in her own time zone." I love that description. I instantly knew what he meant.

For those unfamiliar with Guffman (my favorite Guest movie), Christopher Guest plays theater director Corky St. Clair who casts several local actors from Blaine, Missouri to star in his opus, Red, White, and Blaine.They are earnest in their efforts and truly believe they have a chance to make it to Broadway; they don't, of course. They're terrible (but oh-so lovable). Parker speaks of Guffman with fondness in her book and says that at the end of filming, she cried because she knew she would never get to see Corky St. Clair again.

As enjoyable as the chapters regarding her career are, Posey doesn't only keep her focus there in You're on an Airplane. She also relays wonderful (and wonderfully-bizarre) stories of her family, her beloved dog Gracie, and her mishaps as an "Ayurvedic, Wind, Vata dominant" personality. She also throws a few recipes in there for good measure.

There are a couple of chapters in the book that were hard for me to get through (and surprisingly, I'm not speaking of the chapters about Louis C.K. or Woody Allen). Posey is a hardcore yogi and spends an entire chapter describing her practice and poses. I love doing yoga, too, but to me it was similar to when someone goes into detail about their dreams: It's really only meaningful to the person describing it. My eyes start glazing over. And, speaking of glaze—she also includes a chapter about making pottery that put me in the same state.

In the end, though, You're on an Airplane is a fun read. I loved the (slight) dishing she does about celebrities, and there's a great chapter where she describes filming Dazed and Confused and how when Matthew McConaughey showed up on set every woman in the cast was... well... dazed and confused by his veritable good looks and "cool guy" attitude. (Parker recalls running to the director of the film and begging to be put in a scene with McConaughey immediately.) Posey seems timeless but also simultaneously in a time warp. She channels a wise, old-Hollywood sage while at the same time, she laments her scatter-brained tendencies.  She is just what I expected her to be and yet, she is completely unexpected—the perfect combination for an actor and writer.

You're on An Airplane