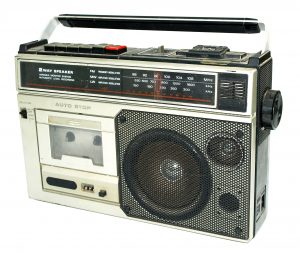 For those of us who straddle both pre- and post-internet realms, it can sometimes feel overwhelming to make the simple choice of what to listen to when you're faced with so many options. Streaming services foist "if you like ___, you'll like ___" algorithms into your listening spaces, not to mention ads. To figure out what your friends are into, you only have to hit the follow button rather than seek out a time-consuming conversation.

The risk with streaming services is that your choices aren't wholly intentional. And music is so intrinsic to each of our identities. Do we really want that identity molded even a little bit by an AI bot plotting world domination in a cold server storage warehouse somewhere, utilizing reams of code authored with data collected on Spotify user behavior? Not me! (Well, not all the time, anyway, except the part about AI world domination; then the answer is an emphatic "NOOOooooooo.")

And when you click a button rather than hit up a friend for a conversation, you're going to miss out on stories that go along with music suggestions. Case in point, a recent music discussion with a longtime friend of mine, Josh:

I'm technically a digital immigrant (pdf) who, rather than bemoaning the prevalence of technology, daily whispers sweet nothings to the magical elves toiling away on my behalf in my computer. I love technology with a fervent passion, especially because it makes my job and life in general more exciting and gives me boundless opportunities for creativity. Even though I work in a highly information-rich environment, I google all the things and get all the answers in .45 seconds rather than run up and downstairs to google the physical info housed in the library's stacks. That would be weird.

How to make a New Album Pilgrimage

So, if all these factors were present, I got the CD and took it home, gnawed my way through the difficult shrink wrap packaging, listened to it once, twice, a billion times, till its lyrics were lines in the play that was my life, its liner notes worn as my thrifted Chuck Taylors, and its melodies a part of my genetic makeup.

Music spoke for me. It told others who I was. In the pre-internet age, what you listened to was a choice stemming from attentive cultivation of taste. You had to be intentional about music. You had to work for it, and there was a sweet reward at the end, far sweeter because of the sweat you put into it. <-- OMG I think I just said that hard work is rewarding. I'm basically my father now.

-Leah Sewell is a Marketing Assistant at Lawrence Public Library.