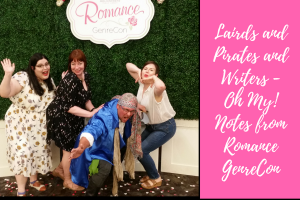 I've talked extensively about my love for the romance genre here on the blog, so it should surprise no one that my reaction to finding out that Kansas City was playing host to a romance convention in early August was basically, "OH MY GOD I HAVE TO ATTEND THIS NO MATTER WHAT IT TAKES."

Thus it was with tremendous glee that I walked through the doors of the Mid-Continent Public Library the weekend of August 3-4 with fellow Book Squad-ers Polli and Kimberly to attend the first annual Romance GenreCon. Over two glorious days, we: attended panels with featured authors talking about their experiences writing romance across subgenres including historical, paranormal, and inspirational; learned about the ways the romance market has shifted in the age of e-readers and indie publishing; listened as authors like Victoria Alexander and Pat Simmons read aloud from their published and in-progress books; watched live demonstrations of how to dress like a Victorian lady (so many layers!); played romance trivia games; met local romance authors; and got lots of recommendations for lots of books. 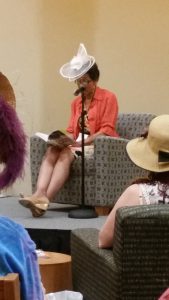 When I think back on Romance GenreCon, I think what I'll remember most are the massive smiles on the attendees' faces.  Kimberly called it "an overwhelming sense of joy," and she nailed it.  Everyone was just so happy to be around other readers who love something they love and who see that love as valid and important - something that isn't always the case, given the general marginalization of romance as a genre.

One of the featured novelists of the weekend, Cathy Maxwell, made the point that "romance has always been subversive because it's women writing about things that are important to us." Obviously not all romance writers or romance readers identify as women, but certainly the perception that romance is just silly lady wish-fulfillment is out there, and it was so lovely and affirming to spend time in a space where we were in general agreement about how Totally Great and Important romance can be.

Of course, romancelandia isn't exempt from the problems that affect other genres, and the Romance State of the Union panel delved into some of those issues, including the lack of non-white romantic representation, particularly in historical fiction. The overwhelming whiteness of much romance fiction raises the very difficult question: who do readers and publishers think deserves a happy ending?  Panel moderator Beth Atwater cited The Ripped Bodice's annual report on The State of Racial Diversity in Romance Publishing, and the authors on the panel were in agreement that writing inclusively doesn't just mean white people writing characters of color; it means having authors and editors of color, too. 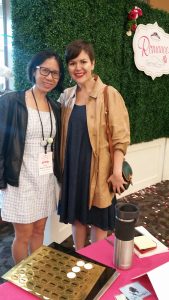 This weekend would have been incredible no matter what, but it was especially important to me because I had the chance to meet Sherry Thomas, the author of many great books, including my all-time favorite romance, Ravishing the Heiress. I've talked about that book so many times I've basically run out of ways to rave about it, but in my mind, it sets the template for what a great romance should be: fundamentally good people doing their best to be kind to and supportive of one another in difficult situations. Give me that scenario, and I'm a goner.

(Sherry Thomas herself was extremely funny and thoughtful throughout the weekend, autographed my personal copy of Ravishing the Heiress, took a picture with me, and didn't back away slowly even though I probably had creepy heart-eyes every time we interacted.)

I could go on about Romance GenreCon for easily a billion words, but instead, I'll share a few additional highlights here:

All in all, Romance GenreCon made for a delightful weekend of book-talk.  I'm excited to delve into some newly discovered authors and, of course, to swap recommendations with my fellow romance-readers.

See you there next year!