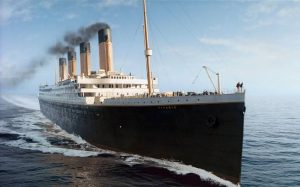 For the past twenty years I have kept my love affair with James Cameron's opus mostly a secret. Few people in my life know of my ability to recite its words by heart and that for a brief, fleeting, period in my life I almost didn't despise the work of Céline Dion. Fewer still know that I have read everything I could get my hands on regarding the Titanic and the real lives behind the story that James Cameron literally romanticized. I forced friends to attend the Titanic exhibit when it came through Kansas City several years ago, and yes, I coerced even more friends to go with me when the film was re-released in theaters a while after that. I guess my secret isn't so secret after all, but the passion I genuinely felt when it was released has been downplayed. By me. I just want to live a normal life.

So, last week when my 10 year old daughter asked if she could watch it for the first time, I threw myself into the hallway closet and dug out my old friend, that dusty DVD that has moved with me from home to home through the years.  It dawned on me that the anniversary of the sinking was coming up so the timing was perfect.  After a brief replay in my mind of anything too "adult" for my daughter (I mean besides all of those people freezing to death in the ocean), I decided the world's most innocent sex scene and a bare boob weren't much to be concerned with. We turned it on.

Right off the bat I realized I actually had forgotten a few things. The opening sequence with Old Rose lasts 84 years. There's a lot of yelling because of helicopters and unnecessary masculinity on display by Bill Paxton. But when everything calms down and the mini submarines are launched into the Titanic where you can see actual footage of the shipwreck's remains, a serenity takes over along with that palpable realization that these old pieces of seemingly rotting junk belonged to real people and represent real lives. If you've been around children anytime lately, you'll know that slow-opening scenes such as these can be a real anxiety-causer for parents. Since my child is a Generation Z tween, she is, of course, perpetually plugged into a device while simultaneously fidget spinning and rolling her eyes at anything boring. When I looked over and took a peek (don't look too long! The eye rolling!) I saw that she was enthralled and I settled into that comfy dialogue I know so well.

But, wait. Oh, that dialogue isn't so comfy, is it? It's bad. Like, horribly written, cringe-worthy bad. If I never hear, "Paint me like one of your French girls," again it will be too soon. And what's with the accents?! There are so many stereotypical "Irish" and "Italian" accents on display it sounds like a mashup between a Lucky Charms and an Olive Garden commercial. And the villains! They're so villainy! In one scene Cal Hockley, Rose's fiancee (portrayed by Billy Zane), lacks a mustache to twirl so instead uses his jacket to fling around himself like an evil superhero with a cape. It is hilarious. And does his henchman really have nothing better to do than to follow Rose around on a sinking ship spying on her?

So, yeah, it's got some flaws... James Cameron isn't exactly known for subtlety, I guess. But that's what also makes the movie so great in other ways. The ship itself is awesome. James Cameron had a 90% to-scale replica built that the actors worked on for a third of a year; the props were made to look exactly as they would have looked on Titanic's maiden voyage; the special effects still hold up. If you're at the end of the movie and you're not reaching for a blanket, you haven't been paying attention because the realism of the freezing cold ocean and the ship after it's lost power still gave me goose bumps 20 years later. Of course, Kate and Leo (I'm calling them by their first names because that's how close I feel to them) have undying chemistry... well, until... you know... the part at the end. I'm going to let you stop reading now if you don't know what happens. I mean, the movie is twenty years old but maybe you don't know... One of them dies. I'm sorry to be the one to tell you. It's Jack. Rose couldn't find it in her heart to move over half an inch on that door in the ocean so he freezes to death and we all CRY AN OCEAN OF TEARS. But, Rose's heart will go on and so will ours. We will never let go! 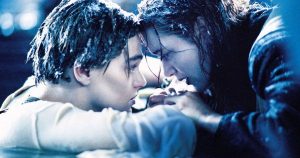 Some folks may refer to this type of movie-watching event as a "guilty pleasure." I feel no guilt whatsoever and despite what I said earlier, I honestly feel no shame. My daughter and I now have another bonding experience under our belts. She cares nothing about bad dialogue or weird accents and she seemed immune to Céline's near yodeling as that giant blue diamond was chucked into the ocean. When I asked the next day what she thought, she simply said, "It was really sad. Especially when you know they were real people." She's right, of course. At the heart of it all, that's what it's about.

-- Sarah Mathews is an Accounts Assistant at Lawrence Public Library