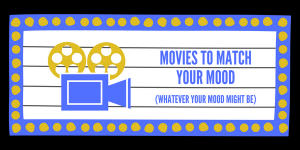 Obviously I love to read, but I can’t read all the time. This was a hard lesson to learn, since reading is both my main leisure activity and, you know, a big part of my job. But sometimes I want to go places and do things outside of my apartment. Sometimes I want to focus on a new hobby. And sometimes, rather than burying my nose in a book, I want to slather on a restorative face mask while watching a movie I’ve already seen a hundred times with a group of friends.

If that last item sounds good to you, too, then gather up the face masks, because I've put together some suggestions for what to watch based on what kind of mood you're in.

When You’re in the Mood to Shed Disgusting Snotty Tears

Let’s start with the obvious choice: The Notebook, a movie that a friend dragged me to see when we were in high school (she wanted to see it, I didn’t). She ended up spending the last third of the movie trying to physically distance herself from me while I sobbed so loudly that other movie-goers turned around to shush me. Other options to exercise those tear ducts: the fantastic documentary Young @ Heart and the sob-inducing (but also very funny) Inside Out.

When You’re in the Mood to Rage

For this category in particular, it's important to assess your rage level. Do you want to emerge from the movie night experience with righteous anger burning in your veins, but also with the sense that you will perhaps put this rage to use? Or do you simply want to feel the rage rising up in you, letting it grow until you're basically a dragon about to spew fire into the skies? If it's the former, let me heartily endorse Mad Max: Fury Road, which is basically a frenetic adrenaline shot delivered straight to the heart, or Get Out, which cloaks its rage in a slow, sickening build until it breaks. (If you're ready to go full dragon, don't play around: just block out an entire weekend and go straight to season one of The Handmaid's Tale.)

When You’re in the Mood to Swoon

In this category, we're basically aiming for something that will have you releasing a long, contented sigh when the credits start to roll. If it leads you to say, "Oh, I love that!"—so much the better. My personal favorite in this category is Dirty Dancing, a movie I have seen easily 100 times in my life and which never fails to leave me starry-eyed over the supportive, mutually empowering romance between Johnny and Baby. Not a Dirty Dancing fan? Number one: I can't relate. Number two: maybe you'll vibe with the angst-in-a-stunning-location romance of God’s Own Country or the pitch-perfect Cinderella retelling Ever After.

(Bonus book recommendation! Those of us who grew up in love with the anthropomorphized fox version of Robin Hood were clearly primed to react strongly to My Boyfriend is a Bear, Pamela Ribon’s glorious new graphic novel about modern twenty-something Nora and her boyfriend, who is a literal bear, named Bear. It may not seem like your thing, but trust me: there will be swoon.)

My Boyfriend Is A Bear

When You’re in the Mood to Get a Little Loose

Look, clearly there is no better option for a night when you want to affirmatively up-talk with your best buds than Magic Mike XXL. Whatever your orientation, this joyous, life-giving, genuinely pro-woman charmer about a bunch of soft bros removing their clothes to classic '90s jams is an experience best shared with a large group. Other great options: Bridesmaids and Girls Trip—basically, you’re looking for a movie about a group of friends sharing an adventure to share with YOUR friends.

I'm always looking to expand my movie-night repertoire, so feel free to chime in with any categories or particular titles I may have missed!  Now, if you'll excuse me, I've got a face mask to apply.