If you listen to much Top 40 radio, you’re already familiar with DJ Khaled; even if you can’t quite connect his name to a particular song or face, there’s likely some liminal awareness. Just close your eyes and think of the times a moment of transition static has been torn through with the bombastic roar of “DEE JAY KHA-LED” just as a beat starts playing.

Oh yeah, that guy! He’s one of the most eminent (and prolific) producers in popular music, responsible for anthems like “All I Do is Win” and “We Take’n Over,” often featuring a who’s-who team of A-list collaborators like Jay Z, Rihanna, and Kanye West.

But DJ Khaled is so much more than a musician; he expands his oeuvre with the recently published motivational self-help manifesto The Keys. Part memoir and part knowledge-bomb, Khaled traces his rise to fame from troubled beginnings while describing his philosophical rules for life– the titular “Keys.” He beckons the reader on the back cover: “Ride with me through the journey of more success.”

And what a journey The Keys turns out to be. Right away, it’s apparent that Khaled isn’t afraid to inject the same explosive swagger of his music into his passages of life advice. “I need you to more than understand– I need you to overstand,” he implores the reader in the opening pages as he explains the fundamental concept of “they.” “They,” simply, refers to anyone out to hinder your success: “‘They’ don’t want you to have breakfast. ‘They’ don’t want you to have Jet Skis.”

This sounds pretty serious, right? In Khaled’s mind, we live in a world fraught with saboteurs, and thus we have to work relentlessly. Luckily, the adversity brought on by “they” also serves to make success all the sweeter. In one of the many guest anecdotes throughout the book, Khaled’s friend Cool explains one such moment of Jacuzzi triumph: “…it was so hot you could have boiled some eggs in there, and he’s like ‘Cool, we did it!’ and I’m like ‘Khaled, how do you even have skin left, bro?’ He had the Jacuzzi cranked up because ‘they’ didn’t want him to have a Jacuzzi.”

The philosophy of The Keys isn’t all paranoia-driven, though, to be clear. Khaled emphasizes relishing the beauty of life and all it has to offer. In one such chapter, frankly titled “Have a Lot of Pillows,” he explains: “That softness reminds your body that it’s time to relax… Pillows are like the angels of my bedroom.” There’s something disarmingly sincere about how readily Khaled divulges this kind of personal sentiment. Having a lot of pillows seems like pretty basic advice, as well, but I’m sure at least person will read The Keys, buy a few extra pillows, and have their life changed. 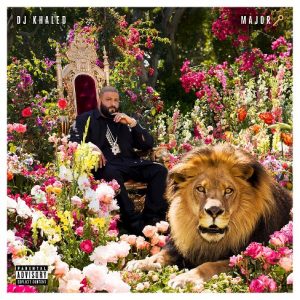 Other advice highlights include a discussion of the value of healthy, delicious smoothies and getting at least one haircut a week. Khaled is ostensibly serious, too, when he informs us to “Start every conversation you have, including ones with your best friend, by saying, ‘This is off the record,’” which is cheesy, but also looks kind of cool.

Khaled takes time to chart his own journey which has led to his current haircut-centric lifestyle. He describes his humble beginnings working for pirate radio in Miami and throwing house parties. For different stretches, he even had to live out of his car while saving to advance his DJ career. As over-the-top Khaled’s character is, his story smacks immediately of the genuine American Dream.

At the same time, hard truths of America are given surprisingly poignant asides in other chapters: “Our prison system is flawed and unjust and the realities of that are heartbreaking… All I’m going to say is that that place is not for humans.” In the same vein, Khaled briefly touches on his experience as a Muslim American, which lends new significance to his idea of the ever-present and adversarial “they.”

The Keys switches from serious to ridiculous with the turn of a page– “Major key for real: don’t drive your jet ski in the dark,” Khaled notes, which could be a pretty solid self-help metaphor, but actually is quite literal. The book is so charismatic that it’s actually undeniably compelling. To compare it to other popular self-help creeds, imagine The Secret enriched with a gusto that can only be conveyed by gold chains and champagne.

Khaled’s unflinching self sureness makes me  feel motivated, and despite everything, that means the book fundamentally works. My only criticism is that upon cracking open its pages, there was no voice screaming “ DEE JAY KHA- LED” at me.