My 11 year old daughter, Alice, graduated from elementary school in May and as if that event weren't enough to cause a flood of emotions, her teacher read a quote from a book that caused another flood from my eyes. From Ms. Bixby's Last Day by John David Anderson, he read: "We all have moments when we think nobody really sees us. When we feel like we have to act out or be somebody else just to get noticed. But somebody notices, Topher. Somebody sees. Somebody out there probably thinks you're the greatest thing in the whole world. Don't ever think you're not good enough." I looked up at my daughter, who was positioned in the back of the risers, the tears streaming down my face, and she looked me in the eye and mouthed, "QUIT. CRYING." Moment over. She's a middle-schooler now. For God's sake, do not cry in front of the middle-schooler!

When I'm not embarrassing Alice with my feelings, we have a wonderfully open relationship where we talk about nearly everything. When her teacher read this book to the class, I knew she'd been affected by it in a way I hadn't seen before. She asked me to read it. I happily did. The book reminded me, in a roundabout way, of Stand By Me, which we decided to watch together as well. Both stories are about boys on a journey. In Stand by Me the main characters are on a search for a dead body that they've heard is on the outskirts of town. The characters in Ms. Bixby's Last Day set out to say goodbye to a teacher who has touched their lives. Warning-- There are Stand by Me spoilers in the following discussion. 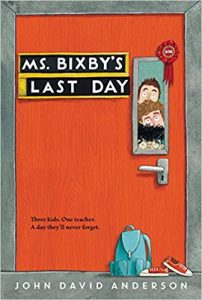 Alice: I was at the front of the risers, actually.

Sarah: Ha! OK! Why don't you tell me why you wanted me to read Ms. Bixby's Last Day?

Alice: Our teacher read it to us and I thought you'd really like the story and the concept of all of these kids skipping school [laughs].

Sarah: Because, in the end, although I'd never encourage you to actually skip school, there are situations where rules are OK to break, and this is an example of one of those reasons? And do you understand why Stand by Me is something I wanted you to watch as a sort of "companion piece?"

Sarah: Maybe we should talk about some of the similarities between the two. The concepts are similar in that they're both based on a group of friends who are sneaking around doing things they're not supposed to be doing.

Alice: With a small amount of money and they're around the same age.

Sarah: Yes, a small amount of money and they're all in middle school. And all boys... Maybe we should think more about that. Why all boys? I guess girls are at the mall!

[We both laugh and then in the midst of the laughter, you can hear the screeching of a thousand cats... OK, four. We have four cats!]

Sarah: Why do we have all of these cats? I wish people could see how many cats are around us right now. They're driving me crazy! Anyway--

Alice: Stand by Me hasn't aged as well in certain parts. Like, they use the "p-word" a lot.

Sarah: Also, they're all smoking at the age of 12. Everyone is constantly smoking.

Alice: And they have a gun.

Sarah: Well, that could be in any movie today.

Sarah: Do you know what a "coming of age story" is?

Alice: Yes. It's basically when a kid grows up. Something changes them and they aren't as innocent.

Sarah: Right! Something that happens in a lot of coming of age stories is there's a long journey and all of this stuff has happened that makes it seem really far and... like in Ms. Bixby's Last Day, they get on a bus, they've been through so much, and then they end up at a McDonald's where they run into one of the character's sisters and it's like, "Oh my God, they're not even that far from home!" Stand By Me is the same way. The kids are walking so far, have to sleep over in the woods, and then the older guys just hop in a car and they're there in 20 minutes. I guess it's symbolic of the journey of their lives. Or something. I don't know. I never recognize symbolism.

Alice: I think where the "coming of age" part really stands out to me in Ms. Bixby is when Steve runs into his sister in McDonald's. Where she threatens that she's going to call the mom and the parents are super helicopter parents who get really mad if he gets bad grades-- that kind of thing. Then he stands up to his older sister and she's not used to it, so she backs down.

Sarah: Right. So, you really see a personality shift there.

Alice: Yeah, it's like at the end of Stand By Me when they find the body and they decide not to take it but instead make an anonymous call. And when Gordy stands up to Ace. It has the same vibe.

[More cats in the background]

Sarah: I reallllly wish people could hear the rumblings of these cats!

Sarah: Anyway...I got distracted. What were we talking about? I get so sad in Stand by Me when Vern loses his comb.

Alice: He brought a comb but he didn't bring any money!

Sarah: I guess something we've learned from both stories is that kids don't know how to budget.

Alice: [laughs] And in both stories they make a lot of mistakes.

Sarah: I'm interested to know why your teacher picked this book to read to everyone. You may not have any insight into this but I'm really curious. One of the reasons I wanted to read it was because I knew how much you liked him and I wanted to get an idea of what books he likes. I mean, as a teacher when you're trying to instill knowledge, I imagine you're pretty thoughtful in your choices.

Alice: It is funny for a teacher to pick a book about a bunch of kids skipping school!

Sarah: Ha! Yeah, but it's obviously so much more than that. He really seemed to understand that you guys were all 10 years old with lives being led differently outside of a classroom setting and that there's more to learn outside of school sometimes. Also, that everyone has different relationships with their teachers but everyone thinks theirs is the most special.There's that one character whose dad has kind of given up on life and I think the mom died?

Alice: Yeah,Brandt. We find out that Ms. Bixby has been taking him grocery shopping. Sort of like stepping in to be the mom. They have a really close relationship.

Sarah: I think that's probably pretty common in a student / teacher world. Well, not the grocery shopping. Or maybe it is! I bet there are teachers out there doing the equivalent of this or maybe even the exact same thing. Although in Stand by Me we learn that Chris has a pretty terrible teacher who made him feel awful about himself.

Alice: I have one last thing to say about coming of age. In the first part of the Ms. Bixby's Last Day, the boys are running around talking about cooties and making fun of people for having cooties. By the end, they've grown up and that's over.

Sarah: Right! Like you know they will never talk about cooties again. Cooties are done. Do you find that at your age-- you're 11--do you feel like you're in a position where you can see where your personality is changing like that?

Sarah: Is there a sadness to that? Or is it exciting?

Alice: It doesn't seem sad. It happened kinda slowly, so I didn't notice at first. It's just something that happens so I guess I don't really care. And sometimes I still laugh at things that would be considered a preschool joke. Like, when someone says "duty." You know, I'll be like, "Ha! doodie!"

Sarah: Well, that never stops. Even as an adult.

Alice: That's good. I always want doodie to be funny.