Lawrence author George Frazier celebrates the wilderness he finds in Kansas, lyrically linking the present with the past in his new book The Last Wild Places of Kansas: Journeys Into Hidden Landscapes.

The Last Wild Places of Kansas reads virtually as smoothly as song lyrics, interconnecting personal and historical anecdotes with vivid descriptions and occasional wry wit about some of the remaining natural wonders in our state. Frazier shares his own compelling adventures in seeking out special locales and uncommon wildlife and links them with historical context from Native American and early explorers’ experiences. The wilderness described in the book includes both public lands and many private properties because, Frazier notes, ninety-eight percent of Kansas land is private property.

Frazier writes: “…I’d found the stories of two Shawnee traditionalists, two wild springs, two mysteries lurking somewhere in the backyard of my childhood. Had I stumbled onto a lost fossil record of wild Kansas? If two Shawnee [Indian] traditionalists from the 1800s knew these places—loved these places—and if, as I believed, the traditionalists sought out wild landmarks with spiritual gravitas—the kind that are rediscovered century after century by careful students of the land—then this might be a rare chance to experience a living history, an electrifying sense of place where past and future collide in deep time.”

This quote resonates with me and feels a bit like magical realism. Furthermore, reading Frazier’s story is a surreal experience for me because I can relate to it personally. Like the author, I grew up in suburban, highly-developed Johnson County. The nearest open land was not so wild; it served primarily as our neighborhood waterworks and secondarily as a park with mowed grass and a playground. Watching episodes of Little House on the Prairie on TV as a kid, I started wondering about the remaining wilderness near my home, but it was many years later when I finally discovered the small prairie within Shawnee Mission Park–only a few miles from the place where I grew up.

Frazier says in The Last Wild Places of Kansas: “I think many of us have this experience of one day just ‘waking up’ to where we are.  I’ve seen it time and again. For lots of folks it requires picking up and moving someplace else. When I first discovered the prairie, and learned how to ID rattlesnake master [a plant found in tallgrass prairies], I felt like I’d moved to a different country. All of a sudden there was this new mythical place all around me, this tie we had back to a lost time. I wanted to write the book for others who felt this.”

Wilderness throughout Kansas is explored in the book, from a hidden spring in the center of Kansas City, Kansas and ancient pecan trees at Fort Leavenworth in the Northeast to the expansive western Cimarron Grasslands and the transcendent Red Hills of south central Kansas. 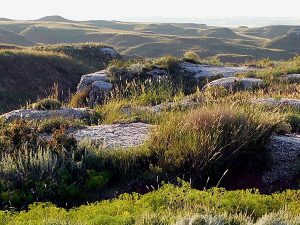 Frazier also writes passionately about surviving wild animals: “…there should be a few places where prairie dogs can just be prairie dogs, where they can kick back and fulfill their niches in the grand scheme of the shortgrass prairie, work on their whistles, try to dig to China or least to Amarillo.”

The Last Wild Places of Kansas includes many adventures and optimistic searches for uncommon wildlife like southern flying squirrels. And while these animals may be hidden, discoveries are still possible–even nearby. Frazier and his daughter Chloe successfully tracked and documented the return of northern river otters to the Haskell-Baker Wetlands, just north of the Wakarusa River in Lawrence. Although the flying squirrels have remained hidden, hope remains. 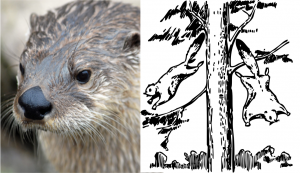 For further reading, check out some of Frazier’s inspirations: thought-provoking environmental advocates and lyrical storytellers who invoke a strong sense of place and commune with nature like Gary Snyder, Aldo Leopold, Paul Gruchow, Annie Dillard, Rick Bass, and Edward Abbey.

You can find The Last Wild Places of Kansas and other entertaining and informative books about natural history and environmental concerns by Lawrencians on this list in the Library’s catalog: Lawrence Authors Write About Nature and The Environment.

The Last Wild Places of Kansas