As Lawrence was hit by one snowstorm after another last winter, a few of us in the Collection Development office decided to cheer ourselves up by reading a book called The Worst Journey in the World.  It’s a memoir by Apsley Cherry-Garrard, who traveled with Robert Falcon Scott on his final attempt to reach the South Pole in 1911.  What better way to ease the pain of shoveling a few inches of snow off the driveway than listening to someone else trudge across Antarctica in 24/7 darkness and temperatures so low it took hours just to open up his frozen sleeping bag?

The Worst Journey in the World

Well, that story gave us all warm fuzzies, as it has millions of readers (the memoir tops National Geographic’s list of the 100 best adventure books of all time).  So when we read in the Lawrence Journal World that a local Kansas Air National Guard chaplain had been assigned to work in Antarctica, we figured this might be our big chance to talk to someone who has actually been there.

Luckily the Rev. Kevin Hopkins, who serves as Minister to the University at Baker when he’s not 9000 miles away trying to stay warm, made it back safe and sound, and was willing to take some time to speak about his recent adventure with the likes of me, who has never done anything remotely so honorable or courageous. He did indeed visit the South Pole, and here is what I learned from him about the experience.

Antarctica has its own church.

McMurdo Station is populated during the Antarctic summer months by about 800 National Science Foundation researchers and staff, and around 100 military personnel.  Hopkins served as chaplain to them all, conducting services in the Chapel of the Snows, a non-denominational Christian church constructed to serve the spiritual needs of Antarctic residents.

Hopkins, who has a degree in social work from KU (in addition to his Master of Divinity from Northwestern), said he spent much of his time counseling fellow Antarcticans.  People living there experience all the usual problems of modern life, only they have to work through them in an isolated environment.   Around the clock sunlight messes up sleep cycles, and a diet of frozen and canned food can also be hard on one’s system.  Maintaining relationships back home is especially challenging with no phone service and spotty internet.

How cold is it really?

Summer temps at McMurdo were in the upper 20s and lower 30s, and Hopkins said he went outside every day.  But when he overheated he could head for the South Pole, where it was 41 below.

There are no cats in Antarctica.

Okay, my kids made me ask him if there were cats.  I figured maybe there would be one or two around, like on a ship, to keep the mice down and boost morale.  But it turns out there aren’t any mice, either.  Or mosquitoes.  Most of the continent may be uninhabitable, but hey, no pests!

You’re not allowed to pet the penguins.

There are Adelie penguins everywhere, and they want to be near you, but you’re not allowed to touch or interact with them in any way.  To do so would be a violation of the international treaty governing Antarctica, and apparently they are very serious about it (another reason why there are no cats).  Hopkins told me you are instructed to get away from penguins who are being friendly.  And while you may be bullied by skuas, who are like grouchy seagulls on steroids, the treaty forbids you even to shoo them away.  Interactions with wildlife are so taboo in Antarctica that when penguins amass on a runway, pilots wait for them to disperse on their own before taking off.  I found it comforting to hear that wildlife was so protected, but I do worry about Adelie penguins with hurt feelings.

If you go on a hike, you have to pee in a bottle and pack it out.  Enough said.  Luckily, Hopkins didn't have to go when he was out and about, and I didn’t ask any more about that, although I’m sure my kids would have loved me to pursue that line of questioning further.

The shelter Robert Falcon Scott and his men built on the first British expedition to Antarctica (1901-1903) still stands a few hundred yards from McMurdo Station.  Scott returned to this hut and used it to stage his fatal last journey to the South Pole in 1911 (the expedition recounted in The Worst Journey in the World). Hopkins visited the building, which remains much as it was left in the early 1900’s, down to small details like chunks of seal blubber, still leaking oil, cut by the British to burn on their stoves.

The Lost Photographs of Captain Scott

Someone may offer you 20 bucks to lick an 80-year old dead seal.

As Hopkins reminded me, Antarctica is a desert, as well as being frozen.  Outside of Scott’s Hut lies the “Guardian of the Hut,” an 80-year old, mummified seal.  Hopkins said he was offered 20 bucks to lick it (he didn’t).

McMurdo Station has a good library.

Staffed by volunteers, the McMurdo library contains works about Antarctica along with lighter reading material and a collection of magazines.  It was a hub of social activity on Friday nights where people gathered to visit and put together puzzles.  Hopkins read Scott’s memoir while there.

When I asked him if he still has an interest in reading or viewing anything about Antarctica since his return, such as Werner Herzog’s documentary about the people who live there, or David Grann’s recent book about a retired British special forces officer obsessed with completing Ernest Shackleton’s failed trek across the entire continent, I was surprised to hear him say yes.  In fact, he had recently viewed John Carpenter’s classic 1982 horror flick, The Thing, which stars Kurt Russell, Keith David, and Wilford Brimley as Antarctic researchers tormented by an unfrozen alien being.  I won’t reveal any spoilers.  Suffice it to say you just never know what will happen when you take a man away from his Grape Nuts.

Encounters at the End of the World

Shipwreck at the Bottom of the World

Hopkins said the time difference in Antarctica frequently messed with his head.  They are 20 hours ahead, so the live feed of last season's AFC Championship game between the Chiefs and Patriots aired there on a Monday morning.

Rockstars really do get to go wherever they want.

When he took a field trip to the New Zealand station, Hopkins ended up having lunch with a nice young woman he met there named Ella.  Upon his return to McMurdo, someone asked if had run into Lorde.  Who?  Turns out he had dined with none other than Ella Marija Lani Yelich-O'Connor, a New Zealander better known to the world as pop sensation, Lorde, of “Royals” fame.

Our men and women in uniform are special

Just knowing there are people in the Air National Guard willing to drop everything and go to the ends of the Earth in service to others, and who are as thoughtful and serious about it as Kevin Hopkins, makes me feel great about our country. 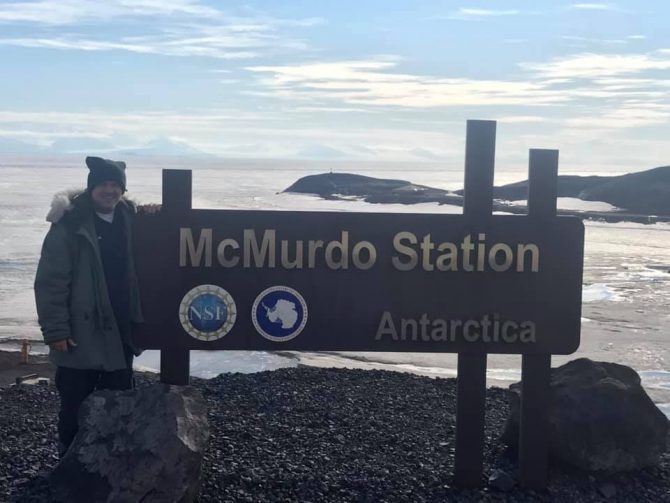