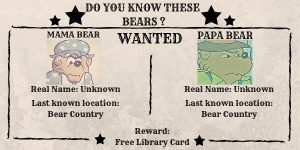 So, Berenstain Bears. Yes, not Berenstein, though that’s an entirely different blogpost. The Bear Family; Mama, Papa, Sister, and Brother have been staples of children’s literature since 1962 and still find themselves going on all sorts of bear-related adventures to this day. That’s 57 years worth of stories!

One thing that’s always struck me as odd was the Bear family’s names. I mean, who names their child Sister? Was Brother Bear named something else before Sister was born? What are Mama and Papa Bear’s real names? Did their parents look at them as babies and go, “Yep, he’s a Papa Bear for sure!” Are these traditional bear names in this Bear universe?

Now, you’re probably thinking, “Margo, this is a children’s book. They can be named whatever the author wants. Don’t think too much about it.” While that might be true, I will always think too much about things. It’s my super power. So, when I discovered a Berenstain Bear podcast called Deep in Bear Country, I was shocked to learn that Mama and Papa Bear may have had other names before they became parents.

Recently, Stan and Jan Berenstain’s son Mike published a book where the Bear family attends a reunion. While at their family reunion, Brother and Sister find a picture of Mama and Papa in highschool. They ask Gramps about the picture and he reveals that Mama and Papa Bear used to be called “Missy and Junior.” Now, the host of Deep in Bear Country thinks that this new book should not be considered as part of the “Berenstain Bear Canon” and I choose to agree. I mean, what kind of names are Missy and Junior? Is Missy short for something? If Papa Bear used to be called Junior, then what is Gramps Bear’s name? Is he named after his father? Is it a nickname? What are these bears hiding? When will the madness end?!?

The mystery of Mama and Papa Bear’s real names may have an answer, but I choose to remain skeptical. While I love a good mystery, I think some questions are most interesting when left unanswered. What do you think? Are Missy and Junior good names, or should Mama and Papa just be Mama and Papa?