Attention is the beginning of devotion. ~ Mary Oliver

I’ve written before about the importance of unplugging (and the difficulties of doing so) but friends, I’ve been taken by a deeper desire. In this case, the desire looks like moving to Ireland, living in a village where I raise my own food and barter with the locals and visit the pub every night for a bit of craic and generally forget that anyone but my family and the other villagers exist. Or, perhaps more realistically, hightailing it eight hours to the west and setting up on a ranch in Colorado where I can see the mountains and smell the pines, reliant on myself and communing with goats.

For a moment, reality intrudes. The federal government, who administers my students loans with tenacity, would be really hacked off if I defaulted. Possibly also the government of Ireland, w 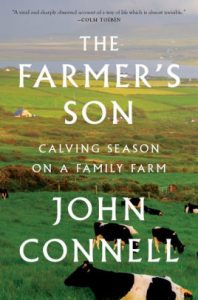 ho I’m guessing doesn't really need a middle-aged immigrant librarian with a dodgy lower back. And since marijuana has been legalized in Colorado, can I really afford property there anymore anyway?  Likely not. And to put all the facts on the table, I’ve never even mucked out a stable, let alone inseminated a cow. But dream I must!

I feel like the universe is certainly conspiring with me because it’s given me three really great books in the last few weeks. If not that specific village in Ireland or the mountains of Colorado, then perhaps some glimpse of hope and beauty that I can create here, now, in my own life. These books are filled with beautiful writing about the meaning of hard work and solitude, of family and relationships, of being afraid and stupid and doing it anyway, of cows and sheep and dogs. They are also filled with wisdom about how to balance your connection to the world, even as you wish to sever it.

A year ago, while in Ireland, I bought a book with the title The Cow Book. I only knew that I wanted something to take back with me that was unique to where I was, that I would use and enjoy forever. A memoir about an Irish family farm would do nicely. As it turns out, that book is now being published in America under the name The Farmer’s Son: Calving Season on a Family Farm by John Connell. Connell, a wayward son, finds himself home to help his parents, mainly his cantankerous father, on the farm during a dreary Irish winter.  The book becomes a thoughtful accounting of his time and a meditation on life, interspersed with an interesting (yes, really) history of cows. Irish writers win me every time with their poetic language and this book is no exception. Connell is on the mend from a mental breakdown, but also he’s unearthing something, as well. It’s satisfying to watch him both reveal and find himself, one entry at a time 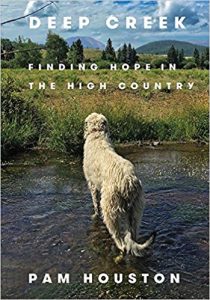 Another book that is closer to home, yet has a similar feel and message, is Deep Creek: Finding Hope in the High Country by Pam Houston. Like Connell, Houston experiences her relationship with the land as a healing one. On a whim in her early twenties with money she earned from her first book Cowboys Are My Weakness, Houston puts 5% down on a 120-acre tract of land in the Colorado mountains. She makes a way, even though she knew next to nothing about ranching, or even staying rooted to one place. Coming from an intensely dysfunctional family, Houston mines her past while we’re also learning about the high country and animal husbandry.  With her menagerie of animals (including her beloved Irish Wolfhounds - I’m sensing a theme) she exercises some demons and finds hope through the intense difficulty of the landscape and through the community that welcomes her in. (Reader, I cried.) As perfectly as Connell captures the Irish Midlands, Houston captures the American West.

Both writers do an incredible job of creating memoirs that weave the day to day work of caring for land and animal with personal remembrances, historical facts, and deeper meditations that ask readers to do some searching of our own and offers another lens.

These books dovetail with a third book I just finished How to Do Nothing: Resisting the Attention Economy by Jenny Odell. On the surface of it “doing nothing” is pretty much the opposite of what happens on a farm or a ranch where there is always something to be done, but that’s not exactly what Odell means by that phrase. What she means is the when you disengage from the “attention economy” (social media, for example), you are free to engage in something else. For Odell, that means investing our attention in our immediate surrounding, what she calls our “bioregion” and learning things like the names of plants and the song 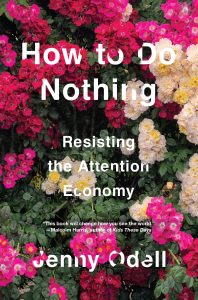 of local birds and the history of the tribes that lived on the land. Both Connell and Houston describe those very things as a matter of course in their memoirs. Through work and daily attention, both authors learned not only about their environments and the animals in their care, but about themselves. The discovery of what they were made of, what they were worth, what they valued intrinsically happened not because of a number of likes or shares, but because they got quiet and listened. They paid attention. (For more information, Kate and I have a long take on How to Do Nothing in an upcoming podcast.)

I realize that the vast majority of us can’t drop out of our lives and pick up another. Shearing sheep and delivering cows and having a nightly Guinness might never be my life. I suggest you read The Farmer’s Son and Deep Creek for expansion and inspiration and then take on How to Do Nothing when you want to figure out how to make that kind of “third space” in the very life you are currently leading, right where you are today.

How to Do Nothing