I am captivated by the storytelling of Jackalope Lamat Kelly, also known as Jack or Jaq. The short stories and flash fiction in Jackalope, opens a new window by Denise Low feature the Indigenous-centered, anthropomorphic and playful excursions of one inter-gender cryptid. These tales are based on the long-lived legend of a hybrid offspring from a jackrabbit mating with a pronghorn ("antelope"), but with contemporary cultural layers of meaning. Denise Low the 2nd Kansas Poet Laureate, professor, publisher and award-winning author shares her own version of Native American trickster tales in Jackalope. And it’s apropos for this author that it echoes her heritage which includes Delaware (Lenape/Munsee), and Cherokee family. 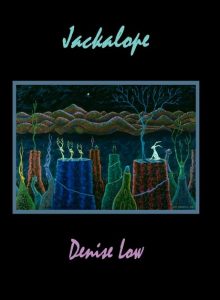 There is a serendipitous flow in reading these adventures as we discover more about this enchanting and wry character. Most stories begin with the title phrase, “Jackalope walks into a … (bar)”, but a variety of other venues set the action too. With danger afoot comes an involuntary rush of hormones in “Jackalope Walks Into a Roswell Bar” and female Jaq’s gender shifts to male Jack. The Pushcart Prize nominated piece “Jackalope Walks Into An Indian Bar” includes the excerpt below; an inquisitive old man is asking about Jack’s origins.

“So, if you don’t mind me asking, how exactly did your parents do it?”

“Oh, they didn’t. A taxidermist in Wyoming grafted antlers onto a rabbit.”

“Come on, I don’t buy that. You’re among Indians. Tell us the truth.” Everyone looks at him.

“Okay. We come from Mexico, east of the Sierra Madre Mountains, where Rabbit and Deer are well known spirits, Sun and Moon. Somewhere north of the border, Deer changed to Antelope.”

The old man nods. Jack continues, “Our clans mixed together during a shaman’s peyote ceremony. The elders tell me everyone traveled to the stars that night. They saw Earth as a globe of spinning green flames.” Jack glances around. Everyone in the bar is listening. He continues, “The next day we found ourselves changed. Sometimes we seem to disappear, but this is when we are returning to the sky world. Yes, we might look ordinary, but some of us still have the gift of traveling to the stars and back.” Jack notices the hush as he concludes, “So we are part factual and part mythological, just like everyone else.”

“I thought jackalopes were fairy tales,” says a young man.

“We are all made up of stories, some true and some less true,” answers the old man.

Jack enjoys the ensuing silence and the tart taste of wheatgrass served in a luminous shot glass. This is the best bar in town.

Low celebrates authors, many who are Native American, within the tales of Jackalope. Among those featured are Gerald Vizenor, Louise Erdrich, Sherman Alexie, Rane Arroyo, and Judith Roitman. Stanley Lombardo is heroic in the magical metafiction scene of “Jackalope Walks Into a Gilgamesh Tablet”. One of the Indigenous-centered stories is “Jackalope Walks Into a Sherman Alexie Narrative”. 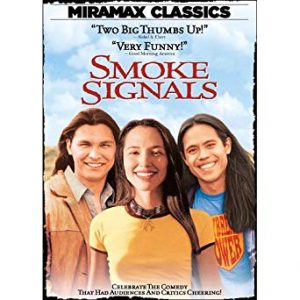 Watching the poignant drama-comedy movie Smoke Signals, opens a new window provides a nuanced experience after reading the Sherman Alexie episode, noted above. The movie is based on Alexie’s short story “This is what it means to say Phoenix, Arizona”. 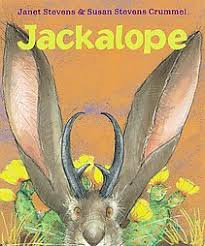 I wanted to check-out the children’s book Jackalope, opens a new window by Janet Stevens because of the title. I hoped it would resonate with the classic Western American legend (or even better if it had relevance to Indigenous mythologies), but instead this is a youthful tale told in rhyming, silly prose about a jackrabbit who wishes to be noticed, even feared. This book is a parable about self-acceptance and honesty. The story includes a coyote as trickster or foil, but only the jackalope’s origin connects to the legend of a pronghorn ("antelope") and jackrabbit pairing. 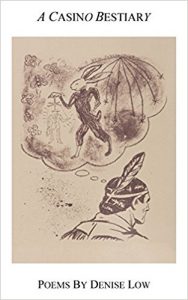 One More book by Denise Low that offers meaningful connections to Jackalope is Casino Bestiary, opens a new window. A trickster rabbit and a Native American image are on the cover and inside is wise storytelling in rhythmic, thoughtfully-outspoken and emotionally raw poems. Reading Casino Bestiary is an experience in risk, like gambling or spinning the roulette wheel, and our lived experiences; you can't anticipate what's coming on the next page. In just 50-some pages, it includes playful explorations and plain-spoken truths with much gut-wrenching meaning. There is worrisome truth in the piece titled “Bureau of Indian Affairs School, 1985”. A favorite poem of mine is “Woody Woodpecker, A.K.A. Pileated”, which gives a cryptic sense of reality. Other favorites reflect natural elements and place-connections, clearly rooted in the Kansas Flint Hills or in or near Lawrence. Go ahead, open these pages, take a chance and be brave! 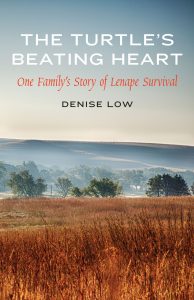 Another enlightening book by Denise Low is her recent memoir Turtle’s Beating Heart: One Family’s Story of Lenape Survival, opens a new window. Candid, compelling, and thoughtful personal stories of resilience are interlaced with poetic prose and occasional wry humor. Low generously shares a deep exploration into her family’s ancestry. Vivid place connections include Lenape (Delaware) Indian landmarks in North Lawrence. Possibly my favorite quote by Low is found in this book, “All Native people live in at least two worlds, usually more.”

I hope I’ve inspired you to take a chance to explore these hybrid reality stories, particularly in the writing of Lawrence-based Denise Low.