The release of Christopher Moore’s latest novel, Noir, is just around the corner on April 17th, making this a great time to look back over some of the author’s other work and to give an idea of what you can look forward to if you decide to pick up the satire-mystery novel. 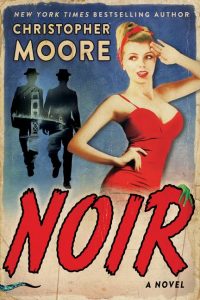 My first Christopher Moore reading experience was a perfect example of how his work should best be enjoyed. It was a hot summer afternoon, and I was a college age temp worker manning a hospitality tent at a NASCAR race.The duties were light. The day was long. The sport was boring. Smart phones did not yet exist. Escapist literature was made for this scenario.

Enter Christopher Moore and his debut novel Practical Demonkeeping (1992). I was transported to the cool forests of Northern California and the small fictional town of Pine Cove, populated by colorful characters and the setting for a delightful monster mystery.

Nothing could have been more appropriate to the experience of reading Moore. His work is light, funny, escapist, and perfect for a hot summer afternoon when one would prefer to be somewhere or someone else, having an adventure, discovering a supernatural world underlying the real one, letting the imagination run wild and solving a supernatural mystery.

Moore’s best known title is probably his irreverent tale about the life of Jesus from the perspective of his pugilistic buddy, Biff. In Lamb: The Gospel According to Biff, Christ's Childhood Pal (2002), Moore shows what—for him—qualifies as his serious side, taking something ostensibly weighty, like the life of Jesus, as a starting point and spinning a fun tale around it.

He does something a little similar in his two Shakespeare based novels, Fool (2009) and The Serpent of Venice (2014), both of which follow the exploits of Pocket, a character loosely based upon the fool in King Lear. Sacré Bleu: A Comedy d'Art (2012) also falls roughly in this same category, taking inspiration from the lives of painters in late 19th century Paris. While these could be taken to represent the more serious side of Moore’s work, they still offer delightful, supernaturally driven plots. Fans of Stoppard’s Rosencrantz and Guildenstern are Dead will find something of the same spirit here.

I like to think of the rest of Moore’s works as silly summer reads. Bloodsucking Fiends: A Love Story (1995) and its two sequels revolve around vampires in San Francisco. Real area landmarks and locations lend local color to the genre enjoyment. The same goes for  A Dirty Job (2006) and its recent sequel Secondhand Souls (2015). These books use the city to great effect, reinforcing a charming cast of recurring characters like the Emperor of San Francisco and his royal hounds Bummer and Lazarus. All the books on this side of Moore’s bibliography share a fun indulgence in amusing characters, adventurous plots, and silly monsters. Think of the funnier episodes of The X-Files.

Look for Moore’s latest novel Noir soon. It fits the latter mold. Adventurous escapades involving secretive government agents, dark alleys and nightclubs Chinatown, shady characters, and not one but two ridiculous monsters. Like the author’s other books, Noir is a fun read which shouldn’t be taken too seriously, but should absolutely be taken on your summer vacation.

-Aaron Brumley is the Technology Coordinator at Lawrence Public Library.