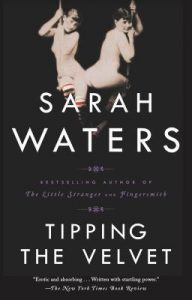 I have been having a love affair with Sarah Waters’s books, since even before I actually read any of her novels. As an undergrad, I worked in a little bookstore, and during my shifts I would drift around, waiting for customers, waiting for my next class, passing the time by trailing my fingers along the spines of all the books I knew I just had to read.

One particular book appealed to me instantly—the image of two fuzzy female performers against a black background: Tipping the Velvet. I had no idea what the book was about, no idea what I was getting into before reading the summary. As soon as I did, I decided that oh no, this book wasn’t for me after all. Perhaps it was too queer. Perhaps it was too literary. In either case, I never read the book, but I visited it often while I was at work. 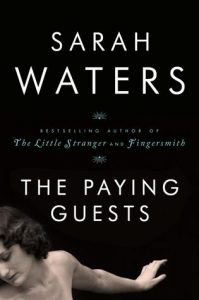 It wasn’t until many, many years later that I finally read one of her books: The Paying Guests. I was drawn to the title, the cover, the promise of a historical fiction set during one of my favorite time periods—the 1920’s. Reading that book was a revelation—you mean queer people (queer women, queer femmes) can actually exist in historical fiction? I remember ranting and raving to someone about how it’s like “they” don’t even exist in books. Still using “they” to refer to queer women, because I wasn’t quite open to referring to them as “us” just yet.

As someone who is now comfortable enough in her skin and her identity to unabashedly state that I am queer, I am femme, I am Latinx, I can also say what a flippin’ gift it is to read about queer women in truly stunning historical novels. Sarah Waters is incredible. I’ve long described her as one of my favorite novelists even though I am just now reading more of her books. 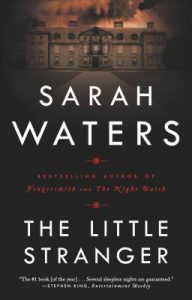 It started with The Little Stranger: after leaving a movie theater with a friend, she pointed out the poster for the movie adaptation of the novel. “Look! They made The Little Stranger into a movie and it looks super creepy.” We both adore The Paying Guests, so I merrily suggested we do a buddy read and then watch the movie afterwards. Being excited with that idea, and being too impatient to wait for the holds list, I purchased us both a copy.

The Little Stranger has all the elements of stories I love—a once prestigious family struggling to keep up with a post-war society that is rapidly moving forward, a country doctor who is never quite what he seems and never quite gets what he wants, and a dilapidated old house that takes on a presence of its own. As the reader, you are introduced to Dr. Faraday as the protagonist, when really The House is running the show. This book is like Downton Abbey, but Gothic! 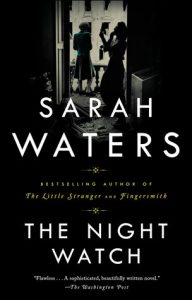 After finishing that book, I had a craving for more WWII stories, so I immediately began reading The Night Watch. So far, this one is my personal favorite. The Night Watch is chronologically backwards—the story starts in 1947 and ends in 1941. First you read the ending, and then gradually, the beginning is revealed, and it is devastatingly beautiful, heart-wrenching, perfectly written. This novel has a character we should all aspire to be—someone who is truly kind, who does good for the sake of doing good.

At the moment, I’m thumbing through the pages of The Paying Guests again. More than just a 1920’s novel, this book tells of the love affair of two women, one of whom is married. The story is gorgeous, romantic, and dreadful. A crime is committed, and there are major consequences. Reading this novel again, I appreciate it so much more now than I did originally. I can’t help but think that all of Sarah Waters’s books are perfectly written—the words are perfectly placed, the sentences perfectly structured. What a stunner these books are. 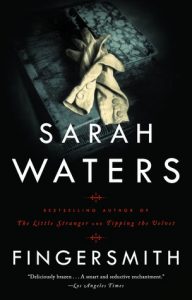 Unintentionally, September has become Sarah Waters Reading Month for me. That’s what I’m in the mood for—all I want to do is work my way through all of her books and be transported back in time. I want to be amongst the glamour and hidden destitution of the 1920's. I want to walk through the bombed out buildings of 1940's London. I want to spend time among scheming servants in Victorian England as the plot thickens. Reading Sarah Waters is the closest I can get to time traveling; every passage is so richly detailed and researched. It’s like her words contain magic.

After I finish with The Paying Guests, my plan is to move on to Fingersmith—I’ve cheated a little and read the first fifty pages already. Perhaps I’m being ridiculous, but I can already tell that this book will end up on my Masterpiece shelf: a highly coveted position occupied by only Donna Tartt's The Secret History and Maria McCann's As Meat Loves Salt. From there, I’ll learn more about spiritualism and female prisons of the 19th century in Affinity. I will finish with Kitty Butter and Nan King: music hall stars, male impersonators, lovers—I think it's about time I finally read Tipping the Velvet. I can’t wait.

Cover image: Sally Messham as Nancy Astley, in an adaptation of Tipping the Velvet. Photo by Jay Brooks, via sarahwaters.com.