We’ve now entered into what I’ve deemed the “weird phase” of Marvel.

Brought on by the commercial and critical success of the previously unknown property Guardians of the Galaxy, director James Gunn and co-writer Nicole Perlman have paved the way for indie creators to work on blockbuster titles while bringing their own unique visions and perspectives to the Marvel Cinematic Universe.

Yes, it has to fit within the overall Disney/Marvel branding aesthetic, but early trailers for Thor: Ragnarok, directed by the mastermind behind What We Do in the Shadows Taika Waititi, and Black Panther, directed by Ryan Coogler, look as if Marvel’s team have decided to shake things up a bit.

As someone who is typically in a state of comic book movie fatigue, this infusion of creative vitality helps keeps the superhero formula from becoming stale and pastiche while introducing a much more diverse and eclectic vision of superheroes to an already expansive world.

However, I feel that there are two beloved characters in particular who have been overlooked and deserve to make their onscreen debut either as part of a Netflix series or the new Marvel Phase: both She Hulk and Howard the Duck.

She Hulk by Charles Soule 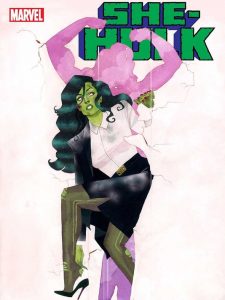 She Hulk stars Jennifer Walters – attorney at large. She’s just your average Joanne, except she happens to have green skin and superhuman strength combined with a lack of anger management skills.This story treatment by Charles Soule in particular opens with Jennifer losing her job at a law firm because she failed to bring in high spending, superhero clientele. In a quest for self discovery, she decides to open up her own legal agency while taking odd jobs to pay the bills, even if it means representing the children of super villains in immigration law cases or patent violations filed against Iron Man himself.

Charles Soule has perfected the art of superhero writing, as much of Jennifer’s story focuses on her daily life and social interactions rather than building up to an epic showdown or cosmic conquest. In many ways, this approach makes Jennifer’s story even more relatable, as she goes to the bar after a hard day, struggles to find work in a tough job market, and faces discrimination because of her appearance. For instance, nobody will rent to her because they’re afraid she’ll hulk out and destroy the premises. And you think your insurance premium is outrageous.

The dialogue is heart-warming, and Jennifer’s struggles serve as an allegorical message that speak volumes about our current economic and political climate. She Hulk will become one of your new favorite super heroes by the end of the story, and it would be a perfect series to adapt for Netflix’s Marvel Universe. Even Jessica Jones’ BFF Hellcat makes an appearance as She Hulk’s trusty sidekick, so we can only hope that Jennifer will show up at some point as part of the Defenders, fingers crossed.

Howard the Duck by Chip Zdarsky

The most recent Howard the Duck manifestation by Chip Zdarsky is a whole lot of weird, self-referential, fun. The story opens in a Secret Wars Volume 0 title called What the Duck? (I know it’s confusing) that follows the life of private investigator Howard the Duck. Like She Hulk, he is down on his luck and looking for work. He can’t even afford to hire a secretary and instead uses a paper mache creation with a face drawn on it to greet his nearly non-existent clientele.

Howard’s luck changes when a mysterious gentleman asks him to retrieve a stolen necklace that will have him speeding across the galaxy in true Doctor Who fashion and solving cases while meeting plenty of extraterrestrial creatures. The story continues in serialized format, as it was one of the more popular Secret Wars publications, and is one of my favorite titles done by Marvel as of late.

Howard the Duck is a unique reading experience with zany characterizations and plenty of laugh-out-loud scenarios. The story has a little bit of everything: She Hulk listening to Taylor Swift while watching cat videos? Check. Rocket Raccoon shaving a map of a spaceship into his chest hair? Check. An 80s workout montage complete with a tank top that says “No Harm No Fowl?” Check. In particular, I’m a massive fan of the many Film Noir references sprinkled throughout the dialogue, art style, and overall tone that balances beautifully with the more humorous elements to hit all the right notes.

What makes Howard the Duck so refreshing is that Chip Zdarsky uses the graphic novel media to make fun of running gags and cliches within Marvel in the same way that Enchanted pokes fun at Disney Princess stereotypes. I think that we need more lighthearted superhero fare that moves us farther away from the brooding, Christopher Nolan Batman type of hero.

Howard the Duck proves you don’t need an impending apocalypse or a serious personality to tell a good story.Howard would be an excellent addition for new adventures in cosmic Marvel. Who wouldn’t say no to a Film Noir space adventure? I sure wouldn’t.

What lesser known Marvel titles would you like to see adapted next? I’d love to hear your thoughts. Until then, I’ll just keep hoping that I’ll get to see some of my comic book favorites on the silver screen.