I count several artists and art lovers in Lawrence among my treasured friends. When I learned my friend, Myles Schachter, was creating a sculpture for this year’s Outdoor Sculpture Exhibition I decided I wanted to find out more about his new work of art. Read on to see what I found, and more art-related news and events. Most of the artists featured here were kind enough to share their reading recommendations. At the bottom of this post are books by Lawrence artists.

Myles Schachter is an accomplished sculptor who apprenticed years ago with KU Professor Elden Tefft. His sculpture, titled American, celebrates the diverse origins of many different people who call this country their home; it is installed at the southwest corner of 8th & Massachusetts, near RND. Myles explained his inspiration for American:

"I attended the Naturalization Ceremony at Johnson County Community College two years ago. There were 400 people from 71 countries proud to become American citizens. The event was heart-warming with music, poetry and a speech from the College President. He spoke about sharing the values of America – freedom, community and compassion – while maintaining your heritage. He emphasized that it is our diversity and our native customs which make this country so great.

I was sitting in Leonardo di Vinci’s house, now a museum, a month after this experience. During a movie in Italian, I had a vision of a finished sculpture comprised of many different stones representing this diversity. I returned to Lawrence to bring it to life."

This poem will be posted near the sculpture:

I speak English …and hundreds of other languages.

I am from Europe …and everywhere else.

I celebrate Thanksgiving …and Pow-Wow and Ramadan and many Festivals of Light.

I cook with ketchup …and Sriracha and Peri-Peri.

I like baseball …and cricket and bocci and mah-jong.

I care for my family …and my neighbors and my community

I am you and you are me.

This year's Outdoor Sculpture Exhibition will officially open with a tour during Final Friday, June 28 at 5:30 pm; the tour will begin near Merchants at the northeast corner of 8th & Massachusetts with Kenneth Peters’ sculpture, Birdhouse #8. (Credit to Porter Arneill for keeping me informed!)  Find out about the whole sculpture exhibition, click here, opens a new window. 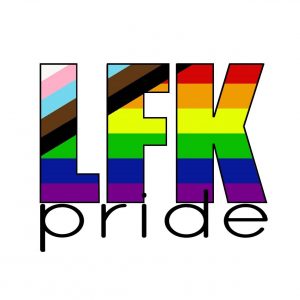 "June 28th is the 50th anniversary of the Stonewall riots, a rebellion against police raids that helped bring about the gay rights movement. To celebrate and reflect on this anniversary, LFK Pride is organizing a night of LGBTQIAP+ visual art and music at the Lawrence Percolator on Friday, June 28th, 5-9. The art exhibition will run through July. For more information, check out LFK Pride’s Facebook page here, opens a new window."

A great many east Ninth Street neighborhood-oriented and community connected artworks are being generated from the ArtPlace America grant; Visit the website to see all the exciting details, click here, opens a new window.

And reflecting on pride in art in diverse places, I found a larger-than-life-size portrait on a recent visit to the Tommaney Library at Haskell Indian Nations University. A stunning portrait of Jim Thorpe by Steven Grounds hangs near the front desk. Artist Steven Grounds, from the Navajo, Euchee, Creek and Seminole tribes, graduated from Haskell in 2004. He works with urban styles and computer graphics to create murals and portraits of Native American people. Jim Thorpe’s heroic importance as the first Native American to win Olympic gold medals is acutely portrayed by the larger than life size of this image; he was a powerful and adaptable athlete whose ancestry included the Sac and Fox Nation, Citizen Band Potawatomi, as well as French and Irish family. See more images of Steven Grounds’ work, with this link, opens a new window.

Much more more rich and varied art is displayed throughout the campus at Haskell Indian Nations University. The wonderful collections of the Haskell Cultural Center and Museum are viewable by scheduling an appointment via the President’s office, phone: (785) 749-8497.

The Womxn of Color Mural is noteworthy public art added to the southwest corner of the library building. This mural is a visual celebration of diverse womxn of color (WoC) in our community, painted at the end of 2018. Officially named the Wak’ó Mujeres Phụ nữ Womxn Mural, these words translate the word womxn in Konza, Vietnamese and Spanish. Many womxn collaborated on this project, including Connie Fiorella Fitzpatrick as Project Coordinator. Connie noted one source of inspiration for her is the book Baca: Art, Collaboration & Mural Making, opens a new window; it features work lead by Judith Francisca Baca to create 'The Great Wall of Los Angeles'. There is a companion website for the WoC mural, [www.wocmural.com], that will include a histories archive about the womxn represented on the mural and checkout this Facebook page: facebook.com/wocmural.ks, opens a new window.

The African-American Quilt Museum, founded by Marla Jackson, is a historically connected, educational art resource. Marla is a quilt artist, historian, educator and the museum's owner; the museum is tucked inside the Independence Inc. building at 2001 Haskell Avenue. Find out more at this link, opens a new window.

Among my favorite Lawrence artists is Library Board Member Ursula Barnes Minor. Ursula makes colorful three-dimensional mixed media assemblages with beads, jewelry and other small objects. Many of her creations have human shapes with a foam head or torso as the base. Her life-long community involvement in Lawrence goes beyond art; in addition to being Vice Chair for the Lawrence Public Library Board of Trustees, she is President of the NAACP Lawrence Branch and a member of the Lawrence Memorial Hospital Diversity and Inclusion Council. Ursula noted a recent book of essays she loved was: Well-Read Black Girl: Finding Our Stories, Discovering Ourselves: An Anthology, opens a new window, edited by Glory Edim, a NAACP Image Award Nominee book. And sharing her art is also rewarding. She won a blue ribbon for 1st place in 3D art at the May 2019 Lenexa Art Fair and as a featured artist in Lawrence Magazine she made a custom design for the spring 2014 cover. She helped shape and support the Wak’ó Mujeres Phụ nữ Womxn Mural and an apropos image of Ursula is part of the mural. She’ll be showing work at Bizarre Bazaar November 29 & 30th. A few of Ursula's creations are included below. View more examples of Ursula's vivid artworks her Instagram page: [https://www.instagram.com/ursaminorart/?hl=en, opens a new window].

If I were to attempt making art I would probably create assemblages; I don’t know that I could work patiently with the small beads that Ursula Minor uses, but something about the combination or juxtaposition of different materials she puts together, side-by-side is aesthetically interesting!

Liza MacKinnon’s art consists of sculpture, mixed media, illustration and graphic design. See Liza's website here, opens a new window. She will be showing her work on the September 27 Final Friday at the Percolator and for a month after that. Liza shared a photo of her art and noted these details:

"Mary Sidney Herbert was best friends with Queen Elizabeth I and a friend of Shakespeare. She’s created from pages of her poetry and translations as well as digitally composed handwritten and typeset documents from the era. Trimmed with ribbon, quilled ruff and custom made wax seals depicting a bird from her coat of arms."

Here's what Liza said she' been reading:

"I’ve been on a time-travel kick this year, reading all that LPL has to offer. The best series I've found is The Chronicles of St Mary's, opens a new window by Jodi Taylor; it’s very compelling, informative and entertaining. I'm most interested in the rich descriptive narration of times long past, whether it is a lush time travel epic like Diana Gabaldon's Outlander Series, opens a new window, or a fluffy romp through Austen's world as in Confessions of A Jane Austen Addict, opens a new window by Laurie Viera Rigler. This preference fits well with my fascination with historic costumes and characters."

"I create wonderful, beautiful art that often tilts toward the absurd while incorporating elements of fantastic realism. Using my preferred mediums of gouache, ink and printmaking, I strive to tell a well-constructed story, using the panel as his delivery device. My influences are drawn from curiosity for the natural world and a love of mythology. seek out my artwork at my website, linked here, opens a new window.

I have a show at the Phoenix gallery opening on the July 26 Final Friday. And I have a project based residency at the Lawrence Arts Center that will culminate over Lawrence Print Week at the end of the September."

These are the books Matthew read in the last year that were inspiring or helped stimulate his creativity:

Books written and illustrated by Lawrence artists are included below. Also, if you are seeking more inspiration, my fellow Readers' Services colleague Ilka made a selection of books on art block, which is akin to writer’s block, link to her list here, opens a new window.

I hope this post has offered you the art news that inspires you to seek out and enjoy art-related happenings in town. I plan to be at as many of these events as possible; perhaps we'll even meet at one of these artsy opportunities!

Crop Art and Other Earthworks

The Tree Who Walked Through Time

A Is for Art

As the City Sleeps