Growing up, whenever I refused his advice or repeated a mistake my dad had warned me against, he was fond of invoking an expression that never made any sense to me: "Buy 'em books and buy 'em books, and they still eat the covers." All these years later, in my work at the library weeding and replacing damaged books, I still have no idea what it means. But after performing autopsies on thousands of books, I have learned that the consumption of book covers is not all that unusual. Nor are several other common causes of library book death, some grisly case studies of which I now share in the interest of raising awareness (and, more to the point, indulging the morbid curiosity of the general public).

Cause of Death: Scribbles

This insidious phenomenon is usually pretty basic—a ballpoint circle here, Brother and Sister Berenstain's eyes gouged out with a marker there, that sort of thing. 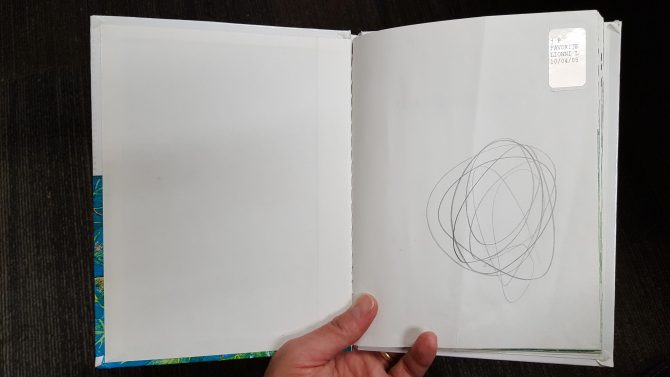 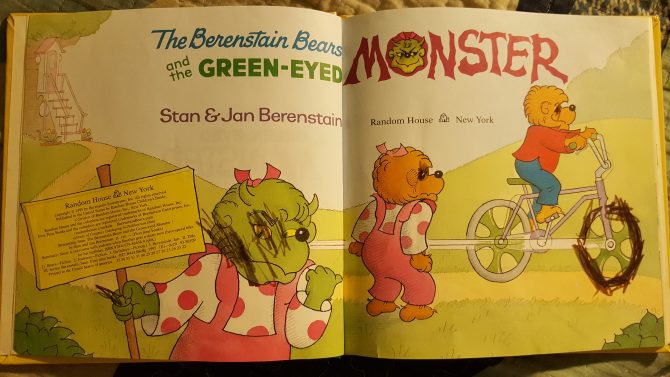 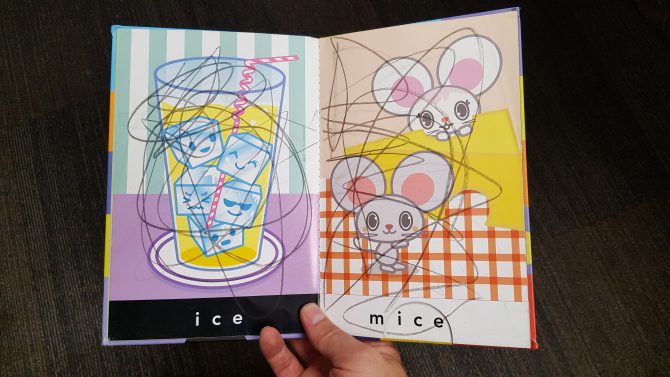 But every now and then, I come face to face with an advanced case of scribbling, such as this recent masterpiece. If only this young artist had begun on a different canvas, the wondrous scenario depicted here (which seems to involve a girl on roller skates, a 7-legged spider, a roly-poly, and a chicken, or maybe I've just had too much coffee this morning) might have been enshrined on a refrigerator door longer than anyone ever cared for it to be. 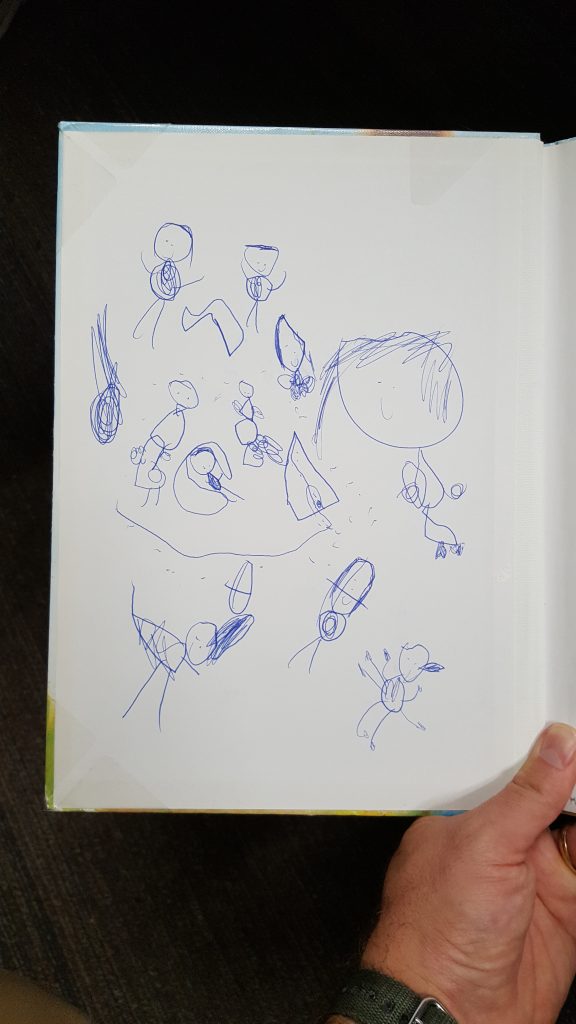 Cause of Death: Water Damage and Mold

There are bound to be casualties from bathtub bibliophiles and beach readers, which usually end up looking like some variation of this poor innocent. 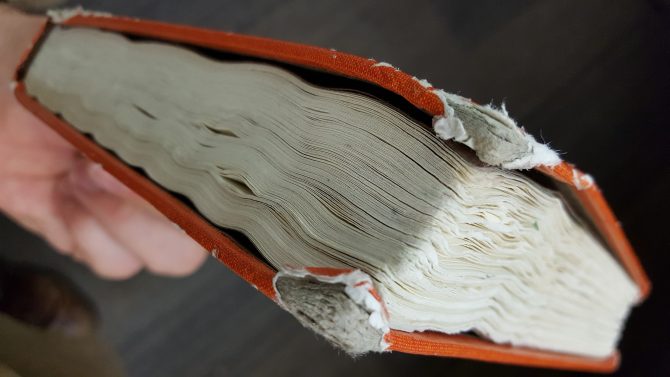 After the water comes the mold. When these cases reach me, they've usually been bagged by our heroic Materials Handling staff. Our system of communication relies on the infamous purple slip, which is filled out by the first to recover the item. In this case, Lorri's note says it all: "Saw the mold and quit looking." 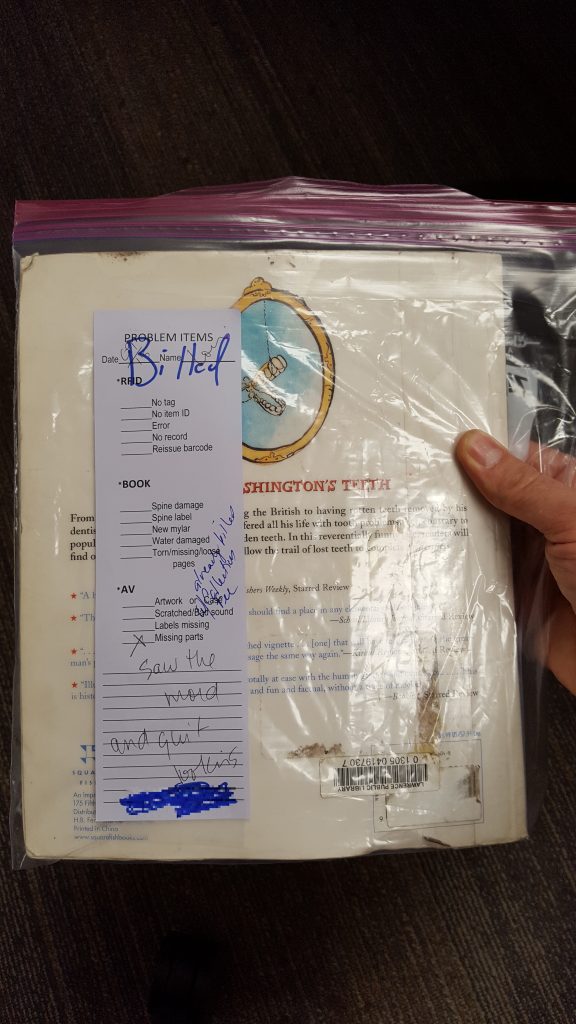 Other times, the mold can be a surprise. Who knew a book with a title like Worms for Lunch? would reveal such an unappetizing sight within? 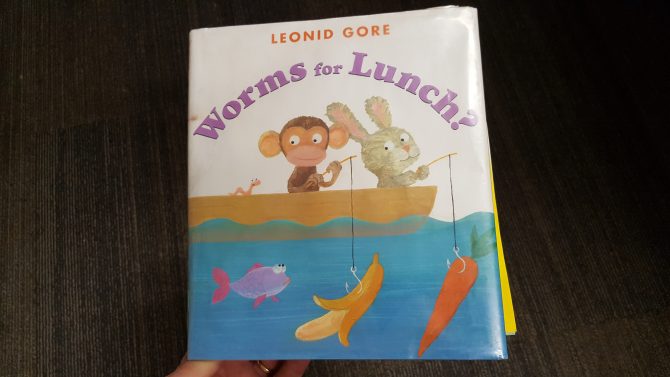 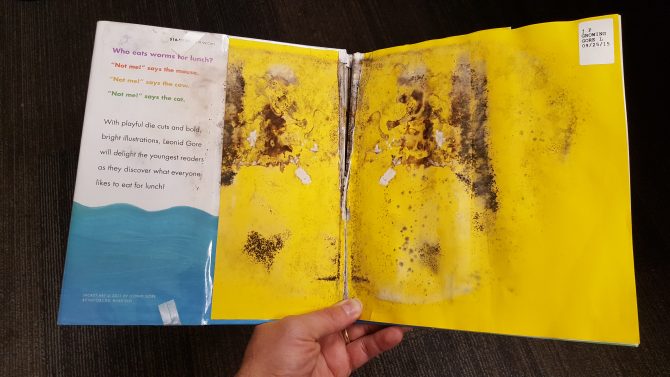 Then there is the occasional book damaged by a liquid other than water. The following case was a close call, as is detailed in the harrowing note written by Emily, the cataloger who reviewed the book for an updated spine label before she discovered what lurked within, and passed it along to me for replacement (on a day she happened to be tired of using purple slips). 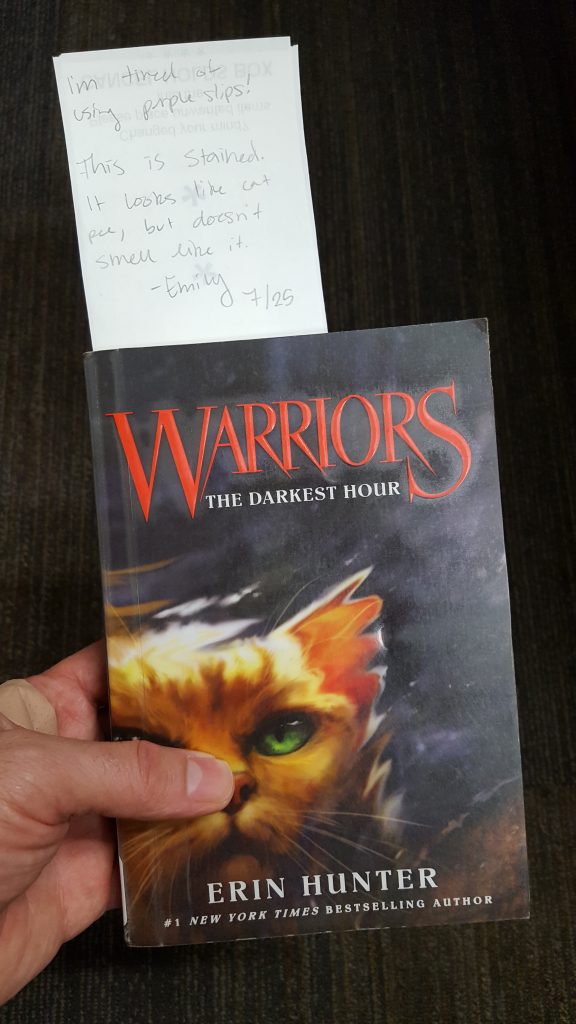 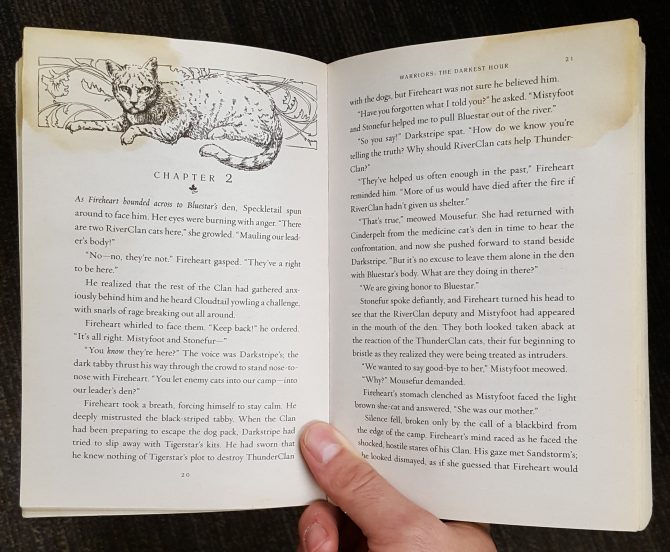 Cause of Death: The Munchies (including, but not limited to nibbling, chewing, and/or devouring)

It's amazing how often books are eaten. Usually the victims show most damage to their corners, such as this pair of relatively mild cases I saw last week: 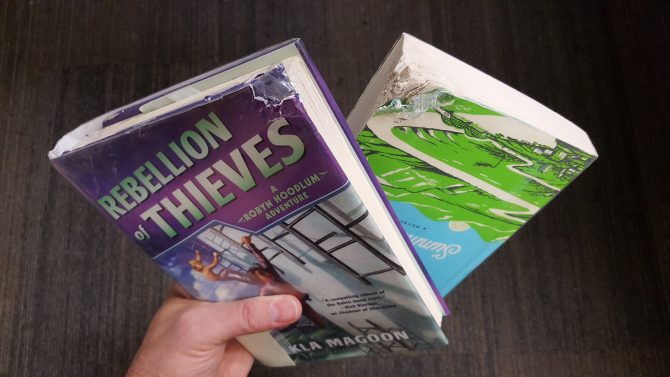 I often wonder what species of toothy creature is responsible for the damage. Sometimes, the animal's owner has come clean. 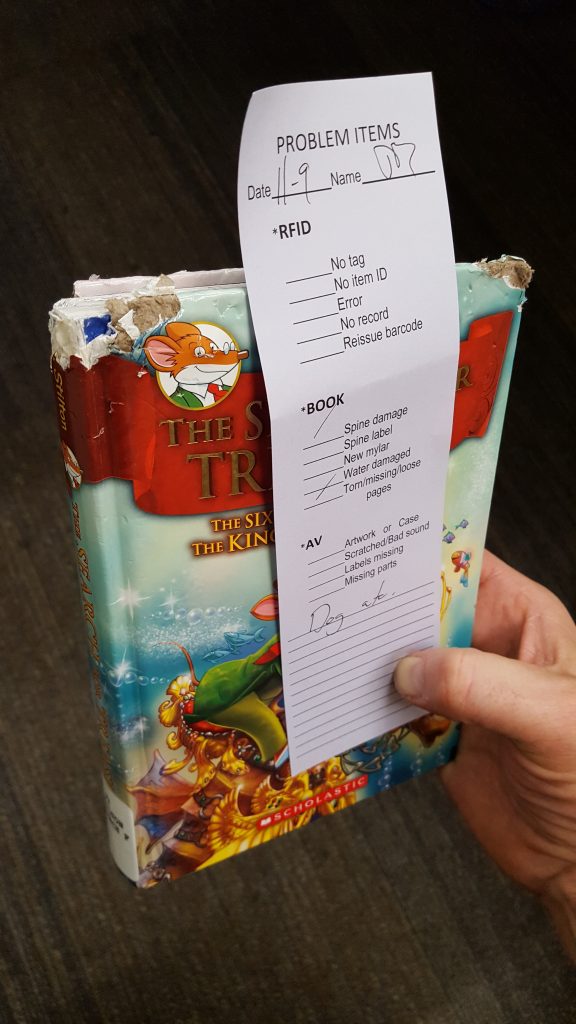 Often, the topic of the book can be a clue, as in this title, clearly mistaken for a carrot by a hungry favorite horse. 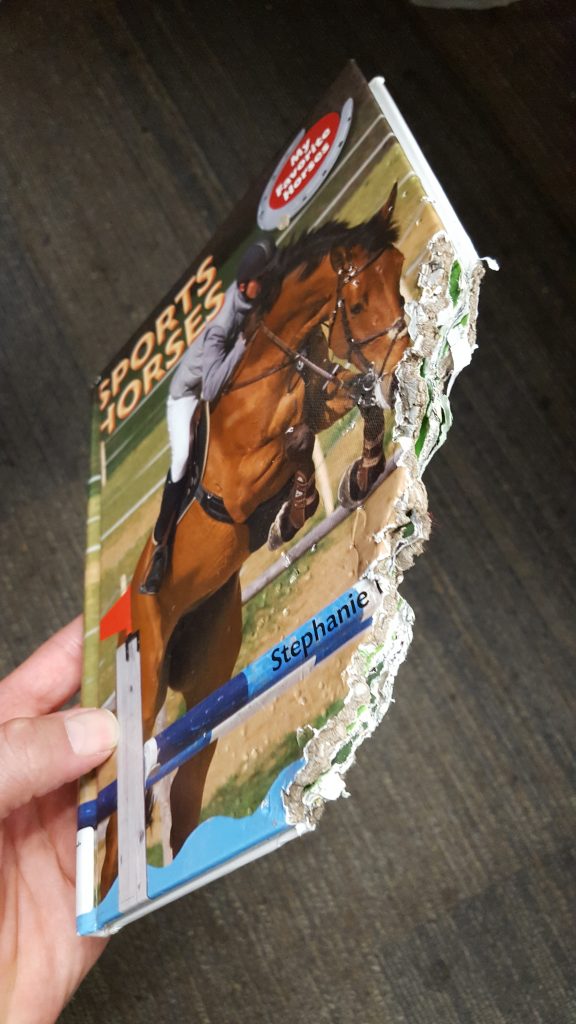 And sometimes the culprit isn't even an animal, as in the case of this Garfield book, which, as Cale points out on his purple slip, was "eaten by the sorter," the machine which checks in returned books (visible through several windows near the holds shelves). The sorter has great track record, but, like the rest of us, makes mistakes from time to time, too. 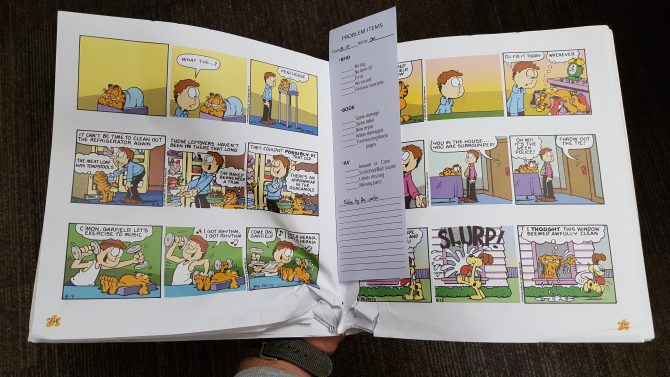 Cause of Death: Mack Truck

Until I became a librarian, I never knew how many books were run over by motor vehicles. Odds are most of these books were done to death by cars, but it's a lot more fun to picture a Mack truck doing the deed.

The Berenstain Bears do take a beating. This copy of The Trouble with Grown-Ups shows the tell-tale pockmarks resulting from the pressure of more than one of those 18 wheels on a book lying face down in the road. 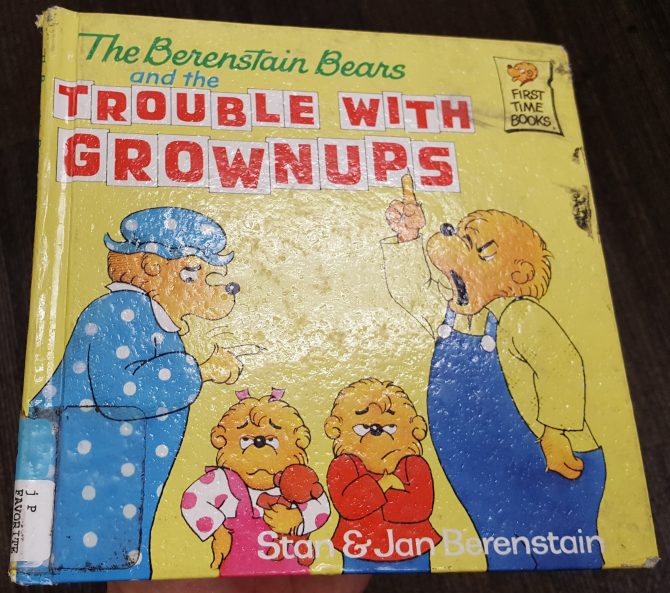 Then there is this sad copy of The Battle of Hackham Heath, found, as its purple slip explains, "in the middle of 6th Street" with an almost perfect tire print across its title page. 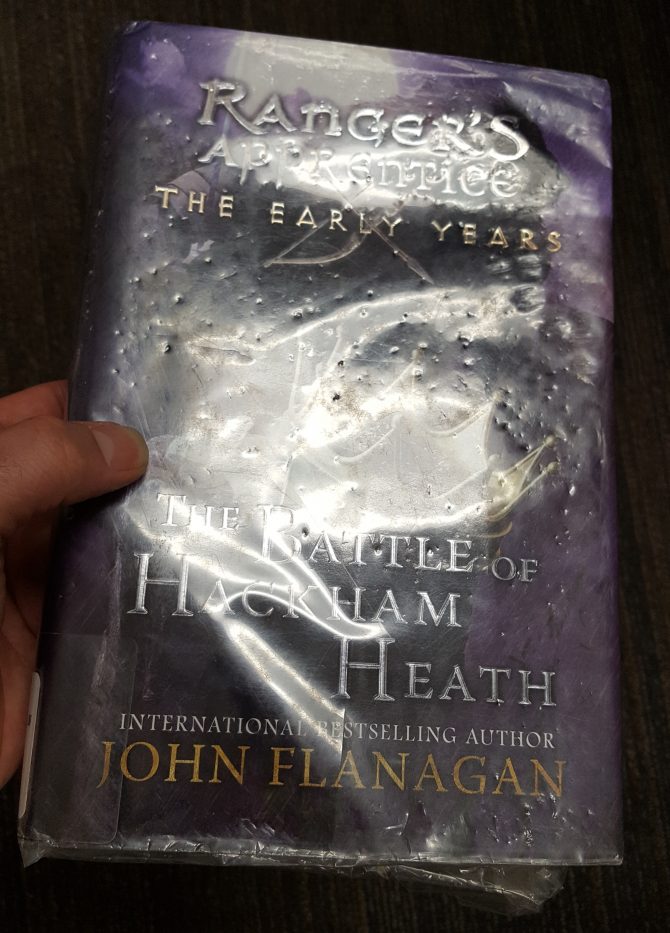 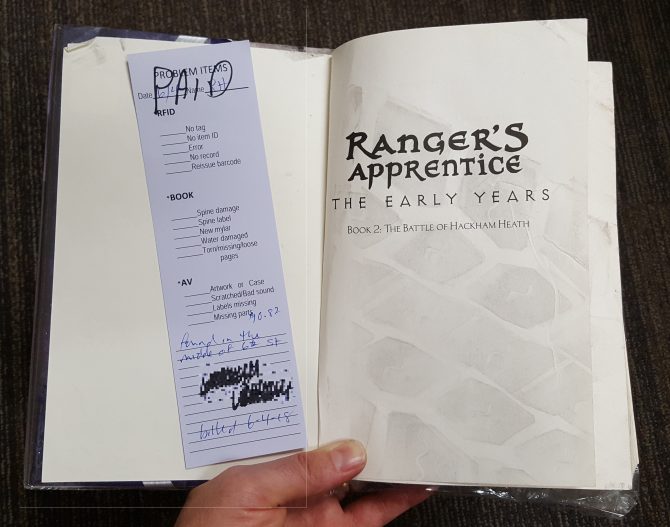 If I seem gleeful about my work doing postmortems on badly damaged books, it's probably because as a library user myself, I and the rest of my family have damaged library books in most of these ways, and a few others (and paid the full price, for there is no perk for LPL employees to let us off the hook when we return a book that's been run over by a Mack truck). We librarians are also a forgiving sort, for unlike the subjects studied by real pathologists, these books are easily replaced. And in a weird way, their demise is consistent with our "Unplugged" summer reading theme, for in their vulnerability to physical peril can be found one of the unsung pleasures of real books. I mean, do ebooks ever come to such eventful ends? I suppose the devices we read them on do, but those are a lot more expensive to replace. Like a skinned knee or a bad date, it's hard to picture a life fully lived out here in the real world without some kind of fiasco involving a library book.

And how's this for happy endings? I was able to replace almost every one of the books pictured above. Except Worms for Lunch?, which is probably a good thing.

The Berenstain Bears and the Green-eyed Monster

The Search for Treasure

The Berenstain Bears and the Trouble With Grownups

The Battle of Hackham Heath