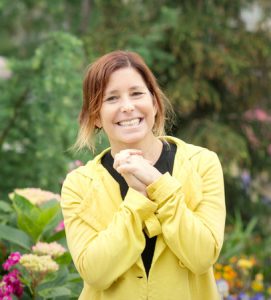 I first met Amy Krouse Rosenthal while scrolling through social media. I tucked away her article “You May Want to Marry My Husband” for later, not yet realizing there wasn’t a later to be had. In fact, many people first met Amy through that New York Times article which was published on March 3rd of 2017.

That was ten days before Amy died of ovarian cancer. She had written it as a love letter to her husband. When I met her again, through her obituary, I rushed back to find that article and read it with an aching wish to stop time, to bend it over on itself, to cancel it out and rewrite it.

“You May Want to Marry My Husband” left me sobbing and with a painful awareness of how much Amy and I had in common. We had both been married for 26 years. We each had three children with nearly the same age spread, hers just a few years older than mine. She had a husband whom she loved, deep and true. This husband, Jason, is nearly a caricature of The Perfect Husband, but he does exist and he was hers – flipping pancakes, fixing things around the house, admiring her whimsy, wearing amazing socks.

I am also married to my own “Jason” (minus the socks). The idea of writing him a letter like this hollowed me out. Amy and I both had a deep and abiding love of words, books, people, and serendipity. The similarities, which would have been delightful under other circumstances, made me feel heartsick.

Amy wrote many successful children’s books, but they were published when my kids were no long reading picture books, so I didn’t get to know her that way. I felt like we missed each other at a party. The day after she died, I checked out her memoir Encyclopedia of An Ordinary Life, published in 2005, and saw that it was noted as one of the ten most influential memoirs of the decade. She also has a second memoir, Textbook Amy Krouse Rosenthal published in 2014.

What I found in the Encyclopedia was a memoir like no other. This is not hyperbole. She includes orienting features and factual asides. Amy would like us to know that the word coffee appears 23 times. Awkward, 6. Love, 78. She includes a timeline of events that chronicle the authors, activities, happenstances, and preferences that lead her to write a memoir-cum-encyclopedia. The core of the book is her alphabetized existence, starting with (of course) Amy and finishing with You. Of all the entries, most of which I read with the sadness and regret of knowing Amy was gone, You might have been the most poignant of them all.

Encyclopedia works on a number of levels. If you like memoirs, it’s a unique take. If you avoid memoirs, please know it is devoid of navel-gazing and woe-is-me and humble-bragging. This is a different kind of memoir. Take her entry on Bowling: It would be difficult to convince me that leaning has no effect whatsoever on the outcome of my bowling. Or Gas Tank: Every. Single. Solitary. Time I go to get gas I have to lean out the window to see which side the tank is on.

These are random entries collected from notes she made over years, specific to Amy and yet universal to us all. We chuckle in self-recognition and at the same time know a little bit more about this person. And then you read other entries. Distraction: I recognize that everything I do, from my work to going to the movies to raising children to vacuuming, might also be viewed as just one big distraction – Hey, look over here! And now, over here! – from belaboring the real issue at hand: One day I’m going to die. Her words strike true and heavy with meaning.

This is a book that I would have loved regardless of when I found it. I have an affinity for marginalia, side-jogs, and searches for meaning – all my boxes are ticked here. I love that several of the entries are cross-referenced and contain deep dives (Childhood Memories is a chronology: “1977 – Uses Nair for the first time”.)

I love that some of the entries are interactive, and she invites the reader to email her through her website. In one entry, she agrees to bake the 100th emailer a pie and mail it to them. I mourned no longer being able to create performance art with her through these books. Amy took her artistry beyond just writing. She made participatory and community-based art. The Beckoning of Lovely is just, well, lovely.  She also has multiple Tedx talks. Here’s Amy, cheering on those running the Marathon of Life, literally and figuratively.

I am devastated by and have cried over Amy’s death, not because I knew her when she was alive (though I have the sketch of her in her open-hearted work), but because a light has gone out too soon. Those who spend their time here on earth productively, beautifully, with the goal of human connection and uplift? Those losses hit us the hardest. Amy lived a life I found so very familiar and I’m forced to face my mortality through hers. I wonder about my own life and what I’m creating. What is my Encyclopedia?

A unifying thread through Amy’s memoir and videos is meaning. Those little coincidences that we grasp and use to navigate our way through the waters of life. (I, like Amy, find meaning in things we both agree probably mean nothing, but we can’t stop looking for it.) My heart knows that I came upon this glorious, marvelous, ordinary person, one minute too late to have known her, for a reason.

Maybe the simple fact that I need to find a reason, and now will do so, is good enough. In Judaism, when someone passes, we say “May their memory be a blessing.” May Amy’s memory continue to bless us all.