Unsheltered is more than the title of Barbara Kingsolver's new book; it is the thoughtful overarching metaphor which connects the characters from two distinct time frames in one place. Kingsolver juxtaposes turmoil from today and the past, and yet wit and resilience are found throughout each storyline via gripping dialogue between the characters—their struggles and solace are found in vivid connections with nature and each other.

If you haven't read Barbara Kingsolver before, this is a wonderful introduction to her work. Kingsolver is a novelist, essayist and poet. Her lyrical writing is character-centered, emphasizing social justice and environmental biodiversity with a strong sense of place. She has been recognized with many awards, including the National Humanities Medal and the Dayton Literary Peace Prize for her body of work. Unsheltered has been nominated for the 2019 Andrew Carnegie Medal for Excellence in Fiction. 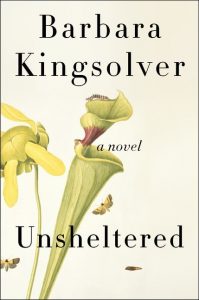 Just released on October 16, Unsheltered is one of the finest books to be published in 2018. Alternating chapters in this novel tell the stories of a present-day fictional family and a historical community from the 19th century (1870s). The transitions between chapters and the two time frames are such fun to read! Each new chapter begins by repeating the last phrase from the previous section. There are deep connections between the characters in each era. They share the same location—a collapsing house in Vineland, New Jersey. And so it seems that the house is miraculously still standing in the contemporary story. References to the structurally-unstable house represent deeper societal troubles; there is hope in the common and emblematic challenges faced by the characters and their enduring resilience.

The contemporary characters, burdened with heavy financial and emotional struggles, strive to reach the American dream of hard work being rewarded, civic-minded government leaders, and that society will commit to environmental stewardship before it’s too late for the health of the earth—especially concerning climate change. While they are in the midst of the 2016 presidential primary, the candidate named "Bullhorn" might seem familiar.

In the historical narrative, science teacher Thatcher Greenwood attempts to teach about science and the natural world but is challenged by religious dogma. While researching this book Kingsolver found an American scientist who collaborated with Charles Darwin and other noteworthy scientists; the real-life, trailblazing naturalist Mary Treat (1830-1923) becomes the most charismatic and intriguing character in the book. And this finding serendipitously roots the story where she did much of her studies in the Pine Barrens of New Jersey.

Note: The Indie Bookstore exclusive edition is available to purchase via Raven Book Store and other independent bookstores. My gratitude to Danny and Chris at Raven Book Store, Barbara Kingsolver and HarperCollins Publishers for sharing an advance reader copy of Unsheltered.