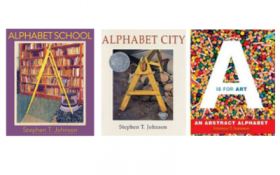 I have a deep sense of pride for our community’s most creative citizens; savoring local artists’ and authors’ works is often more satisfying than fine dining. Lawrence-based artist and author Stephen T. Johnson’s work is among the finest. His children’s picture books are award-winning: A is for Art: An Abstract Alphabet was named one of the Best Illustrated Books of the Year by the New York Times, and Alphabet City was the recipient of a Caldecott Honor, in addition to other accolades.

With Johnson’s newest book, Alphabet School, you can enjoy a visual celebration featuring images from Lawrence area schools. Vivid imagery depicts letters of the alphabet in ordinary objects at schools to encourage a child’s curiosity, observation, and comfort with a new school environment. This book can also be used as a classroom companion with Johnson’s previous book, Alphabet City.

Johnson visited the library for a very special storytime: Back to School with Stephen T. Johnson. He talked about the making of Alphabet School and how many of the ideas in this book came from students. Kids were called to find library objects that resemble letters, and whoever found the most won a signed copy of Johnson’s book.

You can also check out one of Johnson’s many fabulous public art pieces: Freedom Rings near Clinton Lake at the Wakarusa River Valley Heritage Museum in Bloomington Park at Clinton Lake.

He explains its concept and significance:

“Highly reflective circular hoops establish physically and conceptually the relationship of the Underground Railroad to the areas’ ten extinct and extant communities and revolve around a historical windmill tower, positioned in relation to the North Star, which functions as the focal point of the site.”

There is so much more to know about the work of Stephen T. Johnson; see his website here. He’s very involved in the community with his art: he is a finalist for public artwork at a new branch of the Johnson County Public Library, and he is teaching two drawing classes in the School of Architecture, Design & Planning at KU this fall. Johnson is also among the commissioned local artists selected for the East Ninth Street art project.

Checkout more rich, illuminating books by Stephen T. Johnson and other picture books that are beautiful, educational, and fun for younger readers on this list in the library’s catalog: Books for Kids by Lawrence Authors.

A Is for Art