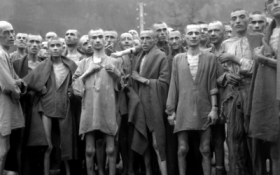 He who has a why to live for can bear almost any how. –  Friedrich Nietzsche

Two days after the election, I was in New York for business, and I found myself roaming the streets of Brooklyn. Everywhere I went, people seemed to be trying to make sense of the incredible divide in our country. Some people claimed to be shocked. Others claimed to be unsurprised, but there was a palpable sense of people searching for threads of understanding they could weave into substance while absorbing the outcome of a long and contentious campaign.

I overheard snatches of conversation in the subways, bodegas, and cafes. I saw the growing wall of post-it notes in Union Square Station, filled with people sharing their reactions. In a very “New York moment”, I conversed with my Pakistani cab driver, a man with a Master’s degree in Psychology and Computer Science, who moved to New York in 2014 and is still searching for work in his field. He was very eager to know my thoughts on the election, but he was more circumspect about sharing his own.

This is probably why, when I wandered into the charming Word Bookstore, looking for what the booksellers in NYC were showcasing, I felt compelled to pick up the classic Man’s Search for Meaning by Victor E. Frankl. If I saw nothing else during my time in NYC, I saw a mass of humanity grappling with a sea-change. They were talking through theories about what happened, and why it happened, and what to do next. Had I been on social media (which I had been trying to avoid for a while), I’d have seen the same thing. This was my read of the zeitgeist: people are searching for meaning – both within themselves and in a world that appears to be making less sense to people, no matter who they supported in the election.

Frankl, MD, PhD, originally published Man's Search for Meaning in 1959. He had been working as a therapist in Vienna and creating the basis for his practice prior to being arrested by the Nazis. As a survivor of four concentration camps, his work and his hope of finishing the book and seeing his pregnant wife again sustained him.

What he learned there shaped his theories and confirmed his beliefs, that even when humanity is tested to the utmost degree, it still exists. Frankl divides the book into two sections to increase understanding; first, he shares his lived experiences in the camps and second, he introduces his therapeutic doctrine, Logotherapy.

The basis of logotherapy is relatively simple – our desire to have our life mean something motivates us beyond all other things. This contrasted with other popular theories of the day, which posited that either pleasure (Sigmund Freud) or power (Alfred Adler) were, in fact, our main motivators as humans.

Frankl makes a compelling argument that people who have something to be responsible for, who have a goal, are the most likely to survive. This fact he saw time and again in the camps, and it has been verified with research from other prisoner of war camps and more recently with residents of nursing homes who are given animals or plants to care for.

While Frankl would stop short of sharing with us The Meaning Of Life, he did teach that there are some things that were essential to all humans in the search for their own meaning of life.  He writes,

According to logotherapy, we can discover the meaning of life in three different ways (1) By creating work or doing a deed; (2) by experiencing something or encountering someone; and (3) by the attitude we take toward unavoidable suffering.

(Please note Frankl stressed it must be unavoidable suffering that we may rise above it – continuing to endure suffering you can control doesn’t make you a hero, it makes you a masochist.)

Further, Logotherapy issues the categorical imperative “Live as if you were living already for the second time and as if you had acted the first time as wrongly as you are about to act now.”  Spending years on the cusp of death himself, and surrounded by others who were balanced on the edge of that knife, Frankl saw clearly what people regretted, wished for, took comfort in– what they lived for.

An essential belief of Logotherapy is that humans are free to chose their reactions to circumstances, no matter how extreme the circumstance. As long as a person is engaged in being responsible for something, has love for someone other than themselves, and can find meaning in suffering, their humanity remains. These three things are paramount in our ability to find meaning – it is through transcending the self (by doing works in and of the world, not just internal work) that one actualizes the self.

A thought that I find useful for the times we live in is that Frankl, who witnessed the very worst, the very lowest that humans can sink to, still remained convinced that no one is incapable of choosing rightly at any moment, that we should never count humans out. We always retain our capacity for choice and must continue to choose rightly, no matter our surroundings.

He reminds us that the same humanity that built the gas chambers was also the humanity who stood upright and unbroken, with prayers on their lips as they perished. Frankl was given the unwished-for task of bearing witness to the heights and depths to which humanity can achieve, and, in sharing it with world, found his meaning.