I'm not claiming powers of prescience or anything, but the weird thing is my last blog, written in early January, was about viruses wreaking havoc all around the globe. Computer viruses, but still...

Now it's mid-April, which usually means it's time to celebrate warmer days, the return of migrating birds, and the new crop of spring books. But there's this virus wreaking havoc all around the globe. At the same time, our house is (still) on fire.

Which especially means it's time to celebrate warmer days, the return of migrating birds, and the new crop of spring books. And work harder at putting out the fire.

But everything is so unpredictable! We're stuck in a new routine (most of us), wondering what's next, sucked into cyberspace where we alternate between obsessing over headlines and totally wasting time -- or rationalizing how it's not really wasting time. The numbers of awesome offerings streaming before us are increasing faster than the Johns Hopkins Covid tracker. Explore the Great Barrier Reef with David Attenborough! Tour your favorite museum or gallery! Watch amazing musicians perform your favorite piece "alone together"! Listen to a reading by your favorite author!

Granted, such things have been available for years, but sheesh. About those migrating birds, though. Unlike the movies and the music, they aren't streaming like they used to. Seventy percent fewer than when I was born (I swear it's not my fault).

One of the features of Lawrence’s now-postponed Paper Plains Literary Festival that I was most looking forward to was hearing author, artist, and birder extraordinaire David Allen Sibley. He of innumerable guidebooks has a brand-new book out, called WHAT IT'S LIKE TO BE A BIRD: FROM FLYING TO NESTING, EATING TO SINGING--WHAT BIRDS ARE DOING, AND WHY (First sentence: "Birds are dinosaurs." I'm in.) I've been waiting for the spring migrants, and with the library closed and the holds list on hold I'll have to wait for this too, but it promises to be as colorful and engaging as our avian friends.

(In case you were wondering, no, library employees aren't dashing in and grabbing things off the shelves while the getting's good. It’s strangely quiet in there). 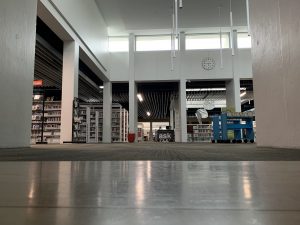 Can birds be afraid of heights? Did you know pigeons walking on a treadmill don’t bob their heads? Not a guidebook but an effort that started as a children's book, it’s large-formatted with bird-sized paintings, describing what's really going on with those familiar and maybe-not-so-familiar birds.

Surfing the web I found an interview with Mr. Sibley (who also can be found online, offering drawing lessons!), with illustrated excerpts from What It's Like to Be a Bird, which of course made me look forward to it even more. Then I found out that one of the best birder-writers out there, Terry Tempest Williams, has written the foreword to a new Library of America collection called American Birds: A Literary Companion. Naturalist and birder-writer Carl Safina also has a new one, BECOMING WILD: HOW ANIMAL CULTURES RAISE FAMILIES, CREATE BEAUTY, AND ACHIEVE PEACE describing how animals (birds included, natch) create culture. We're not the only ones spreading wisdom.

Both birds and this infernal virus offer the reminder that we’re all connected. Greta Thunberg’s new book, written with her family, drives this home. OUR HOUSE IS ON FIRE: SCENES OF A FAMILY AND A PLANET IN CRISIS is a memoir that shifts from family to planetary crisis, and makes plain that other things are part of the web, including feminism and mental health.

Back before all this virus stuff really kicked in, that is to say a couple months ago, writer Bill McKibben was continuing to add thoughtful essays to his decades-long investigation of climate change. Like Greta and others (Rebecca Solnit comes to mind), he points out that climate change includes social justice issues, which now includes coronavirus. As he said in a recent essay, “Above all, I think, a physical shock like COVID-19 is a reminder that the world is a physical place. That’s easy to forget when we apprehend it mostly through screens.”

I recommend a long walk at the Baker Wetlands. Stay well, stay connected.