"Youth" by Langston Hughes
We have tomorrow
Bright before us
Like a flame.
Yesterday
A night-gone thing
A sun-down name
And dawn — today
Broad arch above
The road we came
We march
Americans together!
We march!

Langston Hughes made his mark at the forefront of Harlem Renaissance literature and became the first African-American writer to support himself fully with writing, a career spanning over four decades. His eloquent writing continues to resonate with readers because his words sing of universal hopes and dreams. His iconic poetry is infused with the musical rhythms of blues & jazz. His award-winning debut novel Not Without Laughter is semi-autobiographical, reflecting his childhood experiences—coming-of-age in Lawrence during segregation. 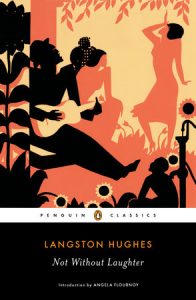 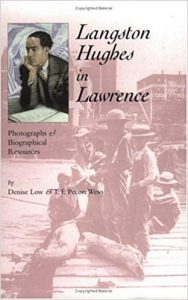 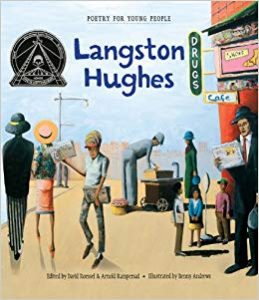 He lived with his grandmother in Lawrence for most of his childhood. A wonderful resource for discovering more about Hughes’s childhood and the inspiring legacy of his diverse family heritage is available in the book Langston Hughes in Lawrence, opens a new window by Denise Low and Thomas Pecore Weso. Low and Weso reveal that his family included abolitionist leaders who supported John Brown and the end of slavery, and his ancestry included African-American, American Indian, and European roots.

Championing a great author’s works in the city where he grew up is a natural way to demonstrate pride of place while also celebrating that author. Many landmarks in Lawrence reflect Langston Hughes's connections here. The first line of his poem "Youth" is even quoted on the outer walls of Lawrence's City Hall building.

The personality of Lawrence reflects that optimism of working toward social justice—and we march on! For Lawrence to pay homage to Langston Hughes is complicated; to reconcile that our native son experienced racism here is starkly hypocritical in light of the fact that we established our city on the principles of freedom and abolition of slavery. Incidentally, this contrasts with most other communities’ founding for commercial ventures. (Credit to Chuck Magerl for helping me recognize this distinction.)

One of the newest and most forthright place markers to honor Langston Hughes is on the Burroughs Creek Trail in East Lawrence, as part of the “Hike Through History” project envisioned by the late Henry Fortunato to teach local history with a sense of place. The pictured panel offers a frank discussion of the shameful historic traditions of Jim Crow segregation. Hughes was inspired to write about such experiences as an adult looking back to 1910, when he was eight years old. Using wit and irony, he reflected on being excluded from the former amusement park at Woodland Park in the chapter “Children’s Day” in his novel Not Without Laughter and also in his poem “Merry-Go-Round.”

The poem "Youth," quoted above and "Merry-Go-Round," below, are included in the illustrated book Poetry for Young People: Langston Hughes, opens a new window. Both poems really sing to me and connect to this poet’s childhood. "Merry-Go-Round" provides a richer understanding of a child’s feelings of pain and confusion experienced from Jim Crow segregation.

"Merry-Go-Round" by Langston Hughes
Where is the Jim Crow section
On this merry-go-round,
Mister, cause I want to ride?
Down South where I come from
White and colored
Can't sit side by side.
Down South on the train
There's a Jim Crow car.
On the bus we're put in the back —
But there ain't no back
To a merry-go-round!
Where's the horse
For a kid that's black?

A new mural in memory of Hughes, recently painted inside New York Elementary School, will be unveiled at the start of the 2018-2019 school year. ​This hopeful quote is part of it: “I have discovered in life that there are ways of getting almost anywhere you want to go, if you really want to go.”

I’m not familiar with the Lawrence school curriculum, but I feel like every young adult in Lawrence would benefit by reading and discussing the book Not Without Laughter. There is a lot of understanding to be gained in empathizing with the characters as well as appreciating this novel as classic regional literature.

The work of the Langston Hughes Center of KU also continues this author’s advocacy. The Center is “a hub of critical examination of black culture, history, literature, politics, and social relations.”

More still, a big documentary project is in the works, a collaboration of the Lawrence Arts Center with many scholars from KU and Yale, being funded by a grant from the National Endowment for the Humanities. The tentative release date of the full-length film is early 2020; more about the project can be found here.

I have a deep gratitude for this author’s thoughtful, visually-descriptive and plain spoken words; he speaks to everyday people like me. And his work has lead a way forward for social justice before we had a worn path to follow. There is much more to learn from Langston Hughes's works and the murals and other ways Lawrence has honored our most profound and prolific local author. Let our memories live on as we continue to celebrate “bright before us like a flame”!