“It’s based on a true story!” is often a dealmaker when telling kids about a book. Part of the magic of my favorite children’s book author, Steve Sheinkin, is that all of his books are true stories that read like amazing adventure novels. An ex-history-textbook writer, Sheinkin now has the freedom to focus on the slices of history that fascinate him most. He’s written about the mega-traitor Benedict Arnold, the atom bomb’s complex role in WWII, the extra-dark side of the Vietnam War, and so much more. Of Sheinkin’s books two are in a duel for my librarian heart: Bomb and Most Dangerous. 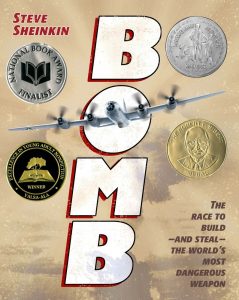 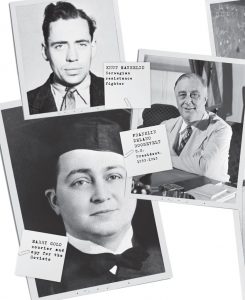 Bomb: The Race to Build and Steal the World’s Most Dangerous Weapon is an excellent combination of revealing personal stories and big picture events. The book includes an endearing anecdote about a genius scientist involved in creating the bomb, Robert Oppenheimer. While on a date, he seemingly disappears. After hours alone in a car, his date calls the police to search for him. It turns out that when he stepped out of the car he became lost in his thoughts, walked home, and fell asleep! Oppenheimer was the ultimate absent-minded-genius professor! We then follow him as he gets involved in the project that leads to the development of the atom bomb. In addition to the scientists, we learn about the spies that were out to steal the plans for the bomb, including the unlikely nice guy, Harry Gold. We also learn about the brave people who went on dangerous stealthy missions to destroy the Germans’ heavy-water production in Norway as an effort to stop them from creating their own atomic bombs. These stories are set against the rise of the Nazi party and the threat of it’s spread. The result is a book that reads like a thriller as you sweat along with all the people that you’ve grown to know and care about. 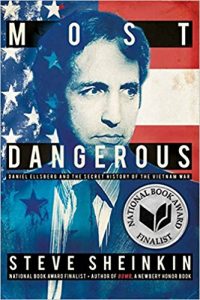 Most Dangerous: Daniel Ellsberg and the Secret History of the Vietnam War is another  edge-of-your-seat read. At the beginning of the book we learn that Ellsberg lost his mom and sister in a car accident when his dad fell asleep at the wheel. Ellsberg was also in the car and this horrible split second stays with him. We also learn about Ellsberg’s incredible genius. His ability to analyze complex information takes him to the Ivy League and then to the highest levels of the intelligence community in Washington D.C. From this elite vantage point he discovered a top-secret history of the Vietnam War that contained proof that the government was lying to the country. He then had to decide what to do with information that could change the course of history and how the American people viewed their leaders.

Sheinkin’s books are award-winning standouts in children’s nonfiction. They help the reader build empathy and to learn why different players in history made the choices they did. Sheinkin also has a new series geared for younger readers, Time Twisters, which features famous people from history (including Abraham Lincoln as a pro wrestler!) that escape from a textbook! If you’re looking for a writer to bring history to life, definitely give his books a try. Like they say, truth is stranger (and often more interesting!) than fiction.